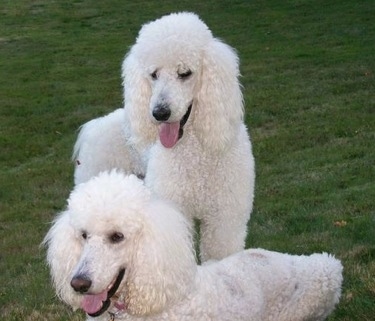 "Two Standard French Poodles, mother and daughter—the one on top is Chanel, and is the daughter. The one on the bottom is the mother and her name is Tella."

The Standard Poodle is a medium- to large-sized dog. When groomed to show dog standards the body is meant to give off a square appearance. It is approximately the same length as the height at the withers. The skull is moderately rounded with a slight but definite stop. It has a long, straight muzzle. The dark, oval-shaped eyes are set somewhat far apart and are black or brown. The ears hang close to the head and are long and flat. Both the front and back legs are in proportion with the size of the dog. The topline is level. The tail is set and carried high. It is sometimes docked to half its length or less to make the dog look more balanced. Dewclaws may be removed. The oval-shaped feet are rather small and the toes are arched. The coat is either curly or corded. It comes in all solid colors including black, blue, silver, gray, cream, apricot, red, white, brown or café-au-lait. While it does not make the written show standard, some breeders are breeding parti-colored Poodles. See grooming for different types of Poodle clips.

The Standard Poodle is proud, graceful, noble, good-natured, enjoyable and cheerful. This highly intelligent dog is one of the most trainable breeds. Some can be trained to hunt. The Standard Poodle is generally lower energy and often calmer than the smaller varieties of Poodles, but will become high strung if you do not give it the proper amount and type of exercise. It is sensitive to the tone of one's voice and will not listen if it senses that it is stronger minded than its owner, however it will also not respond well to harsh discipline. Owners need to be calm, yet possess an air of natural authority. It are not the type of dog to live outside in a kennel, as it enjoys being with its owners and dislikes being alone. It is generally friendly toward strangers, and is excellent with children. The Standard Poodle is good with other dogs. Some can make good guard dogs. Make sure you are this dog's firm, consistent, confident pack leader, providing daily pack walks to avoid separation anxiety and other unwanted behavior issues.

A long-lived breed, Poodles are, nevertheless, subject to many genetic diseases. Runny eyes, cataracts and progressive retinal atrophy, which may cause blindness. Allergies and skin conditions are common, possibly due to unskilled use of clippers or allergies to shampoo and/or color reinforcer. Hip dysplasia and ear infections are also common. They are prone to Von Willebrand's Disease. Brown Poodles tend to become prematurely gray. Prone to bloat, so it is wise to feed your Standard 2-3 small meals a day, rather than one large one.

If given enough exercise, Standard Poodles are relatively inactive indoors. They will be okay in an apartment if they are sufficiently exercised. A small yard will suffice.

The Standard Poodle needs to be taken on a daily walk. Although they adore water and love to go for walks, Poodles are not demanding as far as exercise goes, so long as they get their walk in. They however, will keep in better spirits and be fitter if given regular opportunities to run and play off the leash in a safe area. The Standard retains its sporting instincts, has great stamina, and needs more activity than the smaller varieties.

Extensive grooming is needed if the dog is to be shown. Poodles must be bathed regularly and clipped every six to eight weeks. Clean and check the ears frequently for wax or mites or infection and pull out hairs growing inside the ear canal. The teeth need regular scaling. Since the coat does not shed it needs to be clipped. There are several different types of Poodle clips. The most common for pet owners is an easy care clip called a "pet clip," "puppy clip" or "lamb clip," where the coat is cut short all over the body. Popular show clips are the English saddle and the Continental clip, where the rear half of the body is shaved, bracelets are left around the ankles, and pom-poms are left on the tails and hips. The AKC standard allows for a dog under a year old to be shown in a show-style puppy clip which has special requirements such as a pom-pom on the end of the tail. Other clip styles are the modified continental clip, town and country clip, kennel or utility clip, summer clip, and the Miami of bikini clip. Poodles shed little to no hair and are good for allergy sufferers.

The Poodle has been known throughout Western Europe for at least 400 years and is depicted in 15th century paintings and in bas-reliefs from the 1st century. The subject is controversial of where the dog was officially developed and no one really knows the breed’s true country of origin. France has taken a claim on the origin, but the AKC gives the honor to Germany, where they say it was used as a water retrieval dog. Other claims have been Denmark, or the ancient Piedmont. What is certain is that the dog was a descendant of the now-extinct French Water Dog, the Barbet and possibly the Hungarian Water Hound. The name "Poodle" most likely came out of the German word "Pudel," which means "one who plays in water." The "Poodle clip" was designed by hunters to help the dogs swim more efficiently. They would leave hair on the leg joints to protect them from extreme cold and sharp reeds. The hunters in Germany and France used the Poodle as a gundog and as a retriever of waterfowl and to sniff out truffles laying underground in the woods. The French started using the breed as a circus performer because of the dog's high intelligence and trainability. The breed became very popular in France, which led to the common name "French Poodle," but the French people actually called the breed the "Caniche," meaning "duck dog.” The Toy and Miniature Poodle varieties were bred down from larger dogs, today known as Standard Poodles. In the 18th century smaller poodles became popular with royal people. The three official sizes are the Toy, Miniature and Standard Poodle. They are considered one breed and are judged by the same written standard but with different size requirements. Breeders are also breeding an in-between size called a Klein Poodle (Moyen Poodle) and a smaller Teacup Poodle. Some of the Poodle's talents include: retrieving, agility, watchdog, competitive obedience and performing tricks. 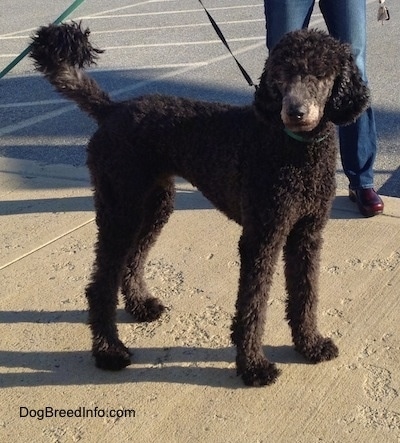 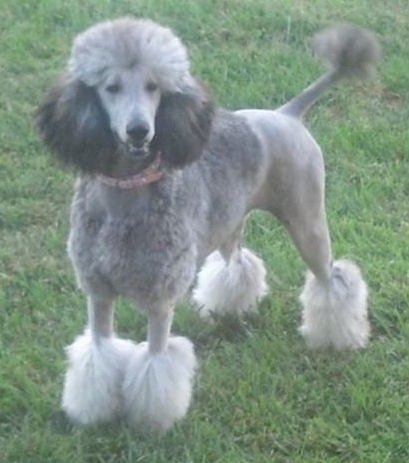 Baby Sarah the Standard Poodle at 1 year old — "Sarah is a gorgeous blue and silver phantom Standard Poodle. She has been shown and she is very full of herself and thinks she is a princess." Photo courtesy of Teampink Kennels 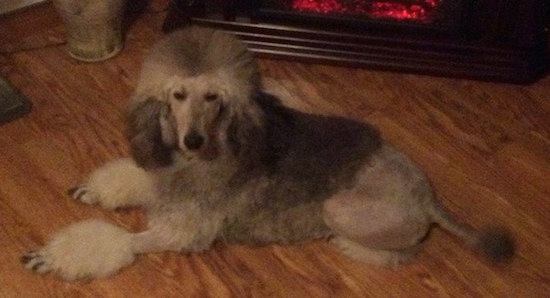 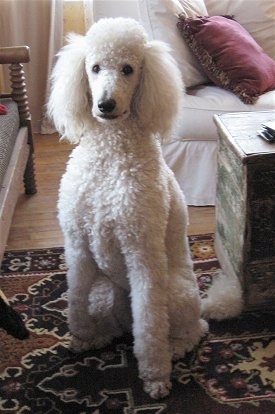 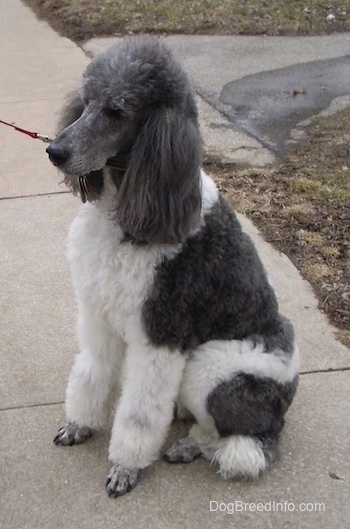 Bunker the parti-colored Standard Poodle at 11 years old— "Bunker is a certified Therapy dog. He visits nursing homes at times but mostly goes to Kindergarten class to read with the kids. He is very calm and obedient." 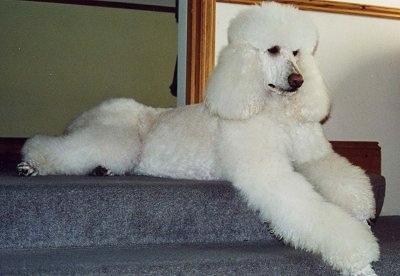 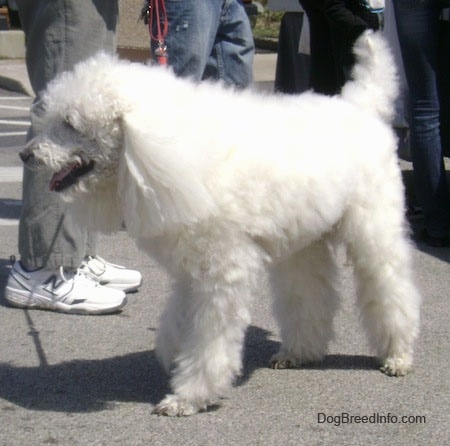 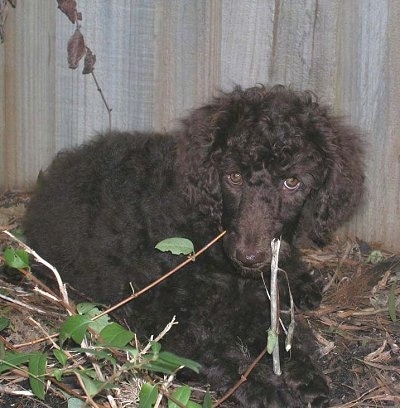 Sasha the Standard Poodle as a puppy at 16 weeks old 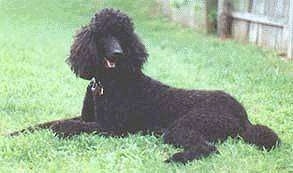 This is 9-year-old Merlin. He has titles in obedience, Flyball and therapy. 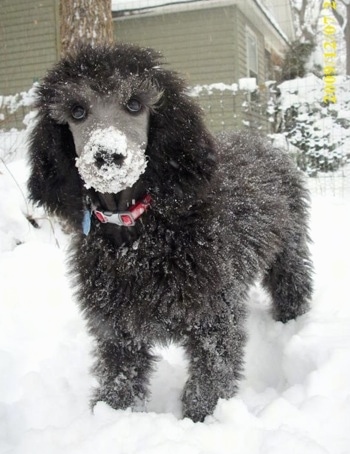 "This is our Standard Poodle puppy playing in the snow. I took it on the day of his first snow. He loves eating snow and running around in it. He is 15 weeks old and already weighs 30 lbs. He is a fantastic, laid-back boy." 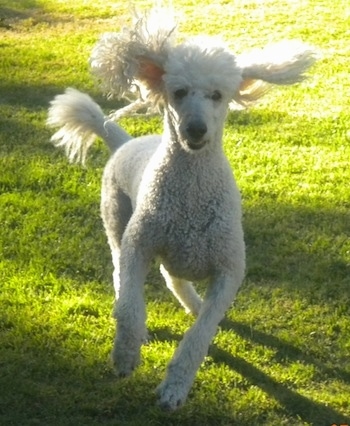 "I live in South Africa and have a very big yard. I am not young anymore and have taken in and rescued a lot of Standard Poodles, all with lots of issues. I think, after watching the Dog Whisperer that my success with these dogs was the fact that I walked them, proper, not them walking me. Also the big space, the weekend outings and the swimming pool to drain their energy. I had only one that didn't like swimming. They all came to me at different ages. Amore in the photo may have been 7 or 8 years old. She is slowing down a lot and slow to get up sometimes. Hard to believe after seeing the photo. She used to bolt through gates at lightning speed, that’s over now. She is a pro on a leash and got the calmest attitude even with all the dogs barking at us. I have taken in another 2 of 8 months old and they are still a handful!! The male had food aggression. He will now eat out of my hand and I can now handle his food, but with other dogs he still very unpredictable. In the winter they are groomed like show dogs, but in the summer they do a lot of swimming every day." 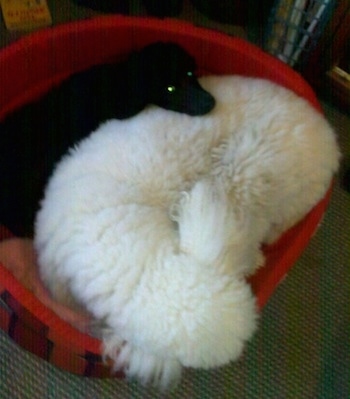 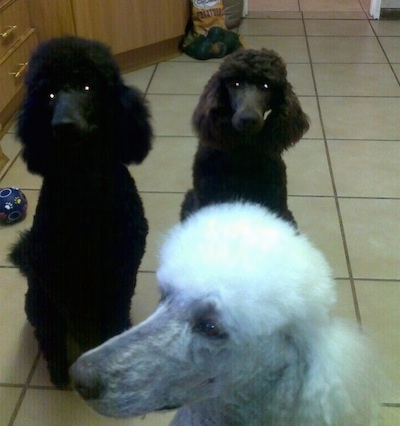