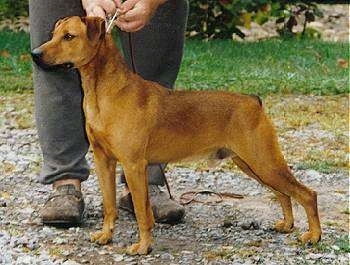 The Mountain Cur is bred for its working ability. It is a stocky, rugged, working dog with a genuine, though somewhat generic, Cur appearance. The heavy coat tends to be longer than that of the hounds, but still basically short. It is smooth or rough with a soft, fine undercoat. Colors include, yellow, brindle, black, brindle and black, often with white points. Breeders proudly report that 50% or more of puppies are born with bobtails. Many are born with dewclaws on their hind feet and some with two on each foot. Very stocky, wide and muscular with a strong, wide head and a short, higher set ear. The neck is strong and muscular. The eyes are usually dark with a prominent, expressive expression. The head is dome flat and wide between the eyes. The muzzle is heavy. The ears are short to medium, set high with control. The catlike feet are strong and well-muscled, set for speed. The straight legs are muscular. The chest is deep and the back is straight.

This is not a submissive, easygoing dog. With the toughness and courage to confront a very angry, very large cat, these Curs have learned to be decisive and dauntless. Usually silent on the trail, they make consistent guard dogs, but certainly are not ideal for suburbia, where there is no call to work. Trailing ability varies with strains, but they have enough nose to follow game and many carry treeing ability. Some lines are bred for tree dogs and others for baying. This very tough large-game, raccoon and squirrel hunter is willing to face a squealing razorback or an angry wildcat when it is cornered. It has a strong desire to please its master. Very protective of the property and family; without an owner who is more dominant than itself, it can become over-protective. The Mountain Cur is noted for his courage. This hunting dog will catch a mad bull head-on in the nose and will hold his ground even against a bear when threatened. The objective in training this dog is to achieve pack leader status. It is a natural instinct for a dog to have an order in its pack. When we humans live with dogs, we become their pack. The entire pack cooperates under a single leader. Lines are clearly defined and rules are set. Because a dog communicates his displeasure with growling and eventually biting, all other humans MUST be higher up in the order than the dog. The humans must be the ones making the decisions, not the dogs. That is the only way your relationship with your dog can be a complete success.

The Mountain Cur is not recommended for apartment life. It is bred for work and will be happiest with a job to do.

The Mountain Cur is a very active working dog that needs a lot of daily exercise. When not hunting, it needs to be taken on a daily, long, brisk walk or jog. While out on the walk the dog must be made to heel beside or behind the person holding the lead, as in a dog's mind the leader leads the way, and that leader needs to be the human. In addition, it will benefit from a large, safe area where it can run free. This breed enjoys outdoor activities and sports.

The short hair of the Mountain Cur is easy to groom. Occasionally comb and brush to remove dead and loose hair. Bathe only when necessary as bathing can dry out the skin, causing skin problems. Keep the ear canal free of excess hair and the toenails clipped.

Many terrier-type Curs were brought over with immigrants from Europe to America and mated with the native Curs. This uncertain, rather sordid combination of canine produced an off-beat Cur able to adjust to the ways of life of the pioneers and the Indians. This historic Ohio River Valley prowler is believed to possess a whiff of the Indian Cur's genetic smoke, in addition to the influence of hounds and herders. He is used mainly as a tree or bay dog, but many are superb trailers as well. They originated at the time the United States was new and were particularly common in the Ohio River Valley. As frontiersmen and their entire families moved to open the West, their Cur Dogs accompanied them. Those that favor this breed say that besides the herding dog trait, there is a dash of "Indian Cur" (a pariah type dog) in their makeup. Although called "mountain" because of their particular advantage to settlers in wooded, wild areas, they did just as well in swampy or dry areas, or other places with harsh living conditions. The book "Old Yeller," about a boy growing up in frontier Texas and a dog, for which the book is named, is a typical Mountain Cur (unlike the movie, which starred a dog of Lab type). In the book, Old Yeller is a shorthaired, yellow bobtailed dog that hunts and trees, isn't afraid to fight a full-grown bear when it is threatened, and naturally goes for the nose when he faces a mad bull. The author is very explicit in describing this old-fashioned breed and its use to the pioneer. The name "Mountain Cur" is never mentioned in the book, however in those days, the breed really didn't have a name or an individual identity. The Mountain Cur dogs are slowly being sorted into individual types. The Treeing Tennessee Brindle, Stephens Stock, and the Mountain View Cur use to all be the same breed, but these have achieved enough individual identity to justify their own registering groups. By the end of the last world war, there were very few of these old-time Mountain Curs left. A few die-hard owners still maintained some stock in isolated swamps and remote mountain regions of the southeast. They are the oldest recognized Cur breed and are enjoying a recent rebirth, similar to the other Cur breeds. The Original Mountain Cur Breeders Association has registered the breed since the late ’50s.

The Cur dog was the first true, distinct, American purebred. Earliest lines can be traced all over the Southern United States, particularly near the Appalachian Mountains. Settlers brought European dogs along with them, primarily hunting hounds and terriers. These dogs were crossed with native dogs, most notable of which was the Indian Cur, and this unique type came to existence. Hounds brought excellent scenting ability and a loud, clear bay (although most Curs are known for their chop, and Hounds have a distinct bawl). Terrier blood added grit and tenacity to which no other type of dog could compare. Both the hound and the terrier are still to this day unmatched in quality compared to other dogs. While not considered a true shepherd type, the Cur also shared shepherd ancestry—early Beauceron, in particular. Though not a traditional herder, the Cur was used for rounding up rough stock. Texas Longhorn Cattle and feral pigs were what this dog had to handle—not regular cattle or sheep.

The modern Cur is still a traditional hunting dog. Seen still almost exclusively in the South, this farm dog is second to none. It can handle anything from squirrels and raccoons to bears, boar and bulls. Also, it is a first-class treeing dog. They are also above-average trackers; although they are not as efficient as the Coonhound nor are they vocal on trail. Curs are also highly possessive and protective of their family—a trait seen in terriers and often shepherds, but certainly not hounds. Therefore, they make excellent protection dogs. However, it is necessary to note that this breed is generally inappropriate as a pet. Although friendly and loyal, like most hunting dogs the Mountain Cur’s true nature is in the hunt, not in the home. Many people introduce other breeds into the Mountain Cur; however, with the exception of the Hound’s fine nose, this is not necessary as a good Cur should have all the right hunting dog traits. It has found recognition within its own registry, the OMCBA, or Original Mountain Cur Breeder’s Association and the United Kennel Club. 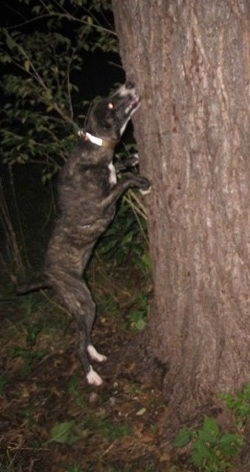 This is Ivy, a Mountain Cur at 8 months old treeing a coon. 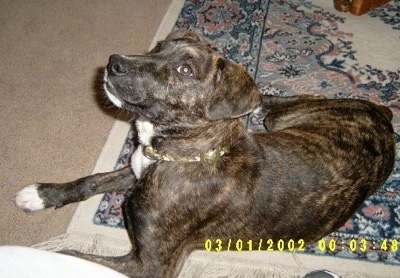 "This is Benny. He is a 4-month-old purebred OMCBA-registered Mountain Cur owned by Tina in KS. He was born at Castle Hill Mtn. Curs in MO. Benny is not used for hunting in his home and is a family companion. He is a very smart puppy and is still learning his good boy behaviors." 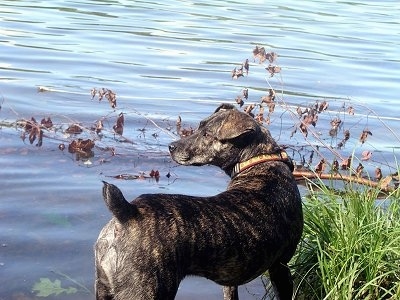 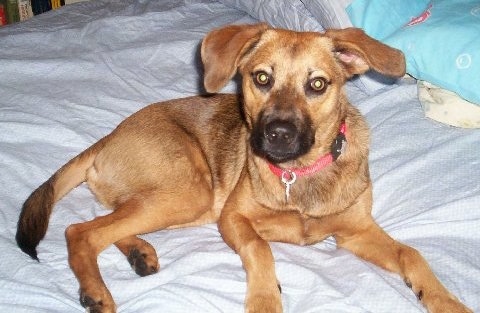 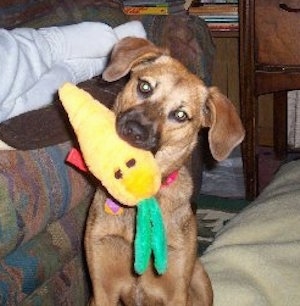 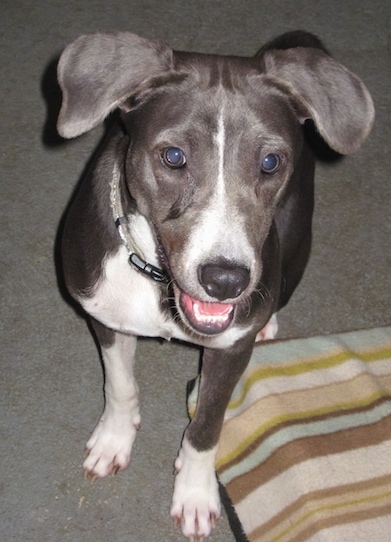 "I have a Mountain Cur that we got when she was about 9 weeks old, shown here at 1 year old. She is of a rare variety for the Mountain Cur breed. She is blue and white in color. She does not have the bobtail but the more curly variety for the breed. Most of her brothers and sisters born in the same litter were brindle with bobtails. She has NKC papers. Many people have said that this type of breed will not get along with cats and other small animals which I have found that if you teach them from a young age they will respect all animals inside the home. I do believe that this breed acts more like a coyote then an actual dog. At times she can be very precious and at other times very bold and brave. She loves games and seems to do well in a suburban setting with lots of exercise. She is walked daily and loves to play fetch. She does have true hunting instincts but only really display this behavior outside of the house. She is shy around strangers, not aggressive but very submissive." 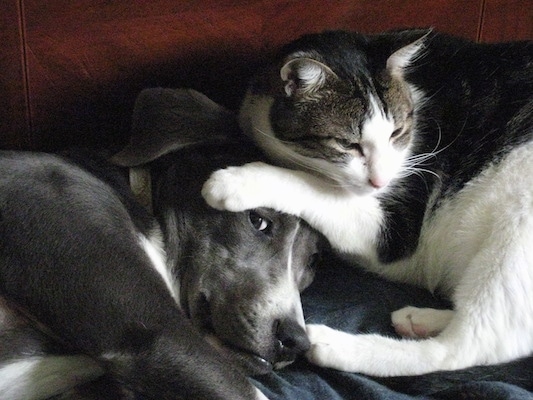