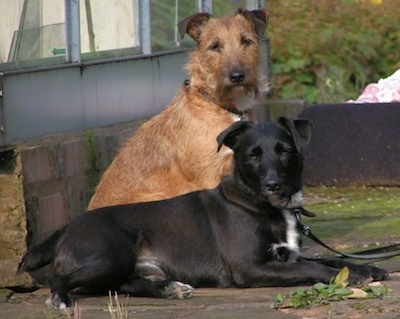 "This is a picture I took of my two dogs of Skippy and Scramel, littermates from a Jack Russell Terrier and a Patterdale Terrier. This was taken when they were 5 years old. Although brothers, they not only look different but have different personalities and habits. Scramel, the brown dog and smaller of the two is top dog and often chases his brother away from his food. He is very laid-back for a terrier and likes to make friends with everyone and everything but after the initial introduction becomes disinterested. He doesn't crave much affection, although likes to have the base of his back rubbed, and his favourite place is his bed! Unusually for a terrier Scramel has had a couple of illnesses, including an anal fistula, more commonly found in Boxers I believe. His favourite toy is a "tuggy toy" and he will cling on and be swung around for ages."

“Skippy is always looking for affection in the house. He is the one who will want to sit beside a human and be petted but when he is outside it is "kill first, ask questions later." He will attack anything from a mouse to a horse—anything that moves really, yet he is often a bit nervous, particularly about loud noises. He loves hide chew sticks and likes to play with stones. He also like to run and retrieve anything thrown for him, although is often reluctant to give up his "catch."

"They both love the snow and both love long walks in open fields where they can run until they tire themselves out."

The Patterjack is not a purebred dog. It is a cross between the Patterdale Terrier and the Jack Russell Terrier. The best way to determine the temperament of a mixed breed is to look up all breeds in the cross and know you can get any combination of any of the characteristics found in either breed. Not all of these designer hybrid dogs being bred are 50% purebred to 50% purebred. It is very common for breeders to breed multi-generation crosses. 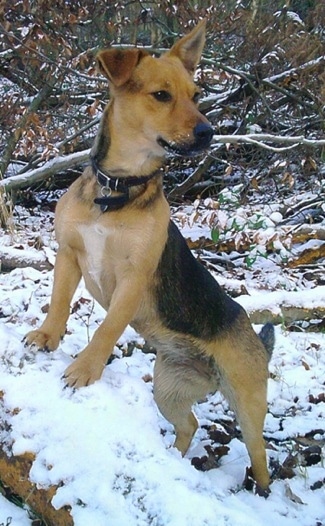 "This is my Patterjack. Her name is Kiba, which in Japanese means 'Wild One' or 'Fang.' She is a Patterdale Terrier / Jack Russell cross. She is a year and four months old in this picture. As with Jack Russells and other ''ratter' type terriers she loves to bury and hide her treasures in bizarre places. We will find pigs’ ears in the laundry sometimes and also behind the TV! She loves to bask in the sun and will stay out in the yard all day if she can, sniffing the air and lying back on the grass. Her most favorite place to observe the outside world is the window sill, where she will sit for hours watching people walk by.

"She is a pleasure to walk in the woods, where she will run riot in the bracken and undergrowth sniffing out all the little creatures. She also loves to chase squirrels though has never caught one yet! Our main day walk usually lasts an hour and she goes for shorter walks in the morning and at night. We watch Cesar Millan and have applied his mention of making a sharp 'SHH' noise if Kiba is misbehaving or is trying to be too dominant. It works wonders and she backs away indefinitely." 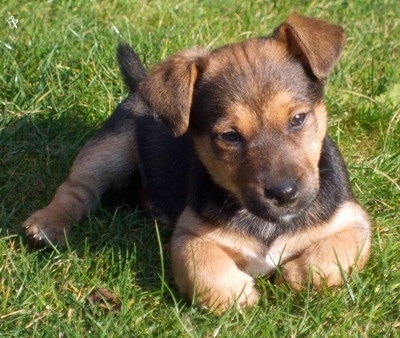 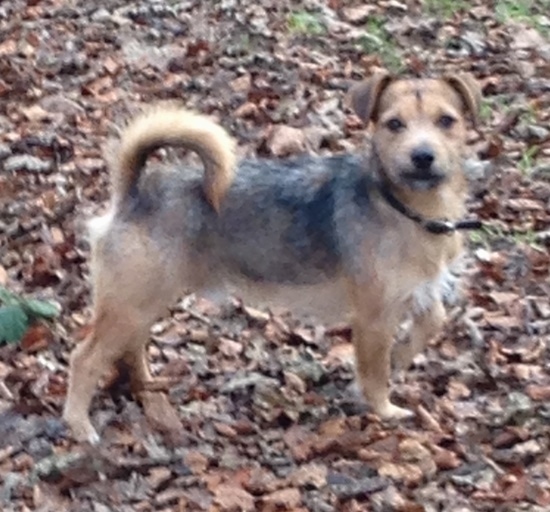 Nova the Patterjack Terrier at 14 months old—"This is my 14 month Patterjack Terrier, Nova. I keep him in great condition 2 long walks a day and keep him on a strict diet. He's a beautiful lil dog apart from when it comes to his food he's got a wild side, but great with my son and protective over my family. It's in his blood to hunt so when he's out he's a born natural but also great in the house and very loveable dog." 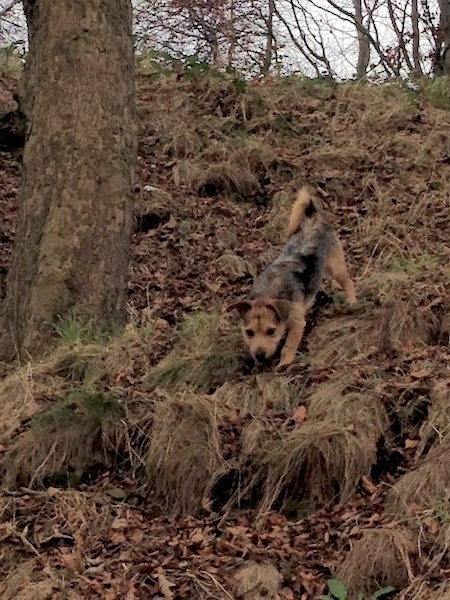 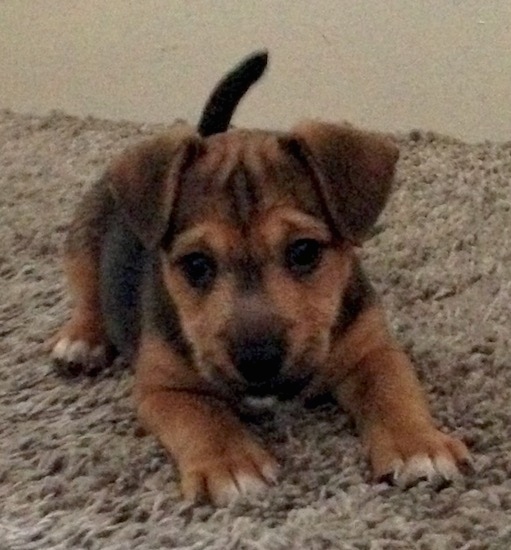 Nova the Patterjack Terrier as a small puppy 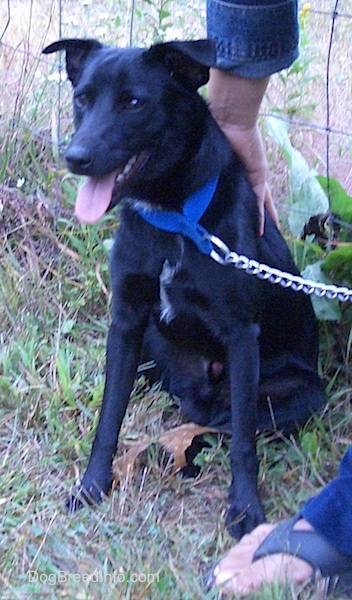 Peewee the Patterdale Terrier / Jack Russell Terrier cross—Peewee unfortunately became too much for his owners to handle and they had to give him up. He began to bite, became an obsessive barker and was a holy terror in the house. If you look up both breeds in this particular cross, you will see they are both strong-willed breeds that require a dominant, confident and consistent pack leader, along with a lot of daily mental and physical exercise. Peewee was being treated more like a human than a dog. Treating a dog like a human and not understanding the canine in your dog can cause serious behavioral issues in any dog. Another big issue was Peewee was not receiving the proper amount and type of exercise. He was not being taken for daily walks and was not told to heel on the leash. Peewee ruled the roost. It is important to choose the correct breed with the right energy level for your family’s lifestyle, and it is also important to understand a dog is a canine, not a human and treat him accordingly. You will find that any dog can be your worst nightmare, or your best investment; it all depends on the owner and their understanding of the canine and their willingness to give the dog what he truly needs. 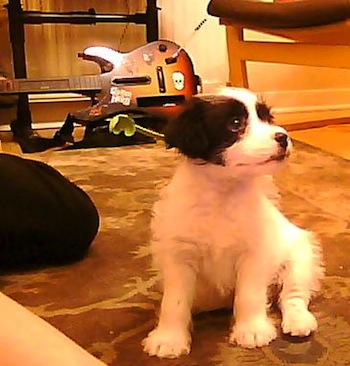 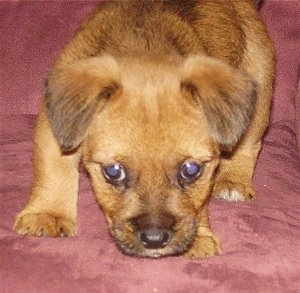 "This is my favorite little man Oska as a young puppy. He is a Patterdale Terrier / Jack Russell Terrier mix and is so cute with such a huge personality. He is now a year old and the one little bad habit he hasn't stopped is hiding the slippers around the house if we don't pick them up. He loves to supervise in the garden and make sure we are doing everything right, he even helps by digging the holes for us." 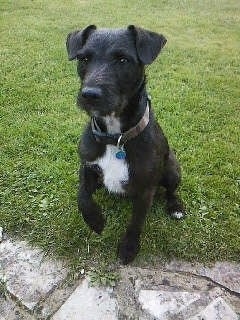 "This is Sky. She is a Jack Russell Terrier cross Patterdale Terrier. She is very lively and can jump very high for such a small dog. She is obsessed with tennis balls and will play fetch all day long. She is very loving and loves playing with other dogs. Her dad, the Patterdale is an ex-Crufts dog and her mother is a small white and tan family pet."

See more examples of the Patterjack