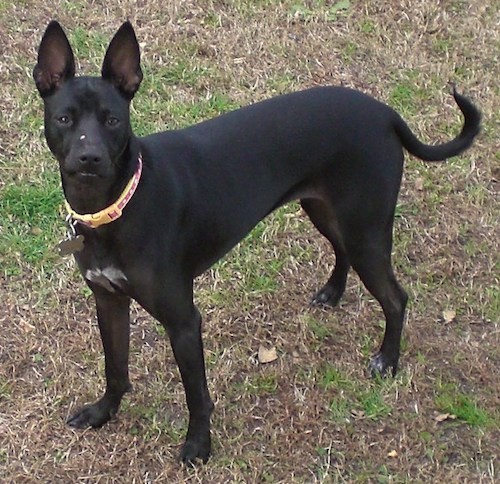 "This is Pepper the Pariah dog at 7 years old and 30 pounds. She never bit anyone. She was like therapy to everyone who knew her. She was very laid back but occasionally did sprints, (zoomies) when she was excited to see us or friendly faces."

A typical Pariah Dog anywhere in the world is of medium size, with pointed, erect ears, a wedge-shaped head with pointed muzzle, and a long, curved tail often held curled over the back. They usually have a short coat in countries with warm climates. The coat color varies from light tan to dark reddish-brown. Black and tan, piebald and spotted dogs are also common.

The term “Pariah Dog” was earlier used as a generic term for any stray or feral dogs, without any geographical restriction. Stray dogs are dogs with a more or less intensive human connection, mostly living around villages or towns scavenging on leftovers and trash, while feral dogs live in a fully wild state with no human connection at all. However, throughout the 20th century, cynologists have been using the term “Pariah” to describe a primitive natural breed of dogs that have the same physical appearance in all parts of the world in which they are found. The term “Pariah” comes from India where it originally designates a low caste "untouchable" human tribe in the state of Tamil Nadu. The term “Pariah Dog” is not to be confused with "mongrel" or "mutt," which mean a dog of mixed breed—although most mix-breed dogs in India are partly pariah. Pariah Dogs that have been selectively bred and officially recognized include the Canaan Dog of Israel and the Carolina Dog of the USA. Some scholars think that Pariahs may represent an evolutionary transition between the wolf and modern dog breeds. One important feature is that Dingoes and other canids of this group reproduce only once a year, as wolves do, as opposed to twice a year for pure breed domestic dogs. A major difference between the continental Pariah Dogs and Dingoes is that the former bark and Dingoes don't. The Australian Dingo Conservation Association's (ADCA) work shows that those who do invariably have dog markers in their DNA. The dogs mentioned by Rudyard Kipling in "Just so Stories" and "The Jungle Book" were most likely Indian Pariah Dogs. The Indian Pariah Dog is also called the INDog (Indian Native Dog) by some experts. Generally speaking, the Pariah, much like wolves and some other canids live in packs and scavenges in packs. In India, many INDogs are neighborhood or community dogs and few are actually feral in the strict sense. In villages and city slums, they are very often free-roaming pets of specific individuals or families, given food and usually even names. In urban and even some rural areas, they are facing increasing hybridization due to interbreeding with the western purebreds that are popular among the more affluent members of society. However, in the last few years they have started acquiring acceptance as pets of the affluent, largely due to adoption campaigns by animal shelters. They have an adaptable, friendly nature, high intelligence and trainability and overall good health, as they have evolved for survival. Their high territorial instinct makes them naturally good watchdogs. Some individuals tend to be more independent than others. They are extraordinarily loyal and devoted to their family. While the dog has usually survived as a scavenger, it has also been used for hunting by some tribes. Historically the dog is very interesting, as it is in evolutionary and anthropological terms.

If vaccinated, cared for properly and fed a well-balanced diet, they will rarely need to see a vet. They are not predisposed to develop any particular ailments.

Pariahs that are kept as pets will do well in an apartment if sufficiently exercised.

Like all dogs, Pariahs that are kept as pets need to be taken on a daily, long, brisk walk or jog. If possible, they will benefit from a large safe area where they can run free without risk of getting hit by a car.

A well-looked after pet Pariah may live to the age of 12 – 16 years. There is no research to determine the life expectancy of free-roaming dogs but it is probably considerably less, perhaps 4 – 6 years.

Needs little grooming. It is only necessary to remove dead and loose hair with a rubber brush. They should be bathed once every two weeks.

The Pariah Dog is probably a direct descendant of the early domesticated dogs, which, according to analyses of mitochondrial DNA, originated in eastern Asia. Today they are naturally found all over India, Pakistan, Bangladesh and even beyond South Asia. Pariah Dogs are considered the ancestors of the Dingo and the New Guinea Singing Dog. Others have been transported by humans to North Africa, the Balkan peninsula and the East Indies and even as far as South Africa, Japan, the Pacific Islands and possibly North America. According to Barry Oakman of the ADCA, the situation in Africa was similar to that in Australia, insofar as people (the Basuto) kept their dogs a bit in a loose association, with many turning feral. These Shenzi dogs were crossed with dogs brought by later settlers, giving rise among others to the Rhodesian Ridgeback. The Pariah Dog is threatened by human persecution, modification of the environment (urbanization) and hybridization with modern purebred dogs. The Dingo has remained genetically pure much longer due to its isolated situation, but now 75-80% of them show hybridization in their DNA. Historically the Pariah Dog is one of the most important dogs. In the colonial and post-colonial era, affluent Indians (like their counterparts in other third-world countries) have tended to value western purebreds and keep them as status-symbols, and to look down on indigenous dogs. This has led to the Indian Pariah Dog/INDog being treated as an inferior animal instead of as an ancient, natural and valuable breed.

How this dog plays statistical games is interesting. For example, in Mumbai where 65 % of the population lives in hutments or slums, they are considered homeless. In India urban infrastructure is very weak and because of this people throw garbage onto the street and in large garbage dumps. This activity helps the dog to flourish in its scavenging niche. Some of these dogs may be taken in as "quasi–pets" which escape the statistician's eye and the anthropologist's observations.

Besides the club, almost all animal welfare organizations in India also encourage adoption of these dogs. By adopting a Pariah from an animal shelter or the street, dog lovers can better an animal's life and also help ease the dog overpopulation crisis. Pariahs/INDogs make wonderful family members.

All Pariah Dogs in the broad sense of the term from SE Asia, the Pacific Islands and Australia, have been found to have more resemblance to each other than to modern domestic dogs, and have been classified in the subspecies Canis lupus dingo.

Not officially recognized in India, however there is an unofficial club called the "Indian Pariah Dog Club" made up of individuals who care, and want to help these dogs. 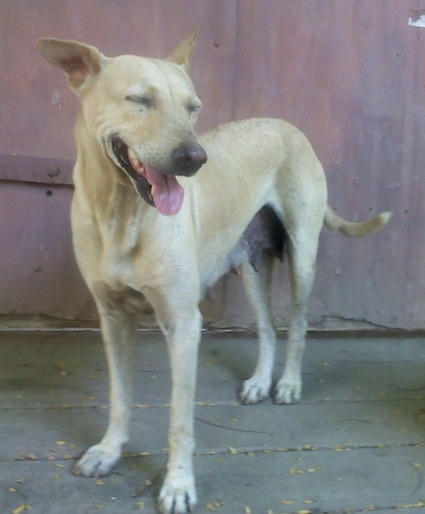 Rick the Indian Pariah dog at 8 years old—"My dog Rick is 20 inches (50.8 cm.) tall and weighs 44 pounds (20kg.). She is gentle, kind and has never bitten anyone. She even had a pup named lucky, but she died due to pregnancy problems. She eats only meat, milk, eggs, sweets and kibble. She likes long walks, chasing cars and taking a long nap after a walk. She never had any training because me and my friends adopted her when she was 6 years old. She only comes upon called and goes when asked to. She hates baths, but not in the summer. She never even bites another dog unless pushed to the limit. She is scared of fire crackers and our municipal corporation. Before we adopted her, she was caught by dog catchers and was released almost 124 miles (200 kms) away from our city, but she returned." 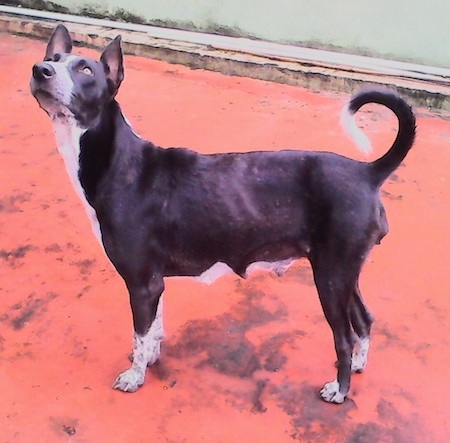 Lucky the Indian Pariah Dog at 1 year old—"Lucky was Rick's last daughter. She died due to pregnancy problems. Her character is much like her mother. She too likes walks, playing with other dogs, eating kibble and drinking milk. She is a bit shy towards humans but very aggressive towards other dogs. She is a proficient tracker, hunter and caught many cats during her short life. She likes to sleep in the afternoon and loves chewing bones. She barked at people but never bit anyone. REST IN PEACE LUCKY." 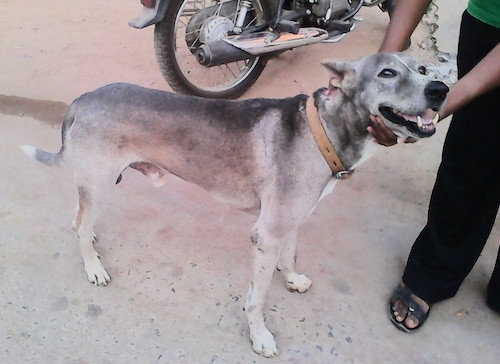 "Wolfy is a 7 year old Indian Pariah with a unique grey and black coat. He is shy but loving and a good guard dog. He likes eating anything except dog food. He likes to play with another dog named Raju. He takes mud baths when it is hot. He has tall legs and a long body. He has twenty nails and lives in an apartment." 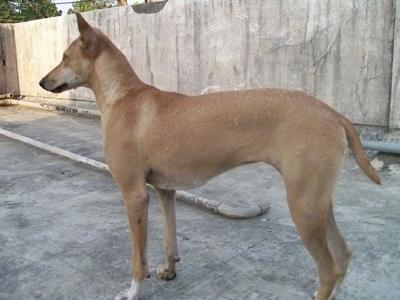 "Chinky is a one-year-old female and has the most typical INDog colouring. She lives in Mumbai and is up for adoption. She is being looked after at present by Dr. Manik Godbole. She is extremely friendly, gentle and intelligent.” 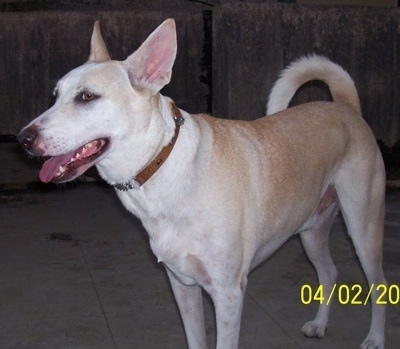 "Tommy is five years old, owned by Dr Manik Godbole of Mumbai. When he was a pup he was badly bitten by adult dogs in the area. Luckily Dr. Godbole found him and started treating him. She adopted him when he was about three months old. Tommy is extremely independent and intelligent but also very affectionate." 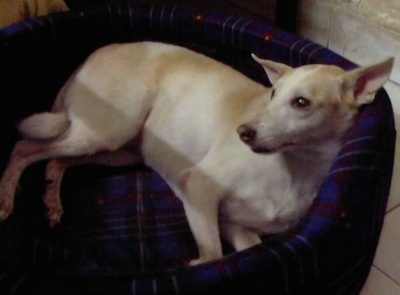 "Pixie is nearly four years old, and was adopted from the nonprofit organization The Welfare of Stray Dogs (Mumbai) during an adoption event in 2004. She was extremely shy as a puppy, but her owners Ajay Iyer and his family were very patient and she soon became friendly, fun-loving and sociable." 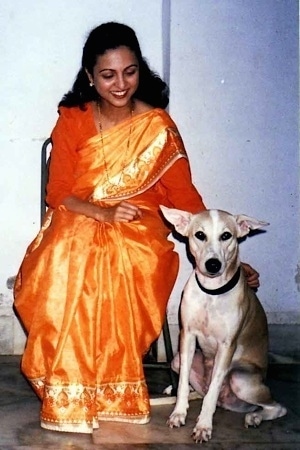 "Sally is owned by Mrs. Shirley Amanna. She lives in Mumbai and will be seven years old in January. As a pup she had been locked on a terrace without food or water. Fortunately she was rescued by Shirley within a few days and has lived a very happy life ever since." 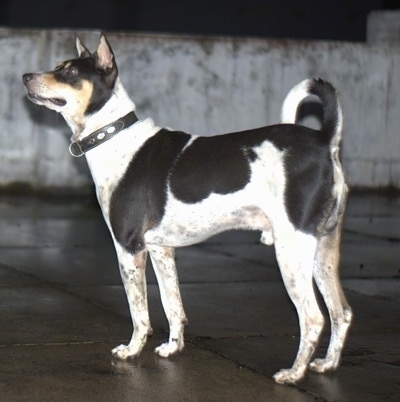 "Robin is a five-year-old male owned by Aditya Panda of Bhubaneshwar, Orissa. He was born in a drain along with three siblings. Aditya adopted him when he was not yet six weeks old. Initially he was very scared of humans, but he soon completely overcame his fear to become a perfect and devoted pet." 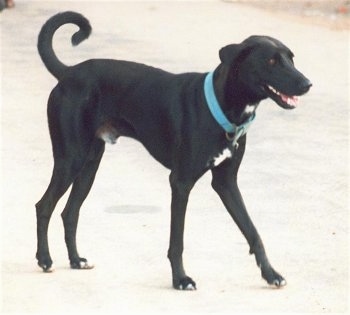 This is a photo of a black Pariah Dog that was taken at Mandapam town in Tamil Nadu, India. It is apparent from the dog’s collar that this Pariah Dog has had contact with humans. His shape and size are typical of the Pariahs, but not the color. Black dogs are outnumbered by brown and brown-white dogs by about 20 to1. However, in areas where leopards are present there is known to be a high prevalence of black-colored dogs because they are less prone to leopard attacks. 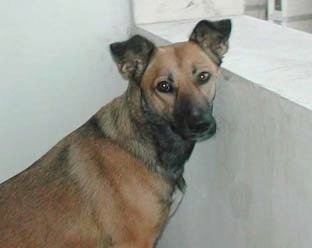 This photo of Pariah desert dog named Patchi was taken while she was still in Kuwait a few years ago. She is typical of the breed-type relating to this feral type and is now living in the U.K.