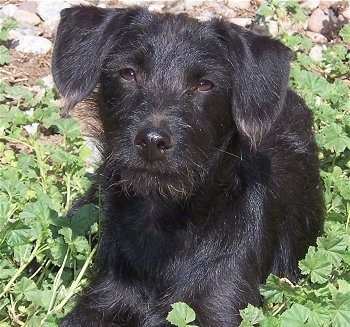 The Pinny-Poo is not a purebred dog. It is a cross between the Miniature Pinscher and the Poodle. The best way to determine the temperament of a mixed breed is to look up all breeds in the cross and know you can get any combination of any of the characteristics found in either breed. Not all of these designer hybrid dogs being bred are 50% purebred to 50% purebred. It is very common for breeders to breed multi-generation crosses. 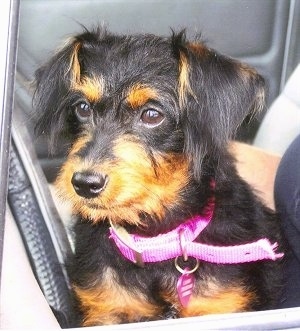 Candi the Pinny-Poo at 6 months old—"Candi's mom is a Mini Pinscher and her dad is a Toy Poodle." 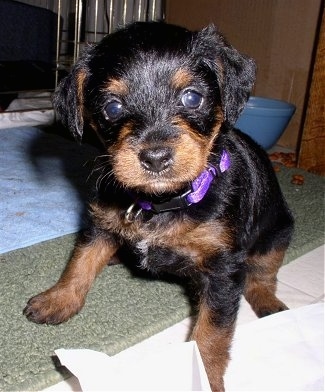 Candi the Pinny-Poo puppy at about 6 weeks old 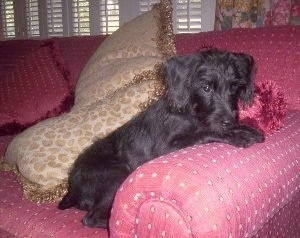 Tank the Pinny-Poo puppy at 3 months old (Min-Pin / Poodle mix)—"Tank's mother is a Min Pin, and his father is a silver Toy Poodle." 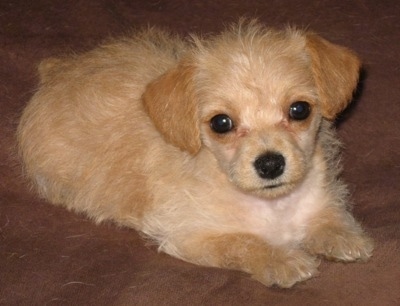 "Daisy is a Pinny-Poo and she is 7 weeks in this photo, weighing 1 pound and 13 oz. Her mom is a Min Pin, weighing 10 pounds and her dad is a Toy Poodle weighing 8 pounds. I run a daycare so she is kennel trained for her safety. However, I do have 2 small children and an 85-pound Boxer and everyone gets along great. She is really small so she wears a bright colored vest with bells attached to help us locate her better. We have started training her to avoid the "small dog syndrome". She is learning to walk with a harness and she is sleeping better at night with lots of daily exercise. I've quickly become the pack leader in our home and she has learned that quickly as I correct her with a tap on the nose when she is disobeying. She has lots of puppy toys her size, yet she prefers the big dog toys the Boxer plays with (and vice versa)." 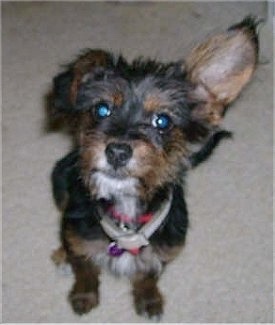