Tia the Elkhound Out on a Pack Walk 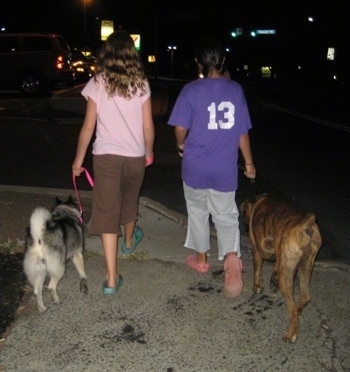 Tia has been with her new family for one week. Even though it was written up in her paperwork that she needs work on housebreaking, the family reports Tia has had no accidents in the house. She also no longer tries her darnedest to bolt out any open door. The first day Tia was brought home she had backed out of her collar and she bolted. It was very hard to catch her; the more you would walk toward her, the more she would run away from you. One week later, if she does get out because someone has left the door wide open, she does not bolt. If she is out and someone is trying to get her back in, they will call her name. She will either lie down and allow the person to take a hold of her collar or she will lower her head and walk up to the person. Both actions are submissive behaviors.

Tia also no longer runs around like a spaz. The first day we saw her at the pound she was very hyperactive—darting from toy to toy, person to person, spinning in circles and obsessively biting her own tail. She was attacking herself out of frustration. The family now reports that Tia is calm inside the house. She will follow the humans, lying down next to their feet or she on her own will retreat to her open crate to lie down. She also does not beg for food. When the family is eating she lies down.

Soon after she had left the pound her owner did see her start to spin, however it had looked more out of habit than obsession. She was not biting herself this time. Tia was told, "No" and she had immediately stopped. Allowing a dog to engage in obsessive behaviors does not make a happy, mentally stable dog. First the root of the problem needs to be found and corrected. In Tia's case it was a lack of mental and physical exercise. Then any time the behavior is done out of habit it must be corrected.

A lot of this behavior success is a direct result of Tia's pack walks. In the past she was not receiving enough exercise. She had energy stored up inside her and ready to burst. The first thing we had done with her before taking her to her new home was to walk her. We walked her a lot—from the afternoon all the way until it got dark with various breaks in between as we stopped at stores inside the town. We had created a migration scenario for her. For Tia it was a new pack migrating to a new area. From rags to riches, Tia migrated right from the pound into a loving home.

Tia is walked and/or jogged every day at least twice a day. Two times a week she goes on an hour and a half pack walk with Bruno the Boxer. The entire family, including the kids, make sure they enter and exit all doorways first. They make sure she is calm before they snap on her leash and they make sure THEY are leading HER, rather than HER leading THEM. These pack walks not only release physical energy, but mental energy, something else Tia had built up inside her. 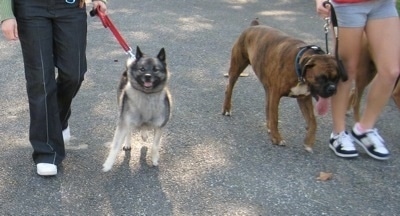 Notice how she is not relaxed. She's tense. A tense walk like that would be enough to give me a headache. 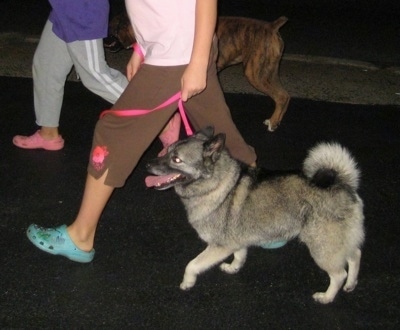 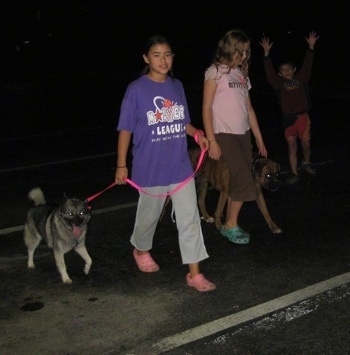 A few times Tia had decided to bark at people, other dogs or strange objects on the walks, but was immediately corrected with a "No!" and a short, quick tug. She used to react to other dogs by barking, but was corrected each and every time. I am happy to report it only took one correction to get her to stop barking at a Beagle who was at the table next to us when we had stopped at the water ice store. After being told "No," Tia had sat down next to me with an eager-to-please look on her face. She had gone from holding herself very proud with ears erect, barking at the dog to sitting down right next to my leg, ears back, no longer paying any mind to the other dog. That called for a body massage, good girl Tia! She loved-up the affection, and it was as if the other dog no longer existed. Later the same night we walked right by a dog inside a car. Tia smelled the dog. You could see her nose sniffing the air. This was something Tia would have reacted to if it were the first couple of days after she left the pound. However, this time she kept on walking. We later passed another dog. No reaction from Tia. Progress... 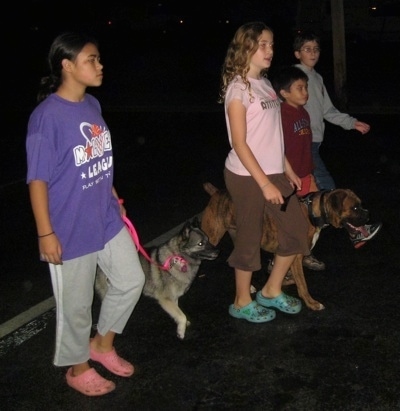 Tia also had a habit of bolting toward people when they came close to her. She was not bolting toward them in a mean way. She bolted because she had wanted to smell them. However bolting while on a lead was not acceptable. Tia was met with body blocks and a hand held out in front of her like a stop sign. "NO!" Tia quickly realized she was not allowed to yank toward the person. She stopped trying and sat down. 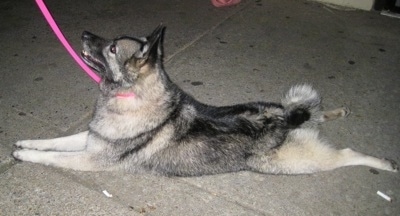 After the walk Tia stretches out on the cool cement. Don't anyone let Bruno the Boxer see those cigarette butts!

We are still working on some of Tia's manners while out on a walk, but overall she is a very good walker. It's only been a week and look at just how many changes have taken place. She is like a totally new dog.