Amazing what a little leadership can do to a dog's behavior! 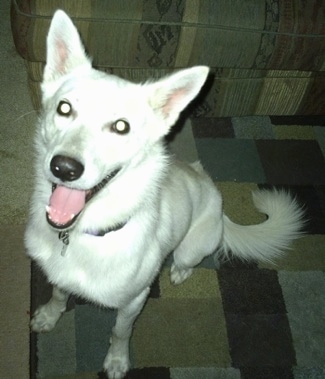 "He happily follows. It’s amazing his change of behavior from what I was told he was to act like, to what he actually acts like. It’s an eye-opener for me."

I just wanted to say thank you. I watch Cesar's show (Dog Whisperer) all the time but was looking for similarly minded training/reading material, mostly for me. We had picked up Max, a White German Shepard from the pound. My boyfriend and I both fell in love with him. I'll admit I was looking at another dog, however, he was just a puppy. I've had a puppy previously and having not been able, or willing, to set boundaries I spoiled him rotten. Thankfully I found a good home with somebody who understood that I was not a good owner, I didn't train him at all, and I wasn't respected by him. I decided I would train myself before I got another dog. (I grew up with dogs and thankfully my dad was a strong pack leader ;) )

When we first got Max he jumped, held people with his mouth, and bolted out of doors. Max owned the pound, and every room in there. It can safely be assumed that Max also owned his prior owners and their home and that is how he had ended up in the pound.

When I first got to the pound I was not calm, I was emotionally everywhere, and I only caught myself a few times. We went through the adoption process and made it final. Before taking him home, I took a minute to relax and it showed in Max's behavior immediately. I also set boundary/limitations at the pound. I didn't let him go through the door first, for example. Wanted to let him know from minute one just who was going to be running the show.

We had our cats in the car and he accepted the cats as above him right away, and because we were showing him leadership he respected our house as being a loan to him and not HIS to run. We took him for a walk and only two hours after we got him, he had accepted that he stays on the lead and on my left side, with his neck parallel with my body. He's not allowed further ahead than that. He stays on my boyfriend's right side, same deal. He learned this, accepted it, and happily stays there. Max has been going on 2-3 pack walks a day, plus bathroom walks.

Basically because of your site, he respects, and he's starting to trust both me and my boyfriend. This is just plain awesome. He's very happy being a dog that doesn't have to be in charge and responsible for his pack. He was very anxious/excited/nervous when we got him, now he's already calm and mellow and just waiting for us to say when he can do something. It had only been a couple of days and he very rarely ran out of the house without permission, and when he did, he immediately came back when called. 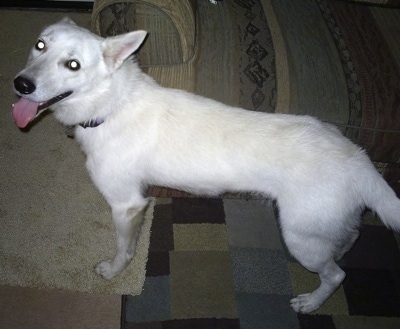 The funny thing is one of the things I didn't want was a non-housetrained puppy, instead I got a 3.5-year-old non-trained dog, go figure. However, from day one I got him to respect my space and to wait to go outside. The day we got him we had to work on him waiting before going out the door regardless of what was going on, or to alert us. I kept an eye on him so I had an idea of when to correct him, or to go outside saying “potty” and praising him when he went. After the first day he had already learned he would get a reward after going potty outside. He thankfully didn't go potty inside on the first night, but almost peed on the kitchen floor in the morning. I took him outside and he peed. He came running for his praise before I had a chance to say "good dog." He was learning that going to the bathroom outside was good, and inside he got corrected then brought outside.

I'm also being a space Nazi; he's not allowed in my space unless I invite him, same with going in/out of doors, cars, etc. He stays there until I go somewhere, keeping an eye to make sure his leaders don't leave. How do I know we’re leaders? First, he's submissive, he checks where we are, and he asks for permission to go outside if we leave. He also can accept that he must stay in one spot (didn't really know stay quite yet when we first got him, but was picking up on it very quickly) I can leave, go, and be gone. He knows he can't leave, he must have one of us guide him somewhere. He happily follows. It’s amazing his change of behavior from what I was told he was to act like to what he actually acts like. It’s an eye-opener for me.

One of our biggest concerns was his tendency to biting/holding onto human arms. We were afraid to allow him to play with kids because of that. That is something we started working on since day one. He would do this when someone in front of him got excited. So what I did was to hold my arm in front of me, and run/hop/skip side to side, or backwards and correct him as soon as he started to go for my arm. He stopped going for my arm when he realized it was something he was not allowed to do.

We are also somewhat pack leaders to two cats. One is Pouncer, a male and the other is Sissy, his sister. Both of them respect our authority; although they don't always listen, they know their rules, rooms they are not allowed in, etc. Our kitties have their own bedroom. Max is not allowed in that room. When Max first came to live with us, twice in a row he wanted to go in there, the first time he got in there, and was spotted and corrected. The second time he went to the threshold, looked back and waited. The kitties’ room is a boundary that we have set for him and he has learned to respect it. 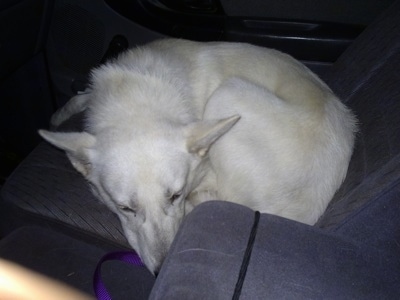 The first night Max slept on the couch against our wishes so we corrected this and communicated that he was not allowed on the couch. The second night he used his dog bed! Yay!! :)

One thing is for sure, for being “untrained” he sure is behaved! All we had to do was show him direction and what we wanted him to do and not do in a way that he could understand. I must say after having been speaking dog for a while he isn't scared, or nervous of things as I was told he was. Sure, he was unsure at the pound but not scared, just unsure, wanting for, and begging for direction and leadership. At the dog park he will check out every other dog, and then every human. He also greets those who come in, dog(s) first, then the people, then back to wandering around. He will play around a little bit, but not too much. Max sees the dog park as a social event, and enjoys meeting all of the other dogs and people by smelling them. Dogs can tell a lot about something by its smell. It's a good source of communication for a dog. We like the dog park as not only a social event but a training area. I call him when he is his most distracted, 9 out of10 times he comes over immediately, the other time, I have to try a bit harder to get his attention, but not very hard.

I like knowing how he thinks, what he's thinking, etc. It allows me to communicate to him  what I wish of him, and he's very happy to do so, very much a people-pleaser. He seems to recently have attached more to me lately than my boyfriend whom he immediately befriended at the pound. It was when I relaxed and calmed myself into a leader that he started noticing me.

I'm getting the hang of this dog communication, and I think Max is happier now, especially because he understands what our corrections are for. It's easier for him to know why he's in trouble than to just be in trouble with no idea what he may or may not have done.

To sum it up, thank you for correcting my behavior by allowing the resources to be here, and ranked of the first three on Google. I don't remember where it was, but it helped. I'm tired of reading what I know now is incorrect, or the hard way to train a dog. He listens very well, and is actually very happy, and I also know he is getting the balance he needs. :)

Max DID PLAY! FINALLY! I think he just needed another dog that was balanced that he liked. He tries to dominate unruly/pack-leading dogs and I need to correct him when he does this. One thing I noticed today is Max refuses to respond to anybody if they are tense, nervous, or anxious. Including myself. He will come to anybody who is calm and calls him, provided he's paying attention. He always pays attention to me and my boyfriend provided we are calm. He refused to respond when I was a little anxious/tense, this helped me correct my own behavior, and then he came like nothing had happened. This is just more proof of the concept of how dogs respond to people/animals.

Max has learned “shake” and “down.” He's more partial to hand signals. Snap twist index finger from up to down is “sit.” Flat hand moved down, then pulled back up while not flat, is “down” (lie down).