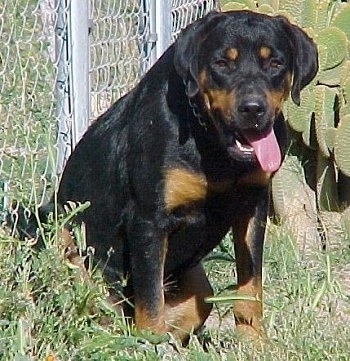 The Roman Rottweiler is generally the same as a standard Rottweiler, only more mastiff-like/flock guardian-type in appearance and temperament. It has a large to very large noble, impressive, heavy, robust, massive, powerful body. The head is broad, heavy and strong with some wrinkling. The skull is broad and large, with a broad back skull. The stop is deep and well defined. The muzzle is broad, full and square. Lips are well-developed, thick, with moderate to large flews, and pendulous lower lips. Teeth should form a scissor bite. Eyes are almond shaped, deep set, expressive, well apart and dark. Ears are pendant, triangular, carried forward and set well apart. Ear leather is thick and fur is soft. The nose is wide and black, unless a color other than the base color of black, then the nose color is the base color, like red coat, red nose or blue coat, blue nose. Mouth is dark in color. 42 teeth. Teeth are large and strong. The neck is powerful, well-muscled, moderately arched, with a dewlap. The chest is broad and deep, having a well-pronounced fore-chest with well-sprung oval ribs. Hindquarters are powerful and muscular. Front feet are compact and well arched. The tail may be docked leaving one or two vertebrae or left natural; if left natural it is curled over the back when excited or moving. Dewclaws may be cut; back dewclaws/double dewclaws are common at birth. Coat is thick and ranges from smooth to plush; it may be long but is not desired. A thick, plush coat is desired for a Rottie working as a flock guardian. The coat color is black/tan, black/rust, black/dark rust, black/mahogany and can also come in red/tan, blue/tan or black; other colors are accepted in the Roman Rottweiler but not desirable. Gait: the Rottie is a trotter with a strong forereach and powerful rear drive. It effortlessly covers the ground.

The very first Rottweilers came in a variety of colors of brindle, gray, yellow and black, yellow and tan, and of course what we still see today, very rarely the red and tan; black and tan Rottweilers were the rarest colors of them all. The yellow and tan dogs were the most common. White markings on the face, chest and feet were seen; today’s Rottweiler will often whelp litters with white markings that usually fade with time, although some do keep the white. In the first Rottweiler, standard brindle was an acceptable color.

What is a Roman Rottweiler and what’s the difference between it and the standard Rottweiler? The Roman Rottweiler is a re-creation of the original Rottweiler, a mastiff-like Rottweiler who crossed the Alps herding and guarding cattle as well as fighting in wars with the Romans. It is a larger dog than the standard Rottweiler, which is shorter. The Roman Rottweiler is to the Tibetan Mastiff as the standard Rottweiler is to the Australian Shepherd. Calm, confident, trainable, athletic, courageous, protective, reliable and devoted, it has a reliable temperament. Firm and careful training is essential for this breed, otherwise you may end up with a very powerful and overly aggressive dog. Yet it can, with proper handling, also be a loyal, loving and very rewarding companion. These dogs require owners who can handle their massive size. The Rottie is a natural guard dog with a mellow temperament. It is highly intelligent and has proven its worth beyond question in police, military and customs work over many centuries. Because of its size, training should begin fairly young—while the dog is still small. This breed needs a lot of leadership, companionship and socialization to be truly happy. The objective in training this dog is to achieve pack leader status. It is a natural instinct for a dog to have an order in its pack. When we humans live with dogs, we become their pack. The entire pack cooperates under a single leader. Lines are clearly defined. You and all other humans MUST be higher up in the order than the dog. That is the only way your relationship can be a success. When the Rottweiler receives consistent leadership and is trained, it will be a good playmate for children. It will accept cats, other dogs and other household pets as long as the dog has been socialized well and have owners who assert their authority over the dog. Friends and relatives of the family are normally enthusiastically welcomed. Strangers from whom the dog senses bad intentions can get no further than the sidewalk. The breed does well in competitive obedience, Schutzhund and tracking.

This breed is susceptible to ACL damage. Prone to hip dysplasia. Tends to snore and overeat. Also prone to entropion (narrowing of the slit between the eyelids).

The Roman Rottweiler will do okay in an apartment if it is sufficiently exercised. These dogs are relatively inactive indoors and a small yard will be sufficient.

The Roman Rottweiler needs plenty of exercise. You can't give these robust dogs too much work or exercise; they thrive on it. They need to be taken on a daily walk or jog. Running in the woods and in open country makes them very happy and they have no desire to wander from you. Swimming or running beside a bicycle are perfect activities for these dogs and they also love retrieving a ball.

The smooth, glossy coat is easy to groom. Brush with a firm bristle brush and bathe only when necessary. Plush coats are also easy to take care of and use a slicker brush; long coats need a bit more attention depending on coat length and thickness. This breed is an average shedder.

The Roman Rottweiler is in a sense an oversized Rottweiler, which is truer to the original dogs that existed hundreds of years ago. There are a handful of breeders who breed this type of Rottweiler. One breeder, by the name of Emily Tiscarenio from Colossal Rottweilers, was successful in getting the type recognized with the Academic Kennel Records under the name Roman Rottweiler. This re-creation of the original Rottweiler is a descent from the Tibetan Mastiff and possibly Italian mastiff. These ancient Roman ancestors were inbreeding with local shepherd dogs and fighting dogs. The first time they appeared in writing was 74 A.D. The Romans used this mountain dog during the Middle Ages to herd and protect cattle for Roman soldiers crossing the Alps. It had to be big enough to protect and move the cattle that fed the Roman legions and strong and rugged enough physically and mentally in the harsh mountain terrain. It had to be intelligent, willing to work, and have a strong guarding instinct. These dogs were brought to Europe with the Roman invaders’ legions. Their closest relatives are the Greater Swiss Mountain Dog and the Bernese Mountain Dog, and it is quite possible that the Boxer is related. When the Romans left their cattle with the escort dogs (Rottweilers) settled in Germany due to impassable roads and marshlands, this is when the Germans got a hold to a few specimens of the breed. These areas became Roman territory. One territory was Rottweil, built in 74 A.D. When in Rottweil they had to herd the cattle, guard the cattle, keep order in the herd, tame the bulls, get the mean vicious bulls to move, and guard his master and his master’s property including his money bag which he tied around his Rottweiler’s neck, these were no easy tasks. After the Germans acquired the Rottweiler they began to breed it down in size and so was the end of the Roman Rottweiler. Even back then there was great controversy between the small Rottweiler and the big Rottweiler so much as to have fist fights over the matter. The Germans wanted a shorter Rottweiler to better its herding ability. When moving a bull the dog bit the legs until the bull moved. They wanted it shorter so the bites did not destroy the meat quality higher up in the legs. Shorter dogs bit lower on the legs. When taming a bull, the bull had a harder time attacking and injuring the smaller dog so they purposely selected runty dogs in their breeding program. There were others who wanted to preserve the original Rottweiler and this large dog’s powerfulness, guarding abilities, transportation and big-game hunting abilities. 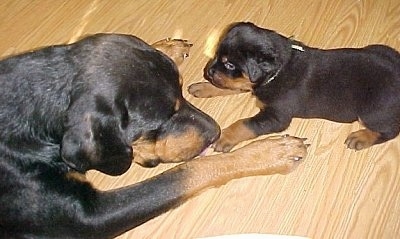 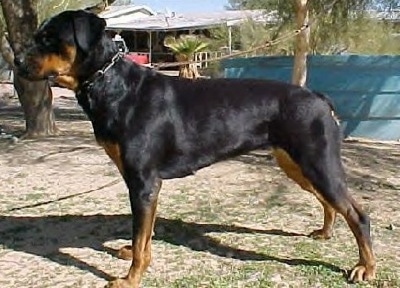 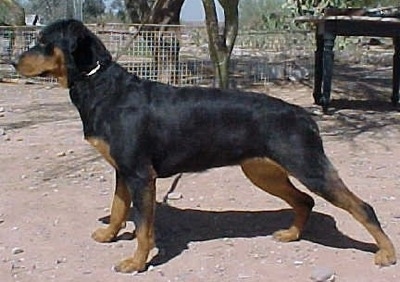 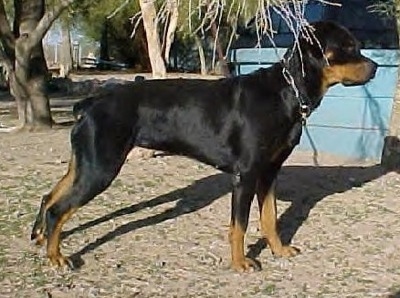 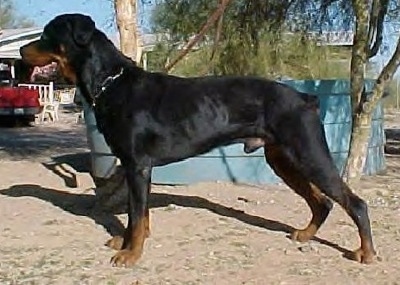 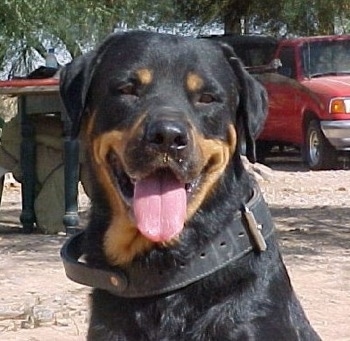 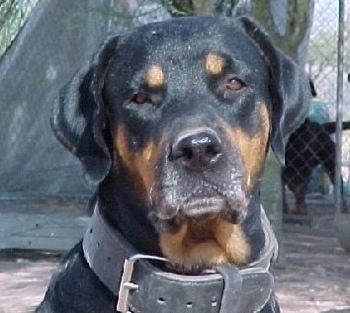 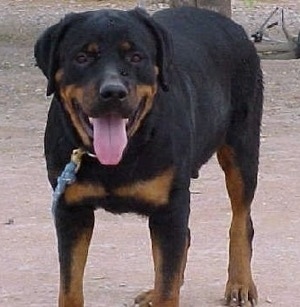 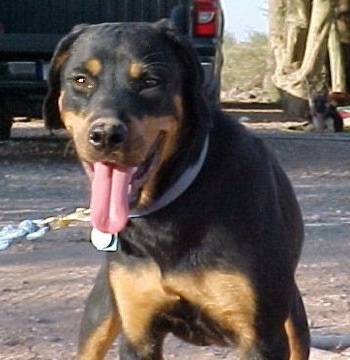 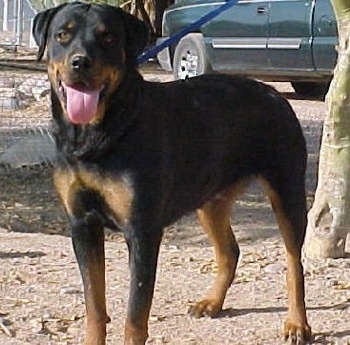 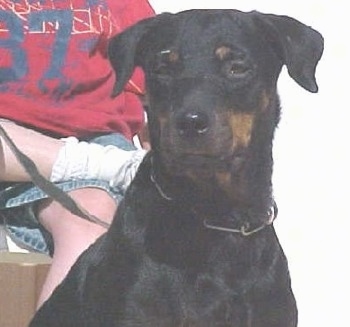 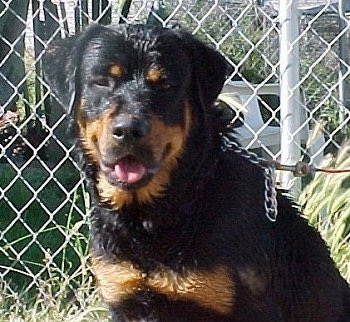 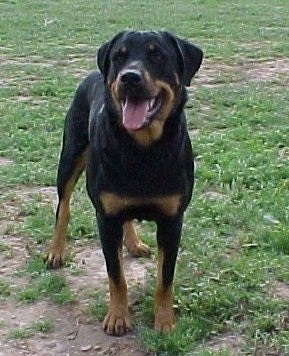 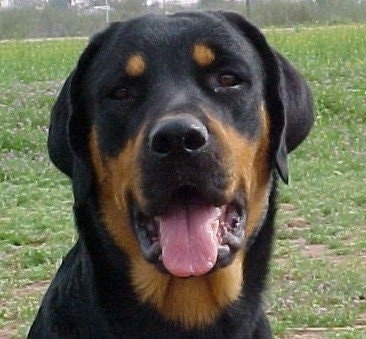 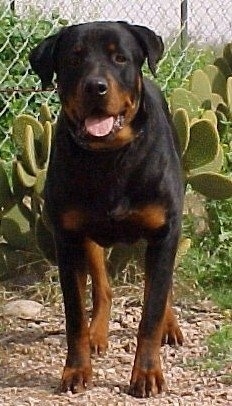 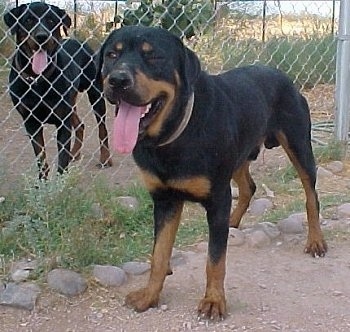 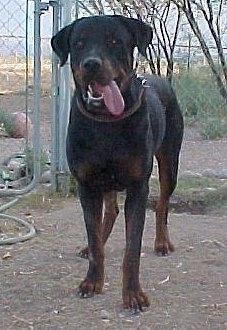