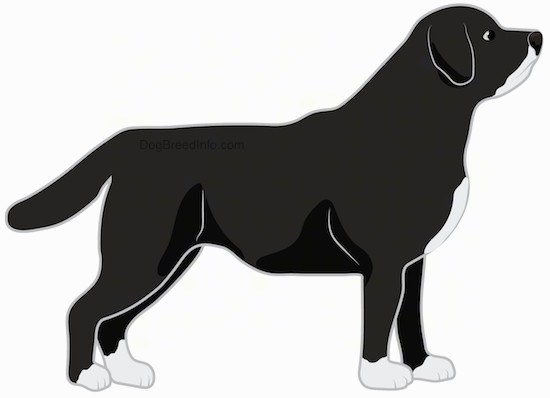 The St John’s Water Dog is most similar to the modern day English Labrador and also quite similar to the American Labrador. They have thick bones and are strongly built with muscled chests. This breed is known for their black coats with white markings on their chests, feet, chin, and snout (also known as the tuxedo markings). These dogs loved to swim and had short coats that were also think in order to protect themselves from the cold water. Their tails were medium to long in length and were thick with soft fur. Their snouts were long and became thinner towards the nose. They had thinner legs compared to their barrel like chest and were known to look lanky at times because of their long bodies.

The St John's Water Dog was very loyal to its owner. They were friendly, happy dogs and willing to do any task. They were eager to please, always waiting for a command and following their owners.

There are no records of health issues.

These dogs were bred for the water and loved to be outdoors. They probably needed a bigger living space as they were large dogs and would not have done too well in an apartment sized home.

A space to run around and explore would have been ideal, if not then a long walk would suffice. They preferred to live where there was water to swim.

They had short, thick coats that probably only needed to be brushed or bathed when necessary.

There are no early documents of the St John’s Water Dog. All we know is that this breed was bred around the 15th century when explorers were still colonizing new lands. John Cabot, an Italian explorer, discovered the Newfoundland island in 1497 where it is rumored the St John’s Water Dog was first found. Not long after, fisherman from Spain, England, and France also came to Newfoundland, possibly with their own dogs.

As you can probably guess, the St John’s Water Dog is said to have been bred in Newfoundland with help of the dogs that the fisherman brought to the island. These dogs may have included the French St. Hubert's Hound, Portuguese Water Dogs, and pointer breeds from Europe. It is said that throughout this time, many dogs were brought over from trade boats, giving the people of Newfoundland many traits to be able to cultivate their the dog that they wanted. While this theory is the most popular, there is no direct proof that this is completely accurate.

The fishing industry at the time was not nearly as efficient as it is today, leading in large fish to commonly escape from the boat before the hook was out of them. This problem brought in the need for waterdogs. In order to catch these large fish, fisherman would put a specifically made harness on the dog and slowly lower the dog into the water, hoping to catch a fish. These dogs loved the water and their job and were also used on the shores to help catch fish. With the human holding one end of the large net, the dogs job was to bring the other end of the net back to shore after it being spread out in the ocean for a while. The dog would swim out to the long end of the net, hold the rope in its mouth and swim to shore while the whole of the net was billowed against the current, fish caught beneath.

The St John’s Water Dog was very popular from the 1600’s up until the late 1700’s, especially for those who lived near the fishing docks. However, in 1780, the Newfoundland Commodore-Governor declared a law that stated that there may only be one dog per household. This law was created in order to save the sheep population from plummeting. The idea was that with less dogs, there would be less predators to hunt the wild sheep. This act was called the Newfoundland Sheep Act. In actuality, it is said that this law was created for political reasons because of the positive change of hospitality between the fisherman coming over from England and the sheep farmers in Newfoundland. Because of this act, the St John's Water Dog was starting to decline in population.

After the Newfoundland Sheep Act of 1780, more and more laws were put into place that further diminished the St John's Water Dog from breeding. During this time, there was also a higher tax on female dogs which often meant that female puppies were killed on the spot because they were not worth much. The last act within this long series of limiting laws was the British Quarantine Act of 1895. Since Britain did not have rabies in their country, they were worried that the disease would travel to their land through trade. To prevent this, the British Quarantine Act made sure to only accept dogs that were licensed and put into quarantine for 6 months after arriving to England. As you can see, this made it extremely difficult to keep the St John's Water Dog alive as a breed. Since the St John's Water Dogs that were previously in England were all used to start creating new breeds, few to none of them were left pure. Many years later, the St John's Water Dog was said to be found within a few tiny fishing towns within Newfoundland. 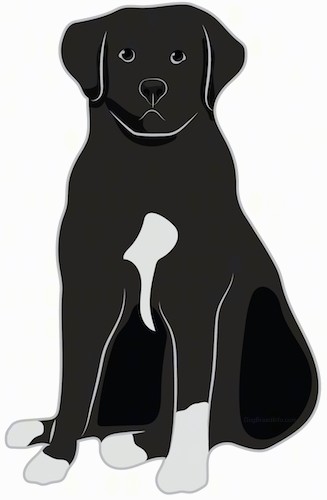