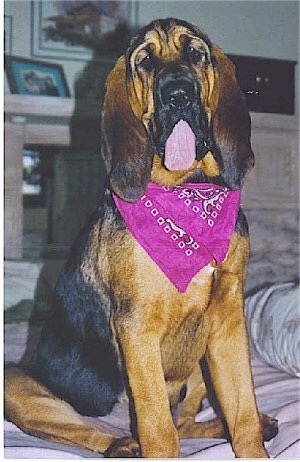 The Bloodhound is a very powerful, massive hound dog. The back is very strong for the dog's size. The head is long and narrow in proportion to the dog's length, and long in proportion to the body. The muzzle is long and the nose is black. The deeply sunk eyes are diamond in shape due to the lower lids being dragged down and turned outward by the heavy upper lids. Color varies from a deep hazel to yellow. The thin, soft, drooping ears are set very low and extremely long. The Bloodhound has a lot of extra, wrinkled skin hanging excessively loose, even more so around the head and neck where it hangs in deep folds. The dewlap is very pronounced. The muscular, front legs are straight. The tail is carried high with a slight curve above the topline of the back. The folds of the skin aid the dog in holding in scent particles while tracking. The coat is wrinkled, short and fairly hard in texture, with softer hair on the ears and skull. Colors include black & tan, liver & tan, red & tawny and red. Sometimes there is a small amount of white on the chest, feet and tip of the stern.

The Bloodhound is a kind, patient, noble, mild-mannered and lovable dog. Gentle, affectionate and excellent with children, this is truly a good natured companion. These dogs are so good-natured that they will lie there and meekly let children clamber all over them. This breed loves all the attention they receive from them. To be fair to your Bloodhound, make sure your children do not pester or hurt the dog, because Bloodhounds will sit there and take it. Very energetic outdoors and boisterous when young, determined and independent, Bloodhounds need firm, but not heavy handed training. An owner who displays anything but a natural, calm but stern authority will bring out a streak of willfulness. The new owner of a Bloodhound will need to have plenty of patience and possess great tact for consistent leadership for training to succeed. Clear rules need to be set and followed. If you show signs of being a meek owner, this dog will not listen to you. Do not expect too much by way of obedience from this dog. They are naturally gentle animals but they are not easy to obedience train. If they catch a scent of something it can be hard to redirect their attention back to you if you are out of physical range of them. Males go through puberty between the age of 1 and 2 years. They can be quite a handful at that time and one really needs to make sure they are being a firm pack leader, but after age 2, with the proper leadership, training, stimulation and consistency, they will mellow out a bit. Socialize well to prevent them from becoming timid. It is very important that this dog is taken for a daily pack walk. Bloodhounds that are lacking in mental and/or physical exercise will be hard to handle. A Bloodhound becomes devoted to its master and gets along well with people. This dog loves everyone and some will greet wanted and unwanted visitors happily. Others do not welcome unwanted guests. They can be protective of their domain if no one is home, but out on a trail, they will welcome anyone. Some will bark and let you know when strangers are around. They can live in harmony with other dogs and household pets. Bloodhounds are droolers and have a tendency to snore and howl. Their noses are so superb that it is hard for them to not wander off after an interesting scent. They may also sniff humans in places that are considered inappropriate. While humans see this as rude, the dog is actually learning a lot about them. Bloodhounds are able to follow any scent, even human—a rare ability in a dog. This breed has been said to successfully follow trails over 100 hours old. He is so determined that he has been known to stay with the trail for over 100 miles. The Bloodhound is such a sure tracker that the breed is used worldwide for rescue and criminal searches. The Bloodhound's evidence is admissible in the court of law. One Bloodhound brought about 600 criminal arrests and convictions. Bloodhounds can never be kept in an unfenced yard. There is a good chance instinct will lead them to wander off if they are off leash. They flee when they get on a scent; instinct drives them to find the end of the trail.

This breed is prone to bloat. You should feed two or three small meals a day instead of one large one. Avoid exercise after meals. Some suffer from stomach cramps. Prone to hip dysplasia, cherry eye, ear infections and entropion, where the eyelids turn inward. A padded bed is recommended to avoid calluses on the joints.

The Bloodhound will do okay in an apartment if sufficiently exercised. They are relatively inactive indoors and do best with at least an average-sized yard.

Bloodhounds love a good run and need a lot of exercise. They should be taken for a long daily walk. However, if it picks up an interesting scent, you may find it difficult to get its attention. They have an incredible level of stamina and can walk for hours on end. They would greatly enjoy hiking with you, but keep in mind their urge to investigate any interesting scent. Do not overtire them with walks until they are fully grown. The Bloodhound is a big dog that grows rapidly and needs all its energy for developing strong bones, joints and muscles.

The smooth, shorthaired coat is easy to groom. Groom with a hound glove, and bathe only when necessary. A rub with a rough towel or chamois will leave the coat gleaming. Clean the long, floppy ears regularly. Bloodhounds have a distinctive dog-type odor. This breed is an average shedder.

This breed is more than one thousand years old. It was perfected, not created, by monks of St. Hubert in Belgium. Later the dogs were brought by the Normans into England and then to the United States. It is also known as the Flemish Hound. Throughout the world, breeds such as the American Coonhounds, Swiss Jura Hounds, Brazilian Fila Brasileiro, Bavarian Mountain Hound, and many others trace their lineage back to this ancient scent tracker. Today, all Bloodhounds are black & tan or red, but in the Middle Ages they were solid in color. The white variety, which existed in medieval Europe, was called the Talbot Hound and became extinct in the 1600s, but contributed to the development of many other breeds including the white Boxers and tri-colored Basset Hounds. The Bloodhound thrives on the hunt rather than the kill. It takes great pleasure in tracking and has been used to hunt animals, criminals, runaway slaves and lost children. Today this slow mannered, rich sounding breed is both tracker and companion. Although it has a pleasant temperament, it is not easy to obedience train, most likely largely due to the fact that it gets distracted from human command, more interested in all of the exciting strong smells around him. 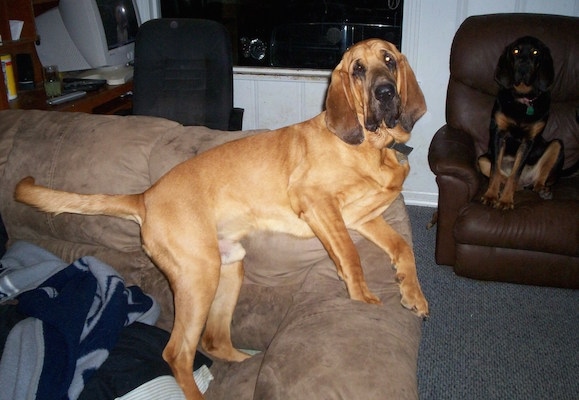 "This is my Bloodhound Flash. I am always finding Flash sneaking on to the furniture for a nap. I keep putting him onhis dog beds, but he prefers not to sleep on them. I took these pictures to prove that I am not the one getting dirt on the furniture." 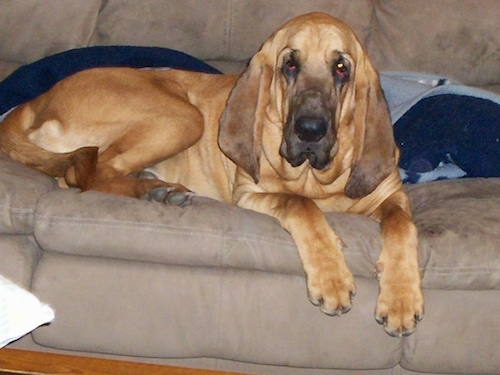 Flash the Bloodhound on the sofa 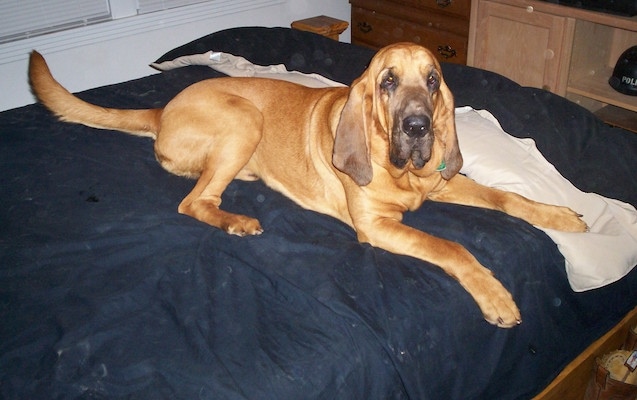 Flash the Bloodhound on the bed 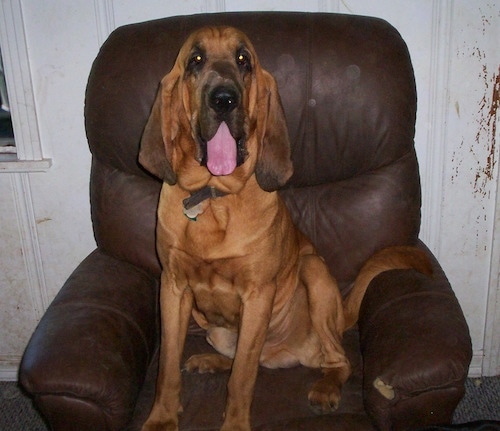 Flash the Bloodhound on the recliner 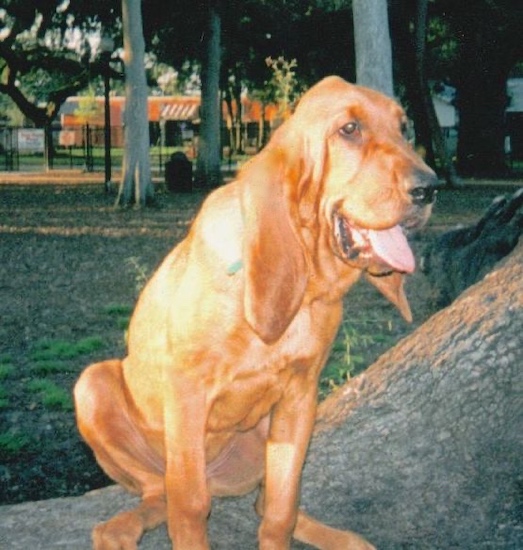 "Sherlock the Bloodhound sitting on a tree trunk. He loves to climb the tree and show off." 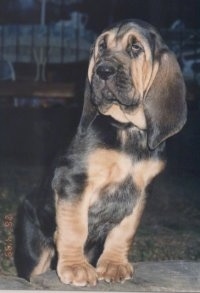 See more examples of the Bloodhound