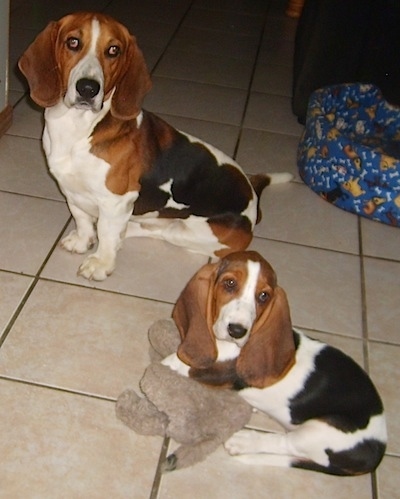 Basset Hounds—Buckle at 3 years old and Bella the Basset puppy at 5 months old—"Buckle the male is strong and wise. He opens the sliding door by himself to come in to the house. Bella the female is still a pup and we are still waiting to see what she's going to be like."

The Basset Hound is a short, relatively heavy dog. The head is large and well-proportioned with a rounded skull. The muzzle is deep and heavy with the length being greater than the width at the brow. The brown eyes have a soft, sad look to them and are slightly sunken with a prominent haw. The darkly pigmented lips have loose hanging flews and the dewlap is very pronounced. The skin hangs loose like elastic and falls in folds on the head. The velvety ears are set low and extremely long hanging toward the ground. The large teeth meet in either a scissors or even bite. The chest is very deep, extending in front of the front legs. The dog’s hindquarters are very full and round. The paws are big. The dewclaws may be removed. The coat is dense, short, hard and shiny. There are no rules concerning color, but it is usually black, tan, white, red, or white with chestnut or sand-colored markings.

The Basset Hound is sweet, gentle, devoted, peaceful and naturally well-behaved. It fits into family life well. Its temperament should always be friendly, and never vicious, moody or harsh, and would only become so if the owners lead the dog to believe he is pack leader over humans. It is mild but not timid; very affectionate with its master and friendly with children. It can be a bit stubborn with meek owners and needs a firm, confident, and consistent owner who displays natural authority over the dog. Dogs need to know the rules of the house and have the humans stick to them. Bassets like to do tricks for food. They have a deep musical bark. Housebreaking is difficult, but they do well with patient, gentle training. With proper training, they are obedient, but when they pick up an interesting smell, it's sometimes hard to get their attention, as they like to follow their noses and may not even hear you calling them back. Only allow your Basset off lead in safe areas.

Do not overfeed these dogs because extra weight places too great a load on the legs and spine. A problem area is possible lameness and eventual paralysis because of short legs and a heavy, long body. As they are prone to bloat, it is also wise to feed them two or three small meals a day instead of one large meal. If they do eat a large meal keep an eye on them for several hours for any signs of bloat.

The Basset Hound will do okay in an apartment. They are very inactive indoors but outdoors they will run for hours in play if given the chance. They will do okay without a yard, but should be given plenty of opportunities to run and play to keep healthy and trim.

To keep the Basset Hound healthy, it should be given plenty of exercise, including a long daily walk to keep the dog mentally stable, but discourage it from jumping and stressing the front legs. This breed will run and play by the hour when given the chance. Because of their keen noses they tend to roam when they pick up a scent. Take care when off lead that the dog is in a safe area. When they pick up a scent they may not even hear you calling them back as their complete focus will be on finding the critter at the other end.

Average of 8 puppies, large litters are common; known to have 15 or more puppies in one litter

The smooth, shorthaired coat is easy to groom. Comb and brush with a firm bristle brush, and shampoo only when necessary. Wipe under the ears every week and trim toenails regularly. This breed is a constant shedder.

The Basset Hound is an old breed which is a direct descendent of the Bloodhound and has a nose that is almost as outstanding. Some sources suggest the Basset Hound may have originated from genetic dwarf dogs that were born in litters of different types of hunting hounds. The name "Basset Hound" comes from the French word "bas" meaning low. The Basset Hound’s long ears have been poetically described by Shakespeare as "Ears which sweep away the morning dew." The breed was first presented at a Paris dog show in 1863, and it was there the dog's popularity began. Its popularity spread to England and feuds soon arose between those who wanted the dog to be more of a show dog, keeping it more as a companion dog, and those who wanted to keep it as a hunting dog. The breed spread to America where breeders started developing a dog which they felt covered both hunting and companion / show traits. The breed was recognized by the American Kennel Club in 1885. Able to hunt in both packs or alone, the dog is good at hunting in the den and in the open. It is used to hunt fox, hare, opossum and pheasant. While the dog’s reflexes are slow, it has an excellent sense of smell. The fact that it is relatively slow on its feet means it can be more convenient for hunters who are on foot. It is also less likely to scare game out of reach. It is said that George Washington owned Basset Hounds that were given to him by Lafayette after the American Revolution. 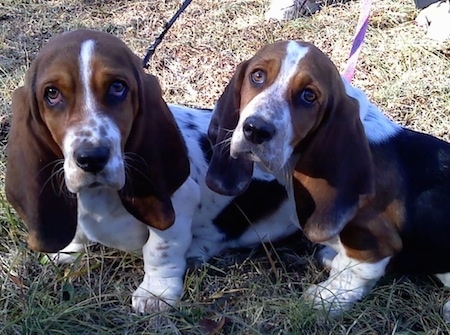 DaisyDuke & Roscoe the Basset Hound puppies at 15 weeks old—"Our Bassetts are siblings and love to rough house all the time. They love to hike & love to use their noses. They spend their day watching our pet goats. We love Cesar Milan & watch him all the time!" 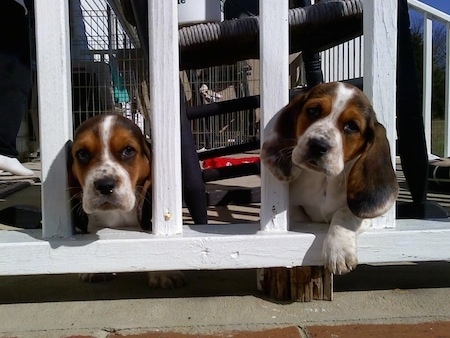 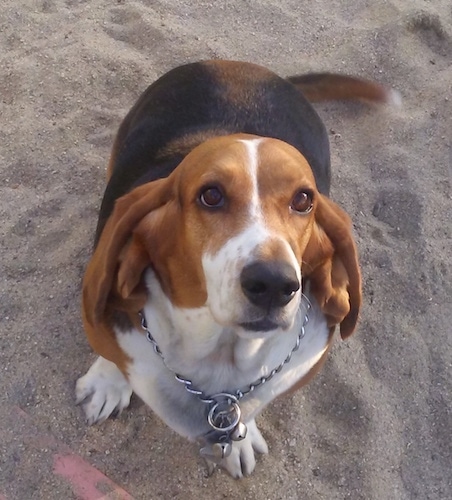 Bella the Basset Hound at 2 1/2 years old—"Bella's my new Basset Hound. I am her 5th owner in two and a half years. I don't understand why, she's an excellent dog. I took a chance with her anyway, I really didn't need another dog. I love her very much. She is house trained. She has no bad habits. So don't let a history of a lot of previous homes make up your mind for you when adopting a dog. I took a chance and I love her." 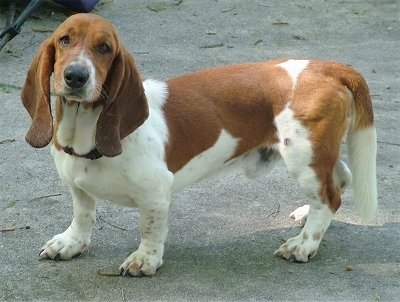 "This is Bandit. He is 2 years old and a purebred Basset. He loves to play and bark at the squirrels. He loves everyone and is very smart and puts my sandals by the door when he wants to go out. He is a very happy dog and I love him." 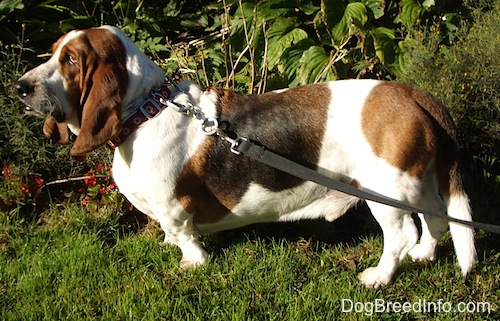 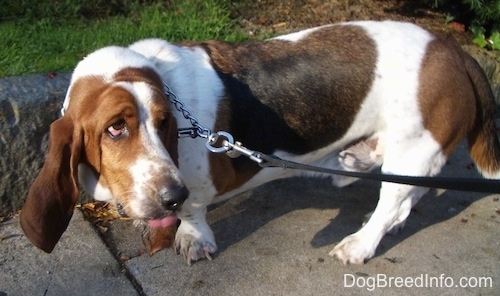 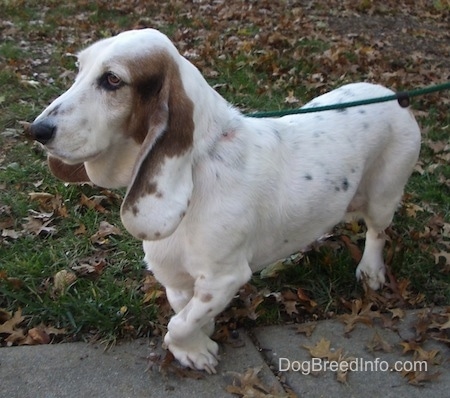 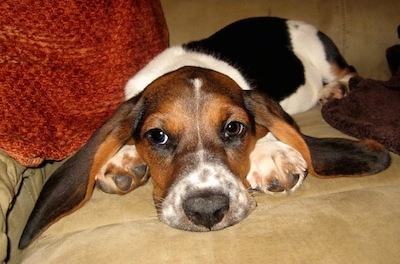 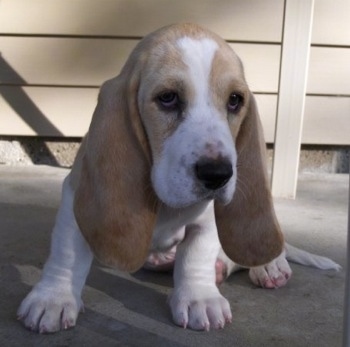 "This is our new addition to our family. This is Daisey Mae, our full-blooded Basset Hound. Here she is 8 weeks old. She loves the sun, long walks and will eat each meal like it's her last. :) We love her so much. We hope you do, too. :)" 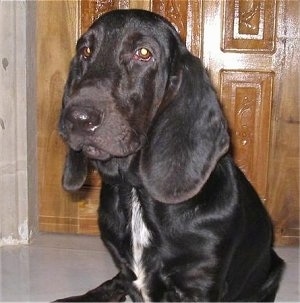 Droopy the black Basset Hound at about 1½ years old