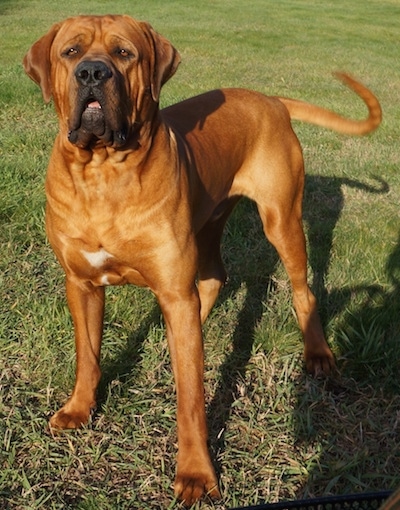 The Tosa, also called the Tosa-Inu or Tosa-Ken, is a stately, massive dog. The large head is broad with a rather abrupt stop. The muzzle is moderately long and squared-off. The black nose is large. The teeth meet in a scissors bite and the jaws are powerful. The small eyes are dark brown in color. The high-set ears are small and thin, hanging close to the cheeks. The neck is muscular, with a dewlap. The tail is thick at the root, tapering to a point and reaching to the hocks when the dog is relaxed. The feet are well padded with dark nails. The coat is short, dense and hard and comes in solid, brindle or multi-colored of red, fawn, apricot, yellow, black, black and brindle and black and tan. There is often a black mask and there may be small white markings on the chest and feet.

The Tosa is loyal, sensitive to the tone of one’s voice, paying close attention to commands. This is not a noisy breed. The Tosa was once used for dog fighting and was bred to fight quietly as Japanese dog fighting rules called for silence. This natural guard dog is protective, courageous and fearless. It needs an owner who knows how to display leadership at all times. Socialized this dog well starting at puppyhood. Aggression and attacks on people are due to poor handling and training. Problems arise when an owner allows the dog to believe he is pack leader over humans and/or does not give the dog the mental and physical daily exercise it needs to be stable. This breed needs owners who are naturally authoritative over the dog in a calm, but firm, confident and consistent way. A stable, well-adjusted and trained dog is for the most part generally good with other pets and excellent with children in the family. It must be firmly trained in obedience from an early age. This is not a breed for first-time dog owners. A well-balanced Tosa that knows his place in the pack will not snap or bite. Early proper manners and training is a must with this breed; teach the dog to heel on the lead and go in and out doorways after the humans. The Tosa is great with children in the family. Docile and affectionate with the owner. It is protective yet gentle. The Tosa has a very stable temperament. It makes an excellent guard dog. Its deep bark and massive size is enough to keep out intruders. Can be reserved with strangers, however a well-balanced Tosa will accept newcomers if properly introduced. These dogs need a strong, firm, consistent, confident pack leader who can keep them in their rightful place, below all humans in the alpha order. It is a natural instinct for a dog to have an order in its pack. When we humans live with dogs, we become their pack. The entire pack cooperates under a single leader. Lines are clearly defined and rules are set. You and all other humans MUST be higher up in the order than the dog. That is the only way your relationship can be a complete success. Tosas that are allowed to take over may be dog aggressive. Keep the Tosa away from other dogs that may want to fight, because the Tosa will most certainly win. They have a very high pain tolerance due to their fighting origins.

Both parents should have the following certificates: CERF (eyes) and OFA (hips and elbows). Also prone to bloat. Ask about bloat in the lines. Bloat can be a major problem in these large dogs.

The Tosa needs to go on a daily walk or jog, to fulfill the canine’s primal instinct to walk. Dogs that do not get to go on daily walks are more likely to display behavior problems. In theory this breed requires only an average demand for exercise but will enjoy and be healthier with more. These dogs make good jogging companions.

The Tosa is easy to groom. An occasional brushing to remove dead and loose hair is all that is needed to keep the coat looking good. The Tosa may not drool as bad as other mastiffs but, they do drool, especially when they get excited, hot or when they drink. This breed is a light shedder.

The Tosa has been bred for hundreds of years in Japan. The country has a long history of dog fighting, beginning in the 14th century. It was developed between the period of 1868 and 1912 by crosses with the Kochi (a local Japanese breed), native Shikoku fighting dogs, with Western breeds such as the German Pointer, Mastiff, Great Dane, Bulldog, St. Bernard and the Bull Terrier. Tosas were often referred to as the "Sumo wrestler of the dog world." In Japan, the Tosa is considered a national treasure. Although dog fighting is now illegal in Europe, North America, and Japan, secret, illegal pit fights continue in remote rural regions of Japan, where the Tosa, at 66-88 pounds (30-40 kg.)—smaller than those bred in the West—is still used for fighting. The breed excels at Japanese-style dog fighting. Japanese dog-fighting rules in the last century demanded that dogs fight silently, without cowering, and the Tosa fought by these rules—relentlessly and silently. The Tosa is a rare breed, even in its native land and has only recently been introduced to the USA. Unfortunately, this breed is banned in some countries as a dangerous breed. It is definitely unsuitable for beginners, but with the proper socialization, handling and training, it can make a wonderful family companion. This massive dog excels at weight-pulling and makes a great watch and guard dog. 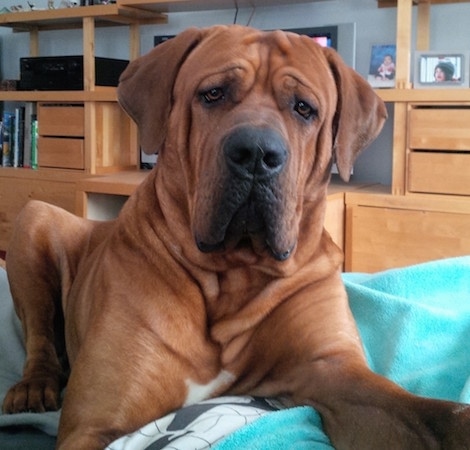 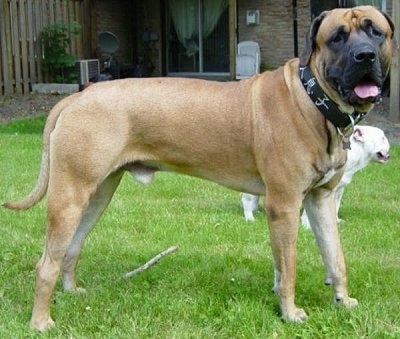 Taro the Tosa at 18 months old 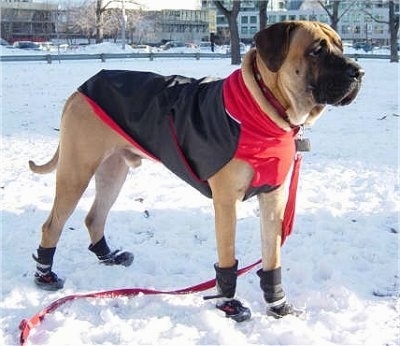 Taro the Tosa from Matsu Kennel dressed for the snow 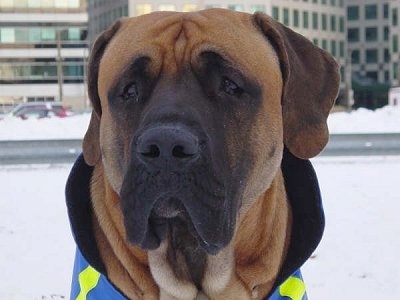 Taro the Tosa from Matsu Kennel 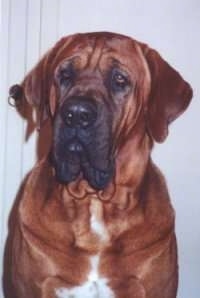 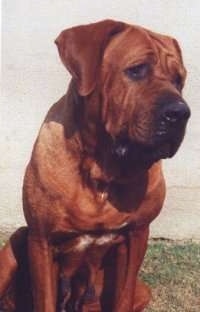 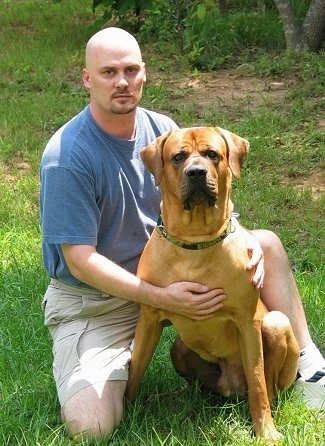 See more examples of the Tosa