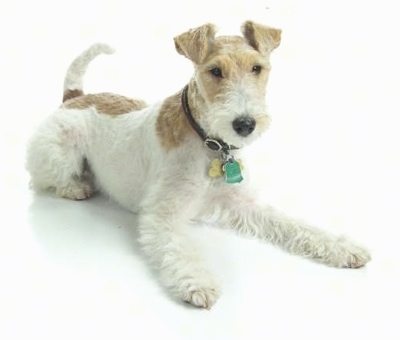 The Wirehaired Fox Terrier is a medium-sized dog. The skull is flat, moderately narrowing to the eyes. The stop is slight. The muzzle gradually tapers to the black nose. The teeth should meet in a scissors bite. The eyes and eye rims are dark in color. The small, V-shaped ears drop forward close to the cheeks. The neck is thick and muscular. The legs are straight. The tail is high set and is usually docked by 1/4, leaving 3/4 of the original length. Note: the practice of docking tails is illegal in most parts of Europe. The wiry coat has dense, twisted hairs, similar to the hair on the outside of a coconut. The hairs are so thick and close together that when they are parted you cannot see the skin. It has a short, soft undercoat. The coat is predominately white with black or brown markings.

The Wirehaired Fox Terrier is a brave and bold terrier. It is cheerful, lovable, enthusiastic and playful, especially with children. Affectionate, very devoted and loyal with the family, it truly enjoys their company. Because of its strong hunting instincts, the Wire Fox Terrier will also hunt and possibly kill other none K-9 animals, such as rabbits and birds, if given the chance. Keep this breed properly leashed or in a completely enclosed area, because the Wire Fox Terrier likes to go off and explore. If the Wire Fox Terrier is properly socialized and introduced it can get along just fine with other dogs. Very intelligent, this breed can be taught to perform tricks. This is a relatively dominant, very high-energy dog that can become stressed and frustrated without the proper type and amount of exercise, both mental and physical. It not only needs its body exercised but its mind as well. It is paramount you are this dogs 100% firm, consistent pack leader. If the dog has meek owners and they allow this terrier to take over the home, developing Small Dog Syndrome, it will begin to display varying degrees of behavior issues. The issues may include, but are not limited to, dominance challenges, guarding objects or places or even its own food from the owner, excessive barking, jealousy, separation anxiety, destructiveness, dog aggressiveness, willfulness, growling, snapping, biting and untrustworthiness with kids and sometimes adults. The dog may become ready to charge at all times, scrappy and impulsive, as it attempts to defend ITS top position in the alpha order. These are not Wire Fox Terrier traits, but rather behaviors brought on by the way the dog is treated by the people around it. These behaviors can be corrected as soon as the dog's instincts are met: stable, firm, consistent rules to follow, limits as to what it is and is not allowed to do, along with a daily pack walk or jog.

Epilepsy is highly suspected to have a genetic component in this breed. Some minor concerns are post nasal drip, lens luxation, distichiasis, cataracts, Legg-Calvé-Perthes syndrome and shoulder dislocation. Prone to mast cell tumors.

The Wire Fox Terrier will do okay in an apartment if it is sufficiently exercised. It is very active indoors and will do okay without a yard.

Wirehaired Fox Terriers need a daily walk or jog. If it is possible, they would love to run free in a safe area. Keep this dog on a leash if there are small animals around. The urge for these dogs to hunt is strong and they are likely to take off chasing a small animal.

If your Wirehaired Fox Terrier will be a pet, you can get away with brushing it with a firm bristle brush and bathing only when necessary. To keep the coat looking its best, it must be stripped several times a year and more frequently for show dogs. There is a complex show-grooming routine. Professional groomers have quite a bag of tricks to keep the Wire looking its best for the show ring. The Wire sheds little to no hair and is good for allergy sufferers.

The Fox Terrier was developed by crossing ancient Dachshunds, English Hounds, and later the Fox Hound and Beagle. It is one of the oldest terrier type dogs, originating in the British Isles in the 17th century. It was used by farmers who needed dogs to help get rid of the animals that would prey on the farmers stock, such as fox and rats and other small vermin. The Fox Terrier would find the animal in the ground, relentlessly digging, barking, growling and lunging until it harassed the animal out of its den where the hunter could then kill it. The Fox Terrier came in both a smooth coat and a wirehaired coat and both were considered the same breed for many years. The Wirehaired Fox Terrier was bred by crossing in the rough coated black and tan terrier, for use in rough country, its coat being less vulnerable to damage than that of the Smooth Fox Terrier. The first standard for the Smooth Fox Terrier was established in 1876, separating it from the wirehaired dogs. However, it is still considered the same breed with different coat varieties by some clubs, but has been separated in the United States since 1984. Both the Smooth Fox Terrier and the Wirehaired Fox Terrier were recognized by the AKC in 1885. Some of the Fox Terrier's talents include: hunting, tracking, watchdog, agility and performing tricks. 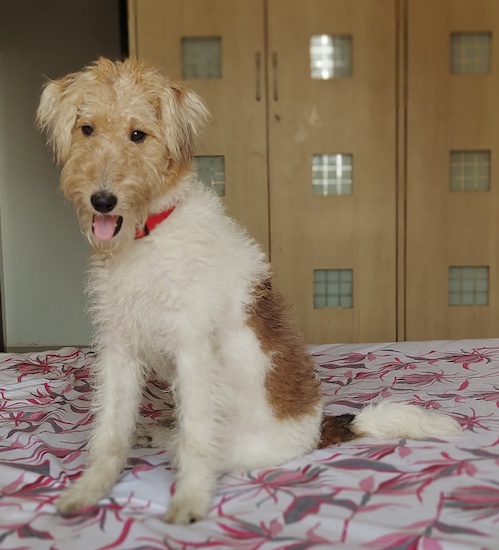 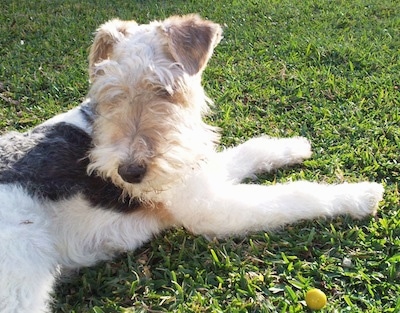 "Hi. These are photos of Frida, our female Wirehaired Fox Terrier when she was only 8 months old. She is an excellent dog, loves to be with the family all day long. When I first got her I was a little scared ’cause I heard that the breed was terrible and annoying, that they will chew through everything, but it is not like that at all. She needs a lot of exercise, but is really calm inside the house." 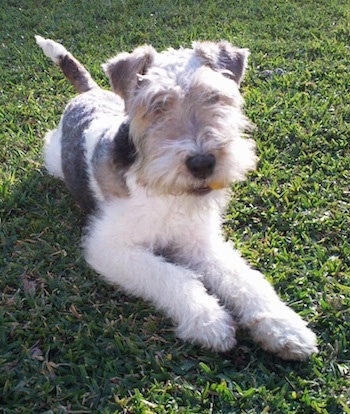 "This is Frida, our female Wirehaired Fox Terrier when she was 8 months old." 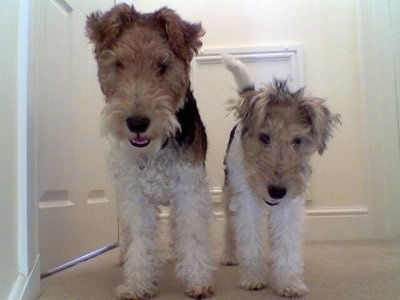 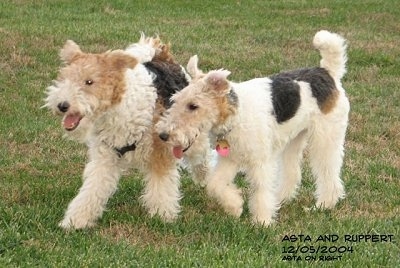 Asta and Ruppert, two happy Wire Fox Terriers are directly related through their father, who won best in breed at the 2003 Westminster Dog Show. 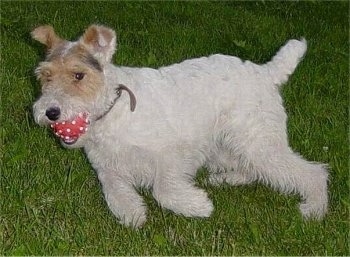 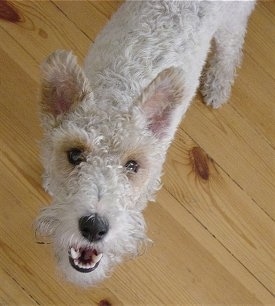 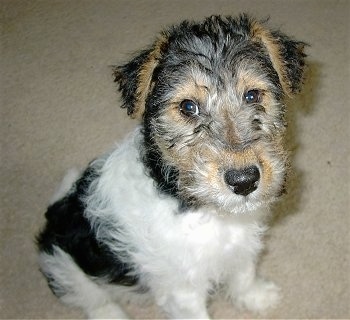 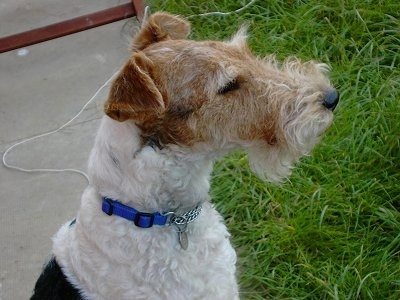