of Assateague and Chincoteague Islands 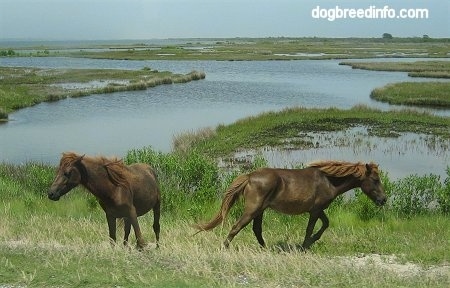 Assateague Island is a 37-mile long barrier island off the coasts of Maryland and Virginia, extending from just south of Ocean City, Maryland. It’s a long, skinny island with the widest point being only 3 miles. On one side is the Atlantic Ocean and the other the beautiful Chincoteague Bay. It became a national seashore in 1965. It serves as a refuge for many forms of wildlife, but is most known for its famous wild ponies. Over 300 wild ponies live on Assateague Island. Assateague Island has a lighthouse which has been in operation since 1833, and is still active today. Chincoteague Island is right next to Assateague. Chincoteague is only 7 miles long and one and a half mile wide. It lies entirely in Virginia and is situated in between Assateague Island and the Virginia mainland. Unlike Chincoteague, which is almost fully developed, Assateague is largely undeveloped, except for a few facilities that serve the thousands of tourists that visit the island each year. Visitors can camp in the campground, enjoy the beaches, hike nature trails and of course, view the breathtaking wildlife.

The name Assateague is an Indian name for "The Marshy Place Across" and Chincoteague is Indian for "Beautiful Land Across the Water".

Assateague ponies are a unique breed that are almost as big as horses. Scientists do not actually consider them to be a true pony. These Assateague horses have always been called "ponies" by the people living on the island and the name has stuck through the years. They come in a wide variety of colors, including brown and white, white and black pintos, solid brown, palominos and buck-skinned, among other colors. 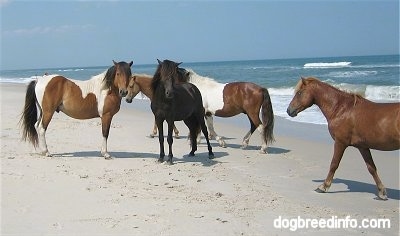 The ponies of Assateague can be seen in different bands, or herds, scattered along miles of Assateague's shoreline. The herds consist of about 4 to 12 ponies, usually including one adult stallion, mares and foals. The stallion is the leader of the herd. He tries to protect the herd from anything he sees as a threat, such as human contact or other stallions.

About 70 foals are born on Assateague each year. Foals are born in the spring. Mares are pregnant for almost a year. They usually give birth at night. When the time comes the pregnant mare will wander away from the rest of the herd and give birth in a grassy area or behind a sand dune. Within minutes of the foal’s birth it is wobbly, but can stand and begin to walk. They will nurse from their mothers about 5 times an hour. At a few weeks old they will nibble grass, but will still nurse for several months as their main source of food. Foals spend a lot of their time sleeping with their mothers standing guard.

When male foals grow older the stallion of the herd will often pick fights with him. It is time for the young male pony to leave before he challenges the stallion for control over the heard. Small groups of bachelor colts wander the island. When they become strong enough they attract young mares and form their own herd.

While most domestic farm ponies live to be between 30 and 40 years old, the average lifespan of the Assateague pony is about 20 years. Life is harsher for wild ponies than it is for those that live on a farm. 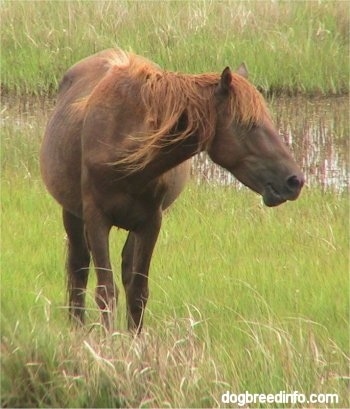 Eighty percent of the ponies’ diet consists of salt marsh grass. The salt causes them to drink twice as much water, giving them a bloated or fat look. They will sip salt water, but they will find fresh water throughout the island. They also eat seaweed, rosehips bayberry twigs and even poison ivy. 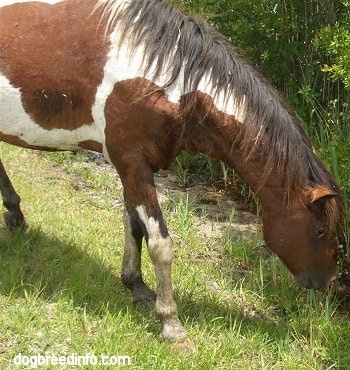 Summer is the hardest season for the ponies. It’s not only hot, but flies and mosquitoes bite, often forcing the ponies out of the forest and marshland, onto the beaches. Wild ponies are well accustomed to the shifting tides that affect their daily lives. They know the best areas for water crossings. To relieve themselves from the insects they will go into the ocean and let the waves crash over their backs and roll in the sand. They use their tails to swat insects away. They will also climb up on high sand dunes on windy days, using the ocean breeze to keep insects off of them. Autumn is the easiest season for the ponies. The weather is cool but not too cold and biting insects have, for the most part, disappeared. Tourism is down and the island is calm and beautiful. Winter can be harsh, but not as harsh as summer. In winter the island is very quiet. There are no bugs, most birds have flown south and even some of the marine life has moved to warmer waters. Snow is rare on the island, but it does occur. The ponies grow long, shaggy coats which protect them from the elements. There is enough dried grass around the island to feed the ponies through the winter.

A visit to Assateague Island is well worth the trip. If you are visiting the island in the warmer months, be sure to bring your bug spray, as there is a high amount of mosquitoes. Bug spray is a must if you plan to get out of your car at all. 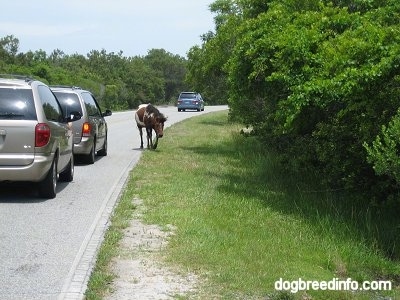 The ponies of Assateague are not hunted by any predators on the island. The only real threat they encounter is human. Assateague Island has become a tourist attraction, which consists of a beach and campground, along with walking trails and tour boats. Some tourists feed the ponies unhealthy food, which attracts the ponies to the road where they can be hit by cars. These famous wild ponies are not frightened of people, and will walk right up to humans. One must keep in mind, while it is nice to view the ponies, it should be done from a safe distance. These beautiful ponies may look tame and friendly, but they are still wild animals. They can bite or kick without warning.

In order to control the island's pony population and ensure the healthy survival of the ponies that live on Assateague, Virginia runs its Chincoteague wild pony swim. This annual Pony Penning event has been held since 1925. The Virginia herds are rounded up annually on the last week of July. A select group of firefighters are sent out on horseback to round up all the ponies they can find on the southern end of the island. The ponies are herded across a narrow channel from Assateague to Chincoteague Island. Forty thousand visitors wait along the crowded shoreline for the ponies to arrive. The water is about 25 feet deep and the swim lasts about 3 to 5 minutes. The ponies are driven down Main Street to the carnival grounds. On the following day an auction is held, where many of the foals are sold to raise money for the fire company. Unlike adult wild horses, foals are easy to tame and can make gentle pets. The remainder of the ponies are herded back to Assateague. The famous book Misty of Chincoteague tells a story about this annual ritual.

How the wild ponies arrived at Assateague hundreds of years ago is still a mystery. Some believe the ponies swam ashore, arriving on Assateague Island during a Spanish galleon shipwreck that sank off the beach during the 16th century. Others believe Colonial Virginia farmers brought them over to graze on the island after the legislature enacted laws requiring fencing and levied taxes on all livestock due to crop damage caused by free-roaming farm animals. However they reached Assateague, the ponies became quite well adapted to the barrier island's environment. Natural selection helped the wild ponies evolve into the hardy size horse that flourishes on the island today. 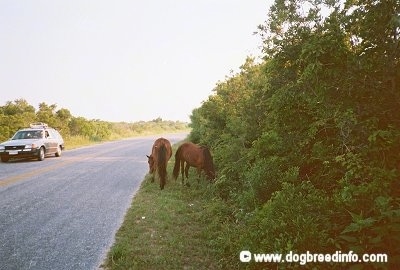 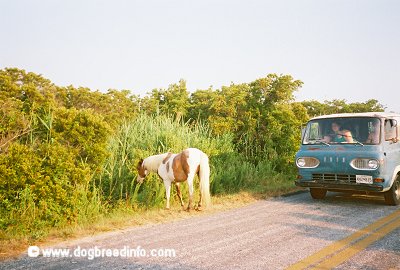 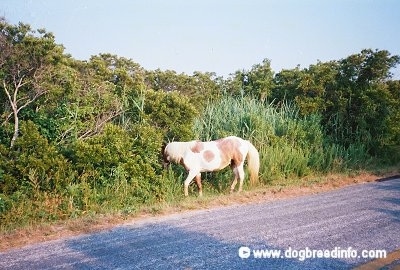