"This is Jaxson at a little over a year old. His dad was a brindle purebred Boxer and his mother was a fawn purebred Pit Bull. He took over his mom's traits for the most part. He is a great dog, and great with children."

The Bullboxer Pit is not a purebred dog. It is a cross between the Boxer and the American Pit Bull Terrier. The best way to determine the temperament of a mixed breed is to look up all breeds in the cross and know you can get any combination of any of the characteristics found in any of the breeds in the hybrid. Not all of these designer hybrid dogs being bred are 50% purebred to 50% purebred. It is very common for breeders to breed multi-generation crosses. 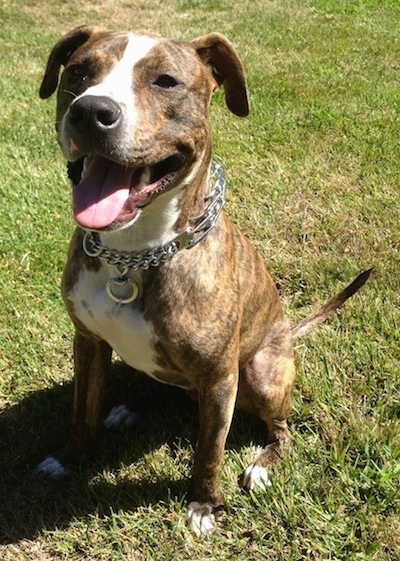 "Raj and Danielle are the proud owners of Marco, a Pit / Boxer / everything-else mix. He's 11 months old (soon to be 1) and enjoys chew toys, meat sticks, long walks on the beach (literally) and generally giving everyone love." 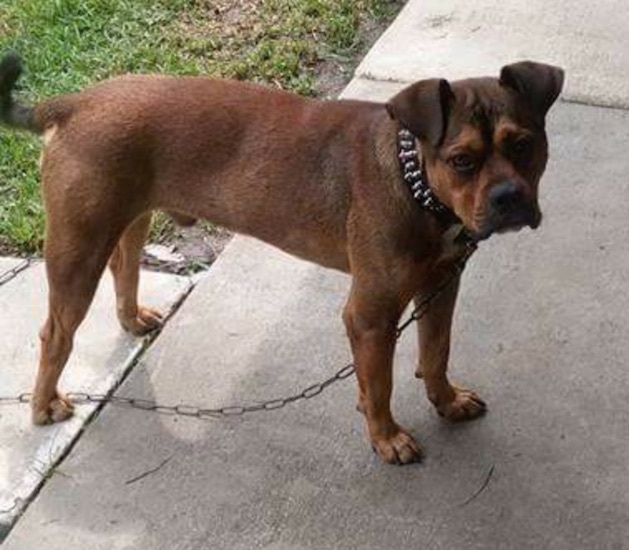 Pharoah the Bullboxer Pit at 1 1/2 years old—"Pharoah loves the water. He was a bit shy at first, but once he got to know me he came around. He has a high dislike for other dogs from being attacked at a young age, but he is a good dog all around." 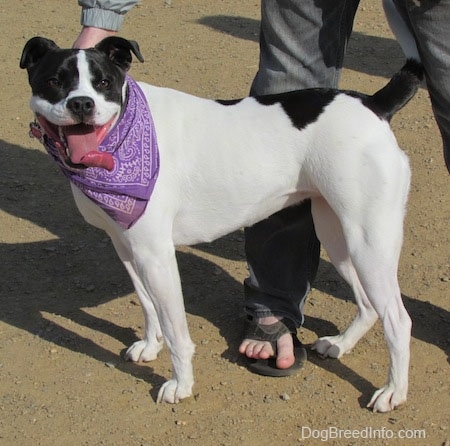 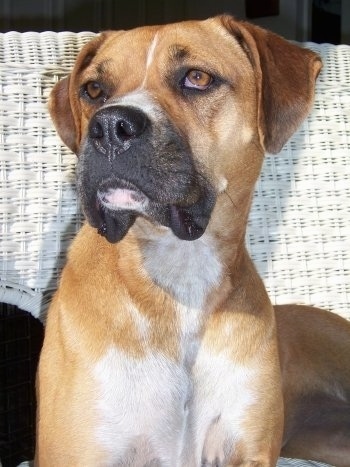 Daisy Duke, a Bullboxer Pit at 2 years old—"Her mother was a Boxer and her father was an American Pit Bull Terrier." 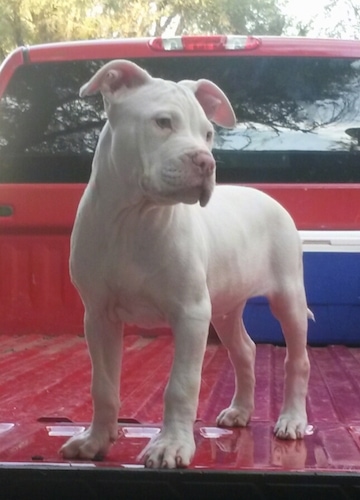 Kabo the pure white Bullboxer Pit as a puppy at 4 months old in the back of a red pick-up truck—"Kabo's father is a Boxer and mother is a Pit Bull. He is a energetic little guy who is constantly pestering his mom to play with him. He loves his treats and is starting to learn basic commands very quickly. When the day is over and it's time to call it a night he's the first one to cuddle up with you and is off to dreaming (most likely of chasing his mom around the yard) within minutes. He has been a great addition to the family, and unlike his parents when they were his age he has been great at not chewing on things other than his chew toys. I've only lost one hat to his playfull chewing, which is considerably better than countless shoes, cords, hats etc that his parents had destroyed by the time they were 4 months old. I look forward to watching him grow up and turn into what I'm sure will be the most popular and handsome dog on the block." 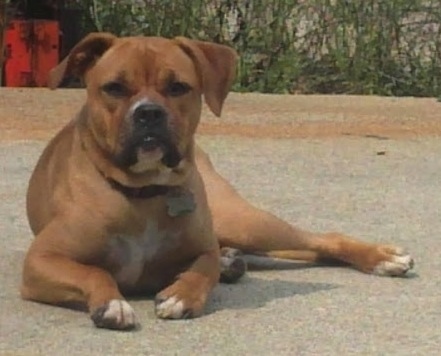 Destiny the Bullboxer Pit as an adult—"Destiny is a Pit Bull / Boxer mix. She is a great dog. She is very loving and has more Pit Bull characteristics than Boxer. She has the Boxer lips and lower jaw that sticks out a little further than the upper." 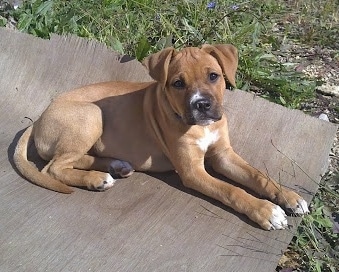 Destiny the Bullboxer Pit as a puppy 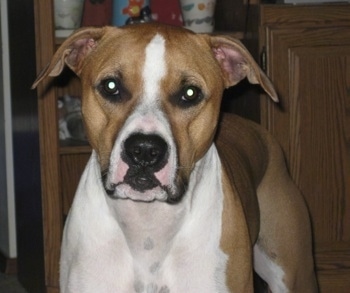 Rocket the Bullboxer Pit (American Pit Bull / Boxer mix) at 2 years old—"He is a very energetic and hyper dog. He is very fast, hence his name. Rocket is a fast learner. He learned many tricks including high five, shake, sit and lie down at only 4 months old. Rocket loves to learn! He loves Meaty Bones. He is a loving dog like a Boxer but also strong and muscular like an American Pit Bull. I rescued Rocket from people who were feeding him raw meat and kicking him just when he was about a month old. He is the best dog I have ever had." 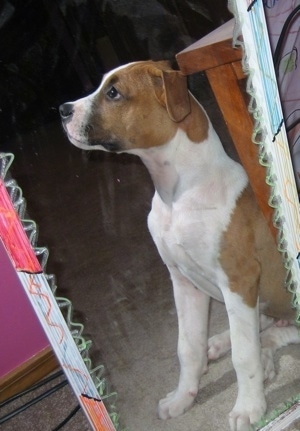 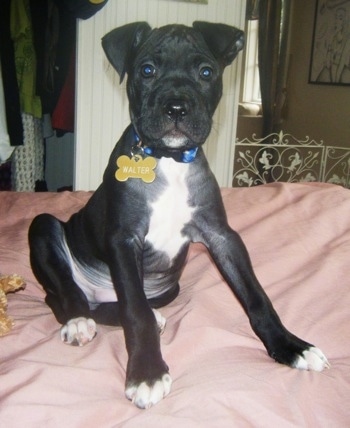 "This is Walter Mellin (get it?) at three months. His mother was a Pit Bull and his father a Boxer. He's very sweet and sleeps a lot. He's a climber! He's also very smart. He already knows sit, stay, lie down, come here, his name, go potty, as well as a variety of other words that indicate where to go (crate, bedroom, outside). He is so gentle that he can attack a balloon playfully for 35 minutes before popping it...with his nails, not with his teeth! Everyone loves him and he's changing everyone's attitudes about Pit Bull type dogs (or Pit Bull mixes)."