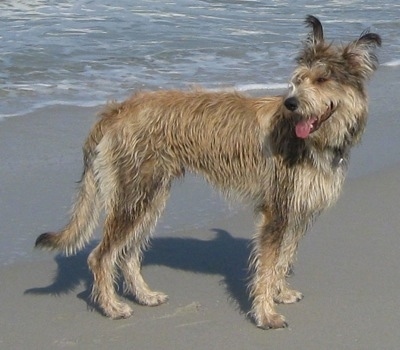 The Berger Picard is a medium-sized, well-muscled dog, slightly longer than tall. The natural tail normally reaches to the hock and is carried with a slight J-curve at the tip. The coat is harsh and crisp to the touch, and about 2-2.5 inches (5-6 cm) long all over the body. The thick strong hair is not fluffy and light, therefore it does not fly around in the air. Coat colors include grey, grey-black, blue-grey, red-grey, and light or darker fawn. A small white patch on the feet is permissible in the show ring but not favored. The ears are erect, high-set and quite wide at the base. The eyebrows are thick, but do not shield the eyes.

To bring up and prepare a Picard for its future life, it needs a well-balanced owner who can give the dog reassurance in everyday life along with daily pack walks. It has to be a member of the "pack," not to be locked away in a kennel and not to be isolated from the family. Intelligent, the Picard learns quickly but if the handler is not displaying a natural authority the dog will become stubborn and may not always want to learn. Meek or passive owners will most certainly run into behavior issues. It is a real task to train Picards for any kind of dog-sport. These dogs are very sensitive to the voice so being harsh with them is not necessary. One needs to be patient, calm, but firm, confident and consistent. Make the rules clear and sticking to them. It needs to be well-socialized when it is still young with close contact to friends, children, and even strangers, to give it the best start possible for a good and long life in society. If raised with other animals such as cats, pet rabbits, and geese, there is usually no problem in keeping them together. If well trained, the Picard usually will not hunt. In general it doesn't even have a strong hunting instinct. Picards that do hunt use sight more than smell. However, some lines do have stronger hunting instincts. Some like to bark and do so frequently unless the humans communicate to the dog that barking obsessively is an unwanted behavior. Without this proper communication between the human and the dog the barking can become a problem if you live surrounded by neighbors. Contact with other animals is not generally a problem. Energetic, alert, loyal and sweet-tempered with children, it is a fine sheep and cattle herder and a good farm guard.

Hip dysplasia is known, but not common because the dog is not super heavy. During the first year puppies sometimes get eye infections due to draught or dirt getting into the eye; after one year those problems usually don't appear anymore. There are some hereditary eye problems such as PRA and RD. All breeding dogs, males and females, should get checked for those diseases once a year or every two years. (PRA= Progressive Retina Atrophy, RD=Retinal Dysplasia)

The Berger Picard will do okay in an apartment if it is sufficiently exercised. It is not important how big the yard is, as long as the dog gets enough exercise during the day. However, the Picard always tries to stay close to its owner and family, so even if you have a big yard and give the dog the choice to pick where it wants to be, it will rather stay inside with you than alone outside. Inside the house the Picard is usually a very quiet dog, waiting for its time to go out to run, play and sniff around. If the dog is trained to stay on its own for some time during the day, it doesn't cause problems (if you have two dogs it's even easier). However, lots of people take their Picards to work with them. They lay themselves down under a table near their owner and just wait to leave again or to go for a walk.

Lots of exercise is required for this breed, including a long daily walk. It will enjoy swimming, running beside your bike, and a nice long walk. The Berger Picard makes an excellent jogging companion. Enrolling it in obedience class or in an agility skills class is an excellent way to keep it happy. They do not do well in competition because they find it almost impossible to perform consistently.

Comb and brush the thick waterproof coat only about once or twice a month, if possible only during the shedding season (spring and autumn for a couple of days); don't wash or trim the fur, just clean it off when dirty. This breed is a light shedder and has no doggie odor.

This is possibly the oldest of all the French shepherds, arriving in Picardy and the Pas de Calais with the Celts in AD 800. The Berger Picard is named for the Picardie region in northeastern France. Some experts insist that this breed is related to the more well-known Briard and Beauceron, while others believe it shares a common origin with Dutch and Belgian Shepherds. Although the Berger Picard made an appearance at the first French dog show in 1863, the breed's rustic appearance did not lead to popularity as a show dog. The two World Wars nearly caused the extinction of the Berger Picard and it is still rare. In France there are approximately 3000 dogs and in Germany approximately 350 of this breed. The Berger de Picard was recognized by the United Kennel Club on January 1, 1994. The breed was officially recognized by the AKC in 2016. 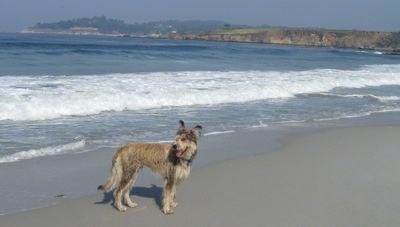 "Jett the Picardy Shepherd loves the beach so we spent his 1-year birthday at his favorite beach." 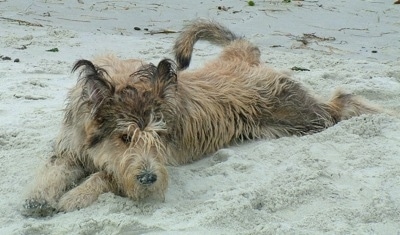 "Jett the Picardy Shepherd is quite the ham whenever there's a camera around, strike a pose!" 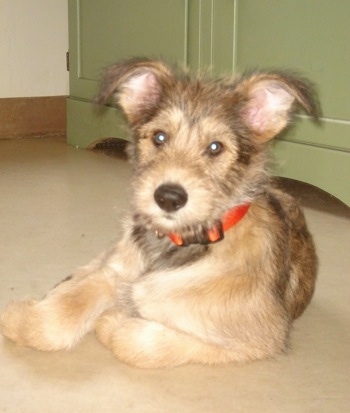 "Jett the Picardy Shepherd as a 3-month-old puppy—Jett's first day with us he was so little and unsure of the world." 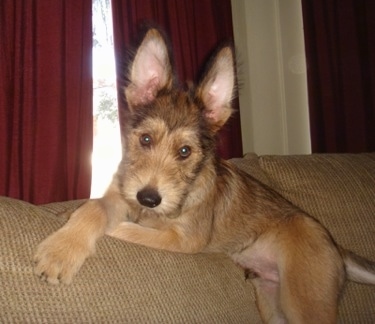 "Jett the Picardy Shepherd as a 4-month-old puppy—Jett's curiosity and confidence sure have grown, not to mention his EARS!" 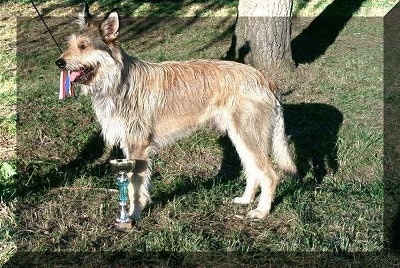 Cousteau the Picardy Shepherd winning at a dog show 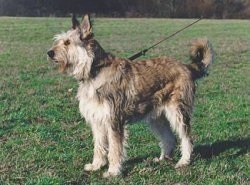 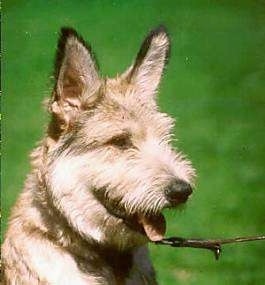