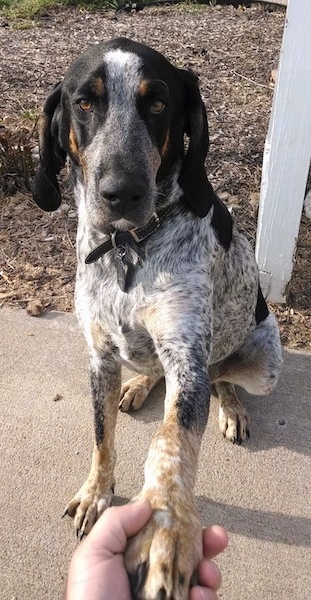 Waylon the Bluetick Coonhound at 4 years old—"Waylon is not an active working hunting dog, as far as me training him. Obviously hunting is in his blood and he has an amazing drive to do so. I got him as a companion dog but he could have been a great hunter. When I picked him out he was a nice plump little pup, then when it came time for him to be away from his mother he and the other two males in the litter had gotten Parvo. He was down to skin and bones. The breeder got him and the other pups to the vet in time for shots but they said they understood if I didn't want to adopt him. I however did want him. I hand fed him for almost two months and got him healthy again. He now weighs 86 pounds and is very active with no problems from having Parvo as a pup. He has a 175 acre farm to run on everyday and I do believe he has sniffed every square inch of it."

The Bluetick Coonhound has a broad head with a domed skull. The muzzle is square in profile, long, broad and deep, with a predominant stop. The round eyes are dark brown, large and wide set. The ears are thin and are set low. The legs are straight from the elbows to the feet. The tail is carried high, tapering to a point. The hind legs are long and muscular. Dewclaws are generally removed. The feet are compact with well arched toes. The smooth, glossy coat is short and dense and feels a bit coarse to the touch. The coat color is dark blue, with a thickly mottled body, spotted by various shaped black spots on back, ears and sides; tricolor coat has a uniquely speckled-blue look to it. Its heavy ticking is actually composed of black-colored hairs on a white background, creating a bluing effect. The head and ears are predominantly black. The dog can come with or without tan markings; when they do appear they should be over eyes, on cheeks, chest and below tail, and will have red ticking on feet and lower legs. AKC standard prefers more blue than black on body. There should be more blue ticking than white.

The Bluetick Coonhound is a very intelligent dog. Very devoted to its family, it makes a good companion dog. It does well living indoors and plays a fine guardian to his family and home. They are usually best with older children, but can also do well with younger ones. Some can be a bit dog-aggressive if the owner is not a strong leader relaying the message to the dog that is unacceptable behavior. Owners need to be this dog’s firm, confident and consistent pack leader in order to bring out the best in him. Socialize well, preferably while still young, to avoid them from becoming reserved with strangers. The Bluetick is a passionate hunter and should not be trusted with non-canine pets. This breed is extremely alert, attentive, and able to work over difficult terrain in bad weather. Do not let this breed off the leash in an unsafe area, as they may take off after an interesting scent. They have a strong instinct to tree animals. Raccoons inhabit all states and provinces in the US mainland and Canada, and have for centuries been pursued by hunters. Each year, hundreds of licensed night trials take place. Each trial lasts approximately three hours and involves three to four dogs. Points are given according to the dog's ability to find, trail and tree a raccoon. Points are lost for treeing game other than raccoons. Each dog has a unique "voice" which its owners usually can recognize. The Bluetick does not have a normal sounding bark, but rather a loud bay cry that almost sounds like a short howl. Blueticks are curious and have a tendency to follow their noses. If they pick up a scent they may wander off and not even hear you calling them back, or not care to listen, as they will be too busy trying to find the critter at the other end. Take care when letting them off leash that you are in a safe area. The Bluetick has extremely good eyesight, which allows it to work well at night. The Bluetick Coonhound excels in these trials. They can also be used to track fox or even cougar. The Bluetick has a fearless and warrior-like approach to the hunt. This breed may drool or slobber.

The Bluetick is not recommended for apartment life. They are relatively inactive indoors and will do best with at least a large yard. Do not let this breed run free off of its lead unless in a safe, secure area. Coonhounds have a tendency to follow their noses, and if they catch wind of a scent, they may wander off for hours following it.

Daily vigorous exercise is needed, which includes a long, brisk daily walk. Coonhounds that do not receive enough mental and physical exercise may become high strung and even destructive. This very anxious and energetic dog has been bred for severe physical exercise. Coonhounds are born natural hunters, so they have a tendency to run off and hunt if they are not kept well-fenced while exercising on their own. They have no road sense at all, so they must be kept in a safe environment.

An occasional brushing will do. In order to keep the ears clean and infection-free, regular attention is a must. 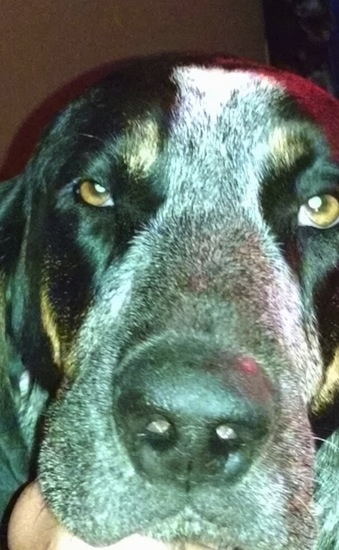 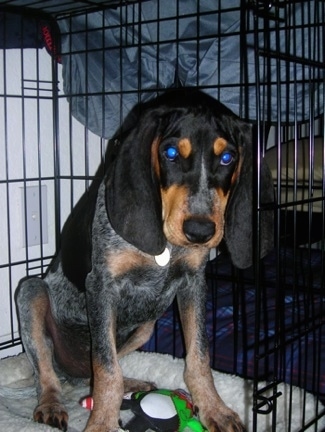 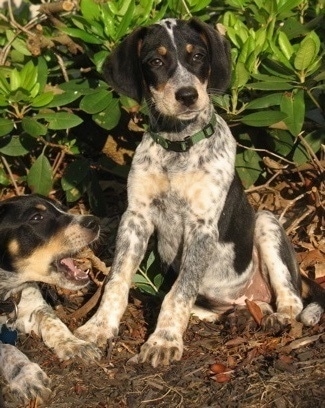 "Jade and Ike, my Bluetick Coonhound puppies—at the time when I took the photo, they were 3 months old. I have been around them since the day they were born and fell in love with the two of them. The first picture of the one sitting upright in the flower bed is of Jade. She was the biggest out of the litter of 10. She is more aggressive in her play then her brother, Ike. She is more headstrong and just pushier in general. The male is named Ike; he is in the second picture. He was the firstborn and the runt of the litter. Ike is going to be trained for Search and Rescue and Jade might be, too, we haven't decided yet. They are a very fun loving breed. Both their father and mother are very easy going and loved to be around people, so we knew that they would be the perfect breed for my family. We love to take them hiking in the woods or in the local fields. They are walked at least 5 miles everyday. We have a two and a half acre yard fenced in for them to run around and play in. They still do not know what to do with the three cats we have; they still think the cats will play with them. The only bad habits they have are puppy habits that we broke right away, like chewing on furniture and other people. They are very even tempered dogs. They’re beginning to learn how to bay and it is an amazing sound. I wish that there were more in the United States than there are, but they are not a well-known breed. We always get some interesting remarks when people try to guess what they are—normally it is a mix between a Beagle and an Australian Cattle Dog. It has now become a game for my family to have people guess what type of dog they are. Ike and Jade are well loved by everyone that comes into contact with them and have a special place in this family." 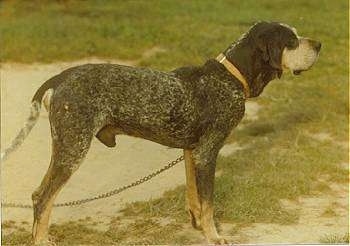 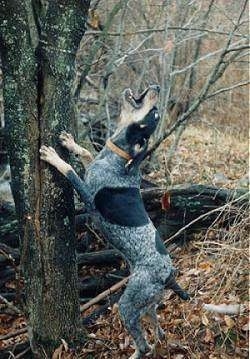 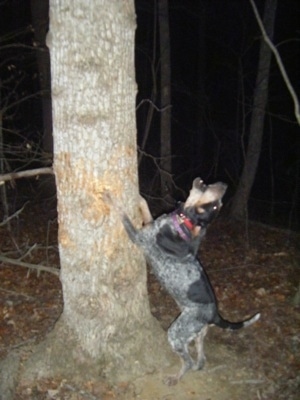 "This is Clary's Lazy Daisy, affectionately known at home as Daisy. Daisy is a Bluetick Coonhound. Daisy is UKC/AKC registered. She is a UKC Show Champion and Nite Champion."