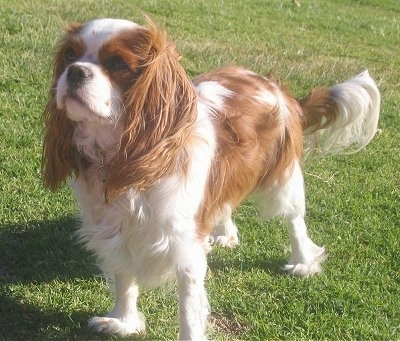 Daphne the Cavalier King Charles Spaniel at 3 years old— "She has the Blenheim spot on the top of her head. Her favorite things to do are kiss, cuddle and go on runs with our other dog Raven, an Australian Shepherd." A Blenheim spot is a spot in the middle of the crown of the head. It is also sometimes called "the kiss of Buddha" or "Kissing Spot."

The Cavalier King Charles Spaniel is a well-proportioned little dog. The head is slightly rounded, the muzzle full, tapering a little with a shallow stop. The nose is black. The teeth meet in a scissors bite. The dark brown eyes are round and set well apart with dark eye rims. The long ears are set high with abundant feathering. The topline is level. The tail is sometimes docked by 1/3, but is usually left natural. Dewclaws may be removed. The silky coat is medium in length with feathering on the ears, chest, legs and the tail. Colors include tricolor, black and tan, blenheim (red and white) and ruby (rich mahogany red).

The Cavalier King Charles Spaniel is an eager, affectionate and happy dog, always seeming to be wagging its tail. Outgoing and sportive, these fearless lively little dogs are eager and willing to please. They are intelligent enough to understand what you want and therefore are usually easy to train and respond well to gentle obedience training. They are said to be naturally well behaved and get along well with other dogs and non-canine pets. Cavaliers love people, enjoy companionship, and need rules to follow and limits to what they are allowed to do. They are not suited to kennel life and should not be left alone all day. If you do need to leave them, be sure to take them for a pack walk before you leave to put them in a natural rest mode. Do to their hunting background they have an instinct to chase. Do not allow this sweet dog to develop Small Dog Syndrome, human-induced behaviors where the dog thinks he is pack leader to humans. This can cause a varying degree of behavior problems, which are not Cavalier traits, but are brought on by the way they are being treated. They are recommended with older considerate children, simply because most small dogs are treated in such a way they start to believe they rule the home. In addition to being the dog's leader, socialize well to avoid them being reserved with strangers. The Cavalier King Charles Spaniel is a pleasant companion dog. They have remarkable eyesight and sense of smell and can be used in short hunts in open country. They do well in competitive obedience.

Cavalier King Charles Spaniels are good for apartment life. They are moderately active indoors and a small yard will be sufficient. The Cavalier does not do well in very warm conditions.

Cavalier King Charles Spaniels need a daily walk. Play will take care of a lot of their exercise needs, however, as with all breeds, play will not fulfill their primal instinct to walk. Dogs that do not get to go on daily walks are more likely to display behavior problems. They will also enjoy a good romp in a safe open area off-lead, such as a large, fenced-in yard.

Comb or brush with a firm bristle brush, and bathe or dry shampoo as necessary. The hair between the pads on the feet needs to be trimmed. Prone to tangling and matting on the ears, and should be brushed often. Clean the inside of the ears regularly. Always make sure the dog is thoroughly dry and warm after a bath. Check the eyes carefully for any signs of infection. This breed is an average shedder. 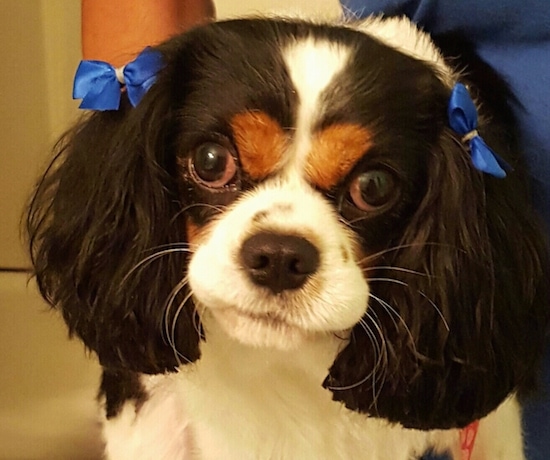 Paris the tricolor Cavalier King Charles Spaniel at 2 years old—"Paris is a very loving dog. No one is a stranger to her. She enjoys playing with children and running around the back yard. Her favorite sleeping toy is a lamb, which she received as a Christmas present." 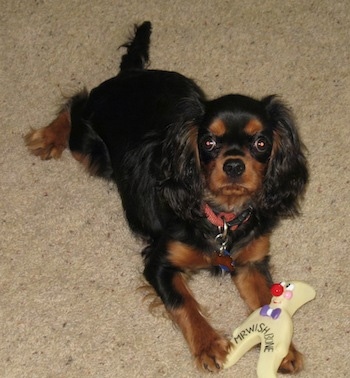 Boz the Cavalier King Charles Spaniel at 7 months old—"This is Boz carrying around his favorite toy when he was a puppy. Boz is now an adult and is such a great companion. Boz enjoys going for walks and going for car rides. But above all, his favorite thing to do is to meet humans! He isn't really fond of other dogs, except for the other 3 dogs we have. When Boz was a little over a year old, we got a Shih Tzu, Molly, because we noticed Boz wanted a friend to play with. He couldn't have been happier! Boz is a great cuddler and a very loyal companion." 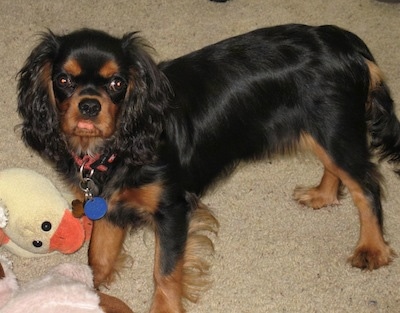 Boz the Cavalier King Charles Spaniel at 7 months old—"This is Boz carrying a treat in his mouth." 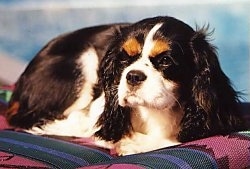 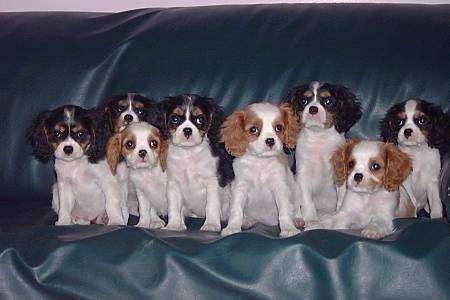 This is Charlemagne and his litter of 7 brothers and sisters. Charlemagne is the first pup on the left. 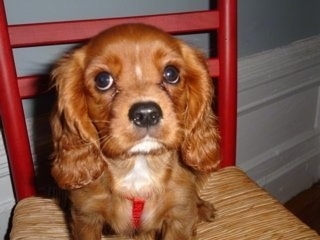 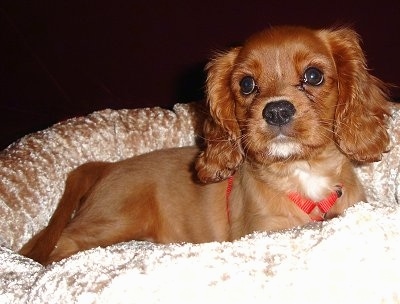 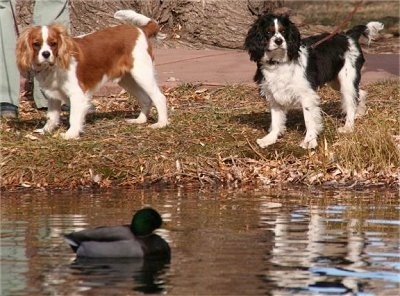 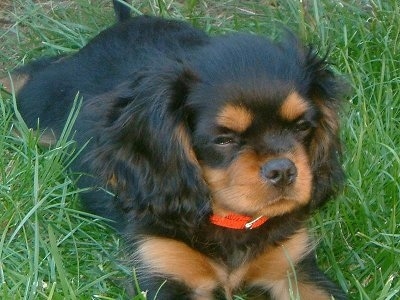 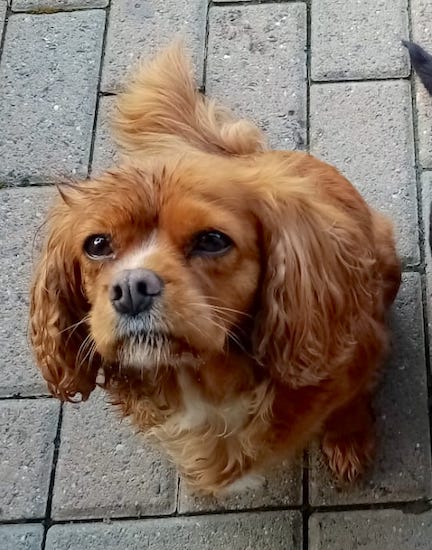