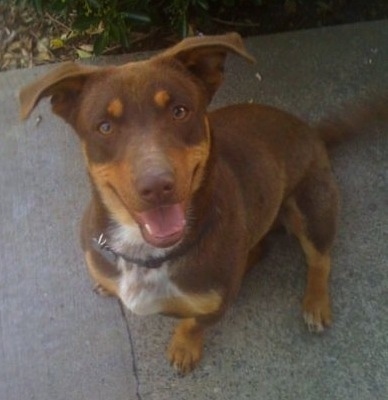 "Pictured is our family's two-year-old Dobie-Basset, Jack. His bark is loud and he is not afraid of the big dogs, even though he is the same size as a Basset. He gets a lot of attention, goes for walks, and still has a lot of energy. He benefits from food- and treat-stuffed dog toys to keep him busy and deter aggressive chewing. He is well balanced as a canine and is good with children."

The Dobie-Basset is not a purebred dog. It is a cross between the Doberman Pinscher and the Basset Hound. The best way to determine the temperament of a mixed breed is to look up all breeds in the cross and know you can get any combination of any of the characteristics found in either breed. Not all of these designer hybrid dogs being bred are 50% purebred to 50% purebred. It is very common for breeders to breed multi-generation crosses. 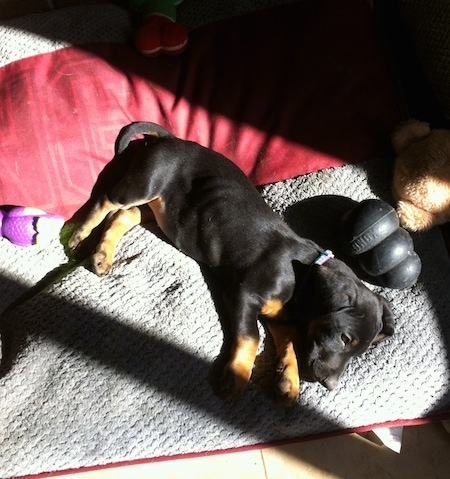 Cheyenne the Basset Hound / Doberman Pinscher mix (Dobie-Basset) as a puppy at 4 weeks old— "This is our little Cheyenne. We adopted her from My Fairy Dawg Mother Hound Rescue, Inc. Cheyenne and her litter mates were found in a cardboard box next to a dumpster in 31 degree weather. Their eyes were just beginning to open, so the vet said they were about two weeks old when found. She was on puppy formula and puppy kibble until she was almost three months old. Some of Cheyenne's litter mates hadn't survived the freezing cold and an exposure to parvo, so I was a bit paranoid and kept her on it longer. " 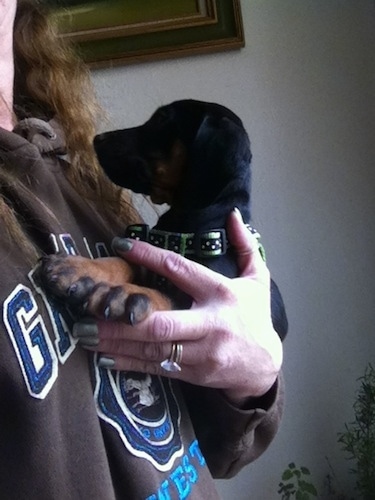 Cheyenne the Basset Hound / Doberman Pinscher mix (Dobie-Basset) as a puppy— "One of the other adoptive parents had a DNA test done on their puppy, her brother, Seamus, because they already had a Dachshund and he quickly out grew him and it came back as a Basset and Doberman mix."

Cheyenne the Basset Hound / Doberman Pinscher mix (Dobie-Basset) as a puppy— "She weighs 54.9 pounds at the age of eight months. She looks like a Doberman but with the shorter legs, not as short as the normal Basset legs and has the longer body of the Basset. She has a great personality. She's very loving, can be goofy and loves to play with her brother, Bo (Foxhound) and our cat Abbigail, or just cuddle on the couch with us. Potty training was a bit difficult for awhile, but now she's got it down. She sits by the back door when she needs to go outside. She is crate trained also. She loves to chew my shoes still, the TV remotes, cell phones and anything else that is left around the house that she knows she shouldn't chew on. We take away the article she has and replace it with one of her toys instead." 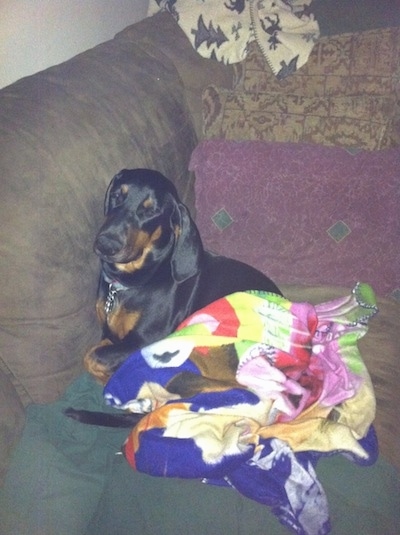 Cheyenne the Basset Hound / Doberman Pinscher mix (Dobie-Basset) as a puppy at about 8 months old— "She sits, comes and we've been working on stay, off, down and lay. She can be a bit stubborn, but she'll get it eventually. We have been reading and using some of Cesar Millan's, The Dog Whisperer's techniques with her. She loves going for car rides and walks and she does great off leash at the dog park. She stays right with me, never straying to far away. She loves playing with the other dogs." 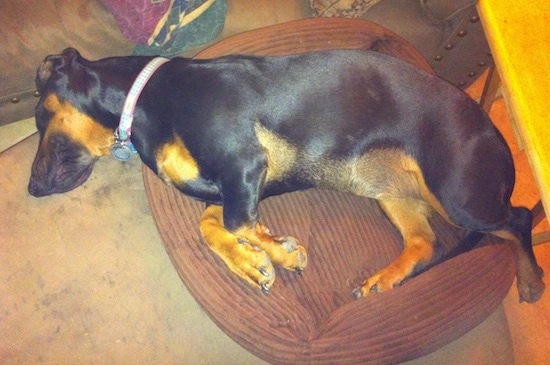 Cheyenne the Basset Hound / Doberman Pinscher mix (Dobie-Basset) as a puppy at about 8 months old— "Cheyenne loves to play in water. Unfortunately she can't or hasn't figured out how to swim yet. She sinks like a rock, which is very scary for me, so I avoid that part of the dog park with her. She is such a wonderful addition to our family. She's very awesome with our grandchildren who range in age from 2 years old to 11 years old, and we wouldn't trade her for anything! She's definitely a Mama's girl! It is going to be interesting to see how big (tall) she gets and how much she will eventually weigh when she is full grown. Her legs are straight and don't have the turned out feet some Bassets have."