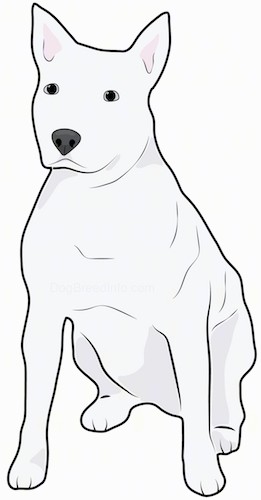 Most English White Terriers were white and weighted around 14 pounds or less. They had thin, tall legs compared to their bodies and had a thin, medium sized tail. Their snout was long for the size of the dog and was slightly smaller toward its nose. Their eyes tended to be wider apart than most and the ears were different on each dog. Some had straight ears while others fell down the sides on their heads. The standard look for this dog had straight ears so most were cropped into a triangle on top of their head. Although this dog did come in a variety of colors such as brown, brindle, black, and with various color markings, the breeders got rid of these dogs. The only dogs that were truly English White Terriers were white with thin coats, similar to other terrier breeds.

English White Terrier was both loyal and loving towards its pack or family. This breed was a more relaxed type of dog compared to other terrier breeds. They would still kill small rodents with eagerness but they also had a gentle side. Many owners said that it was hard to train them because of their lack of intelligence although their unwillingness to train may have been because many English White Terriers were often deaf. These dogs were calm and preferred staying indoors sleeping or being pet by their owners than working outdoors.

These dogs tended to be quite lazy and loved cuddling with their owners. They would have done well in either a house or an apartment. Keep in mind that every dog needs a walk in order to live a healthy and balanced life.

These dogs would have needed a daily walk like any other dog, although most would have been fine with a small yard or no yard at all. They were willing to work outdoors when told to but they would have rather been indoors relaxing. Some were animal aggressive and were eager to hunt small rodents outdoors although they were known to be a less demanding dog than other terriers.

There are no records of the English White Terrier life span although it was probably anywhere between 10–16 years.

There are no records of the English White Terrier litter size although it was probably around 3–5 puppies.

This dog had a short, smooth coat and only needed to be brushed occasionally and bathed when needed.

The English White Terrier wasn’t known until the 19th century although the terrier group has been around longer than almost any other dog breed. The first mention of terriers in written language was in 1440 in the Oxford English Dictionary. The word terrier is a french term that means “Chien Terre” which translates back to “Earth or Ground Dog”. Terriers were known for finding and hunting small mammals out of underneath the earth.

Since terriers have been around for so long, not much is known about how they were bred but most experts agree that they originated in the British Isles. Some theories say that terriers were originally related to breeds such as the Scottish Deerhound, Irish Wolfhound, Canis Segusius, or a cross between Beagles or Harriers with scent hounds. No one knows whether terriers originated with the Celts or perhaps before the Celtic people.

Terrier groups were extremely popular in England, especially with farmers because they would chase and hunt small animals that were known to eat the farmers crops. Many of these small rodents that they would hunt include mice, rats, foxes, and rabbits.

Terriers were specifically bred as working dogs because at this time in history not many people could afford dogs as companion dogs. This means they were not bred for appearance or temperament. As they were bred over time, they became more aggressive. This is partly because the submissive terriers were killed and only the strong dogs would survive. As a test, farmers would put the terriers in a barrel with an animal such as a an otter or a beaver and they were forced to fight. If the terrier survived and killed the otter or beaver, this would be a sign of its strength and willingness to work for the farmer.

Terriers were bred locally in various locations, resulting in a different terrier breed in each city or town. England bred terriers that were smaller with short legs, a longer body, and had both wiry coats and smooth coats. Scottish terrier breeds usually had wiry coats with long bodies and short legs while Irish terrier breeds were usually larger with longer legs and a softer coat that were trained to herd livestock.

Terriers were more popular among the lower class common folk in Britain because they were used to hunt small rodents and animals that the nobility didn’t want. After a while, larger animal hunting became scarce and required small animals to supplement their food source. Because of this, fox hunting became a popular sport. They primarily used a new breed of dog called the Foxhound at first but then realized these dogs were not small enough to follow a fox down its burrow. For this reason, Fox Hunting Terriers became more popular and took over the fox hunting sport. Most of these dogs were smooth coated, taller than other terriers, and were able to follow along side the horses. Over time, terriers began exhibiting coats that were tri colored as well as some that were solid white. Many breeders favored the pure white breeds and bred them exclusively.

English White Terriers were bred as working dogs to hunt small rodents and other small animals but they soon realized that this dog was not the best fit for the job. Most of the English White Terriers were deaf probably because of inbreeding, and they were not as fierce as other hunting dogs, known to sometimes get nervous. By the mid 1800’s, the English White Terrier began to be bred with a cross between the Old English Bulldog and various Terrier breeds. This new breed was known as the Bull Terrier and took traits from both the terrier breeds and the Bull breeds.

The English White Terrier continued to be bred even with its deafness and various other inbreeding health issues. Another common health issue sometimes included nervousness resulting in short tempers. 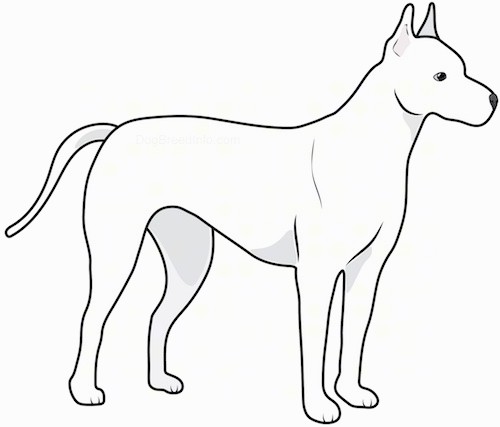