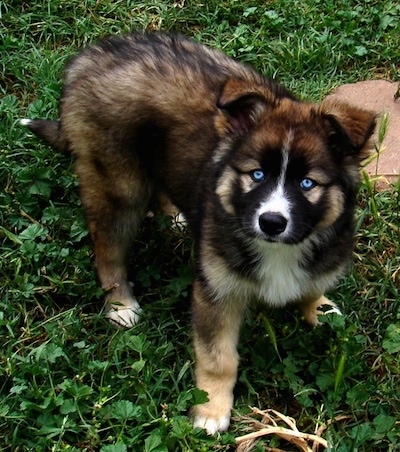 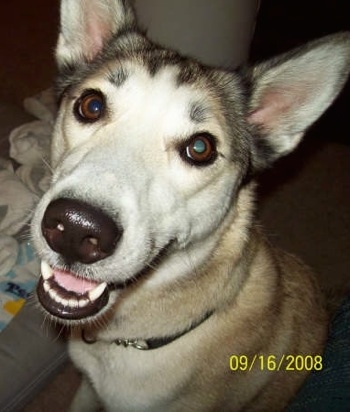 "Sadee Mae came to us from a friend of my mom who has an all-white Siberian Husky. She has always naturally done "sit" but we are still, to this day, working on "down." She likes to lie down and bounce back up like she's on springs. She has so much energy! She loves the field and the tennis courts near our house; and she loves our walks around the neighborhood to see the other dogs (and strut in front of them because they're behind the fence and she's not). She loves to spend time with us, but we can tell she needs a friend because she tries to roughhouse with our cat, Simon, who doesn't run or play back; he just rubs his face on her. We have found a Border Collie / Lab mix that will be able to keep up with her energy and hopefully wear her out because we've tried and failed!" 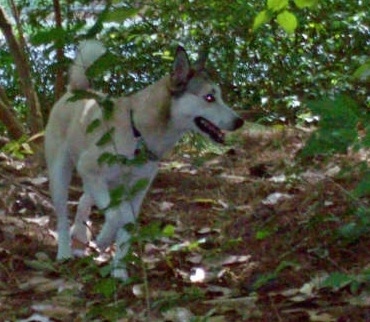 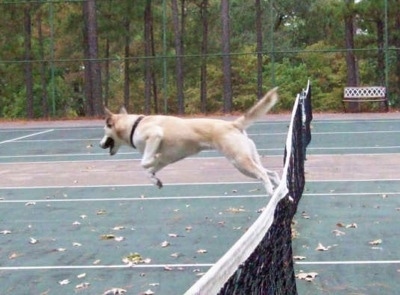 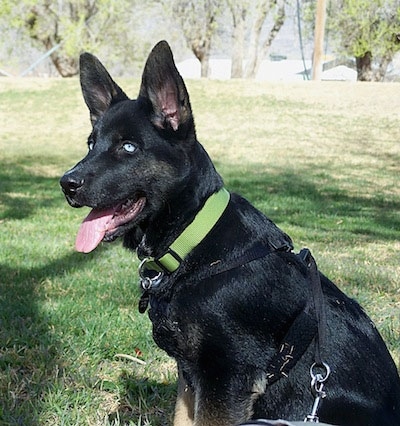 Caelum the Gerberian Shepsky at 1 year old—"My boyfriend and I went to a relatively close town to pick up Caelum (pronounced Ky-Lum; Latin for the word "blue"). He was from a litter of 6 pups, all male. Sadly, before we got there, two pups had died. Caelum had a hard time his first six months. When we got him, we didn't know he had Hookworms. We didn't find out until after his umbilical hernia surgery when he started doing really bad. Thankfully, he is one happy puppy now. Very very hyper. Very loving. He gets along with hismutt pal, Henry." 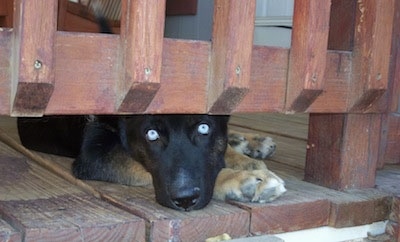 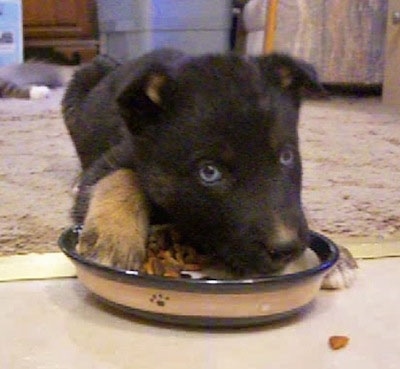 Caelum the Gerberian Shepsky as a puppy 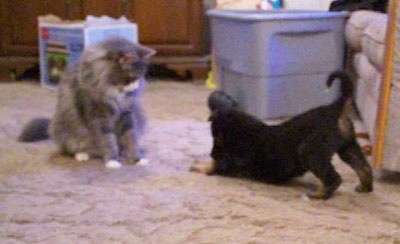 Caelum the Gerberian Shepsky as a puppy checking out the cat Meeka the Gerberian Shepsky as a puppy at 6 months old—"I have watched the Dog Whisperer, and many of his methods had helped me a few years ago, and did educate me a lot more on reading canine behavior. We have 4 dogs, 3 males (2 Neutered 1 intact -show dog) and 1 female (spayed) and we have an established “pack” order. In fact with what I had learned form Ceasar Millan, we had an extremely smooth transition when I intorduced my new born son to my dogs, compared to the introduction of my first child. We apply some of his philosophies, and the ones we had applied have helped us and educated us on canine behavior, and keeping a more balanced and happier dogs. Of course there is always room for improvement, but I am very happy with my pack, and they in return seem the same." 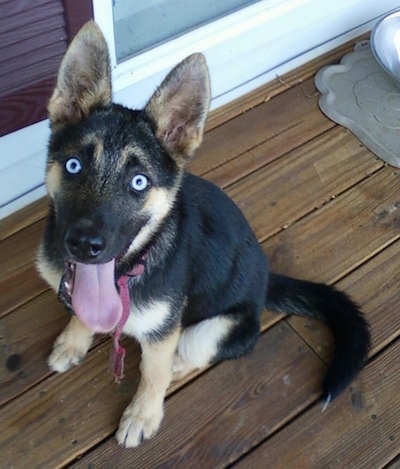 Meeka the Gerberian Shepsky at 6 months old—"We had just lost our Siberian Husky a year before we came across an add in the classifieds for German Shepherd Husky mix puppies. Her father was a German Line bred German Shepherd and mom was a petite red and white husky, both very pretty and all the pups had deep blue eyes! I picked her out because she had the prettiest facial markings and was the easiest to roll over and submissive enough but confident. She's now a querky hyper loving dog. A pure joy and a headache all in one! Love her bunches!" Meeka the Gerberian Shepsky as a puppy at 2 years old—"We got Meeka when she was about 4 weeks old, the people that had her were anxious to get rid of her, they were German Shepherd breeders, and her litter was an accident, they felt it made their establishment look bad. She is a doll, she adores my other dogs, Collie, Boxer and Boston Terrier. She is very good with my children, 1 and 5 years, her gentle disposition with them seems to come naturally for her. She has a lot of stamina, a lot of go and is so much fun to be around - she is my walking buddy, we go for miles! In this picture she is 6 months old and recently spayed. She has the German Shepherd body, tail, feet, and ears, but displays the husky size, legs and head, and of course the eyes! She seems to be a lovely combination of both breeds. At 6 months of age, I believe she is as balanced as a 6 month old puppy can be, I know we still have some obstacles ahead of us, but she has a high drive to please, very submissive to her fellow dog-mates, and extremely gentle with my children." 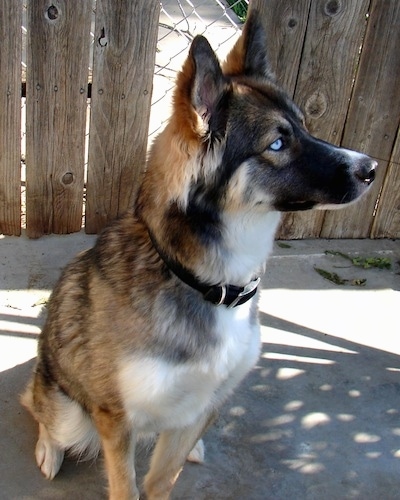 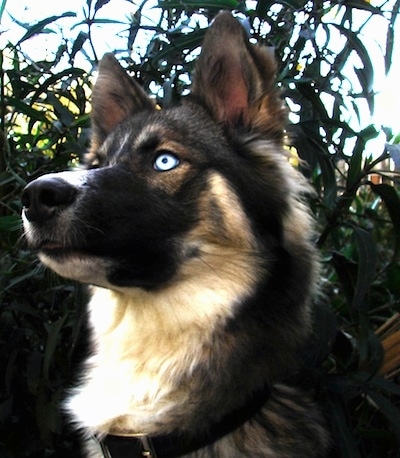 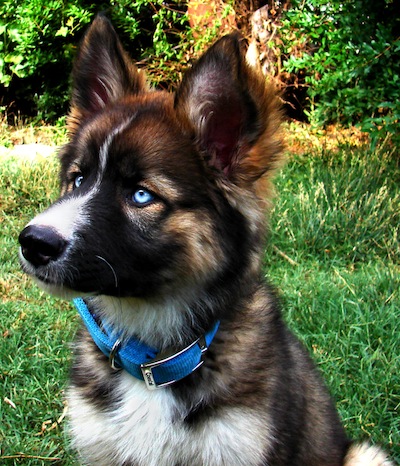 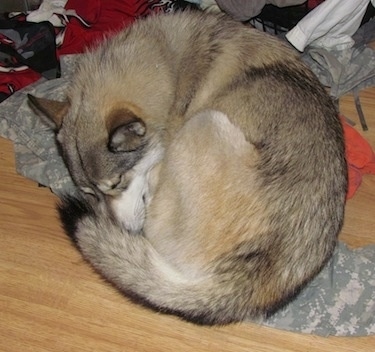 HiXael the Gerberian Shepsky as a puppy at 5 months old 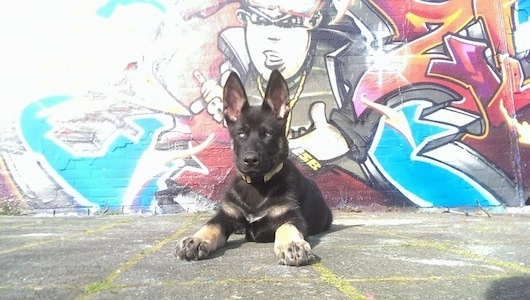 Moro the Gerberian Shepsky as a puppy—"I got Moro from a litter of 6 pups but I've only met one of his brothers. The mother was a Husky and very sweet when we came there. The father is a German Shepherd that we were not able to meet as he was very protective over his pups. Yes, the owners had both the mother and father dog. It was very coincidental that we got Moro. I was looking online for rescue dogs when I saw a 1-year-old Husky/Shepherd mix. I instantly fell in love with it's beauty and charisma, but when I called the shelter home he was already gone. I than looked up other dogs online on the Dutch equivalent of eBay and found Moro and I picked him up the same evening. Till today I haven't found another Gerberian Shepsky litter there. Moro is a very sweet dog. Almost never barks. I almost had to teach him how to do it. He is very social. So far he is not showing dominant signs. I walk around 2 hours a day as he definitely has some of the Husky energy. Most of the time he walks freely and he follows me wherever I go. Only sometimes he gets so caught up in playing with other dogs that I have to go get him. It's nice to see the characters combined. He is watchful around the house but does not express it through barking. He is not very keen on toys. He chooses playing with another dog over a ball or stick anytime. He goes well with every type of dog and is very forgiving. When playing with small dogs he lays down to give them a bit of a fair fight. With larger dogs he loves chasing them, biting them in their neck and paws. When we are in the open field he LOVES to catch mice and moles. Twice he had caught chickens out of the gardens of neighbors and he also loves chasing cats. The cat at home is safe though, he just wants to play with her (but she does not). When he was 12 weeks he fell into a canal nearby and it was only after 10 minutes that I found him. He couldn't climb back on the concrete sides and was in full panicking mode. Last summer I rehabilitated his fear of drowning by buying him a life jacket and doing swim training for a few days straight. Now he loves to swim and return sticks that I throw in. At 9-months-old he weighed almost 40 kilo's (88 pounds)! Yup he's a big fellow! When I walk him on the street he gets A LOT of attention. You can hear everyone talking around you about his bright blue eyes and many people think he is a wolfdog." 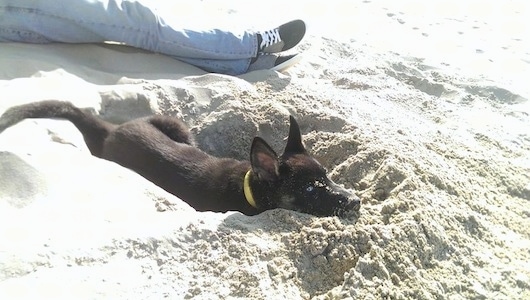 Moro the Gerberian Shepsky as a puppy digging in the sand. Moro the Gerberian Shepsky as a puppy playing at the beach. 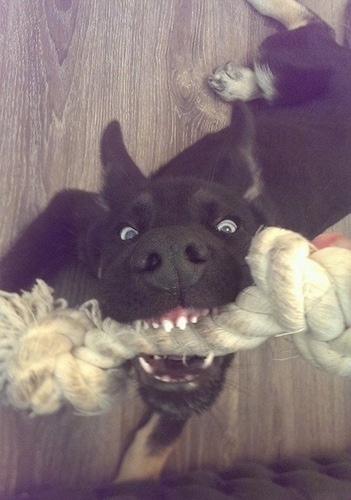 Moro the Gerberian Shepsky as a puppy playing with his rope toy. 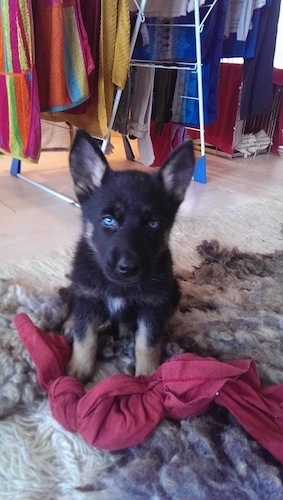 Moro the Gerberian Shepsky as a young puppy