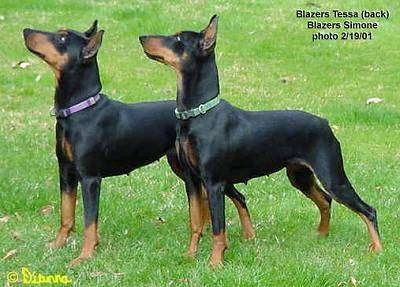 The German Pinscher, also called the Standard Pinscher, is a medium-sized, tall terrier. The head is shaped like a blunt wedge. The muzzle is the same length as the top of the skull. The stop is slight and the nose and lips are black. The teeth meet in a scissors bite. The oval eyes are medium in size. The symmetrical ears are either cropped or kept natural. When they are cropped they stand erect. When they are uncropped they fold over in a V-shape. In the USA the tail is usually docked between the second and third joint. Note: cropping ears is illegal in most parts of Europe. Dewclaws are sometimes removed. The strong, smooth, glossy coat comes in red fawn, black and tan, and dark brown with yellow markings. Black with tan markings is the most common.

The German Pinscher can be an ideal companion dog. This rare breed is brave, not squeamish, sober, and has considerable stamina. It is lively but docile, quite versatile, and a vocal guard dog. It responds to obedience training. If it senses the humans around it are meek or passive it will become bull-headed and stubborn. This breed needs to clearly know who is boss. Proper human to canine communication is essential. This breed only barks when it feels it is necessary, which may be often. Visitors will be announced with loud barking but then things usually calm down quickly. If the dog does not stop barking owners need to tell the dog enough is enough and to quiet down. The German Pinscher needs to know it owns nothing and is clearly a subordinate of humans or owners will have a very hard time with it. Children need to know how to display proper pack leader skills. If the dog thinks its humans are in trouble it will instinctively protect and will bite first without thinking about it. Like other pinschers and terriers, this breed does not back away from dominance challenges with other dogs, and needs firm handling to control its fighting tendencies through proper communication. German Pinchers are very loyal and protective. They will defend their territory, handler, and the family to the end against those intent upon harm. Without proper leadership they can also get protective of their own things like their bones, a chair or their food. The owner needs to set the guidelines and let the dog know it cannot growl at them or other humans. The dog must be taught that it is not "Top Dog". It needs to know its place in the house. Normally they get along well with other household pets. However, they are ratters and when outdoors they will chase a cat, possibly hurting it. This breed requires a firm hand from an experienced dog owner so it doesn't grow up to take over the whole house.

The German Pinscher will do okay in an apartment if it is sufficiently exercised. It should have a tightly fenced-in yard. This breed will run off chasing anything that moves quickly.

The German Pinscher requires a lot of exercise. This breed needs to be taken on a daily, brisk, long walk or jog where the dog is made to heel beside or behind the person holding the lead, as instinct tells a dog the leader leads the way and that leader needs to be the human. They will enjoy running alongside you when you bicycle, playing in the yard, or a walk around the block.

The strong, smooth, glossy coat requires little grooming. An occasional brushing to remove dead hair is all that is needed. This breed is an average shedder.

The German Pinscher was officially recognized in Germany in 1879 and has been protected and promoted since 1894 by the German Pinscher Schnauzer Club. During the years around the turn of the century, both smooth pinscher and coarse-haired schnauzer pups appeared in the same litters. The club initiated a policy requiring proof of three generations of pure smooth coats for registration. This quickly helped set type and made them a distinct breed from the Schnauzer. The German Pinscher played a role in the development of the Doberman and the Miniature Pinscher. The German Pinscher was recognized by the AKC in 2003. It has been used on farms as a vermin destroyer, herding livestock, watchdog, guard dog and family pet.

Terrier; the Kennel Club of Britain includes the German Pinscher the Working group. 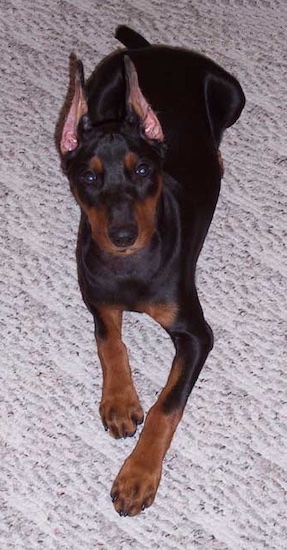 Caicos the German Pinscher as a puppy at 4 months old 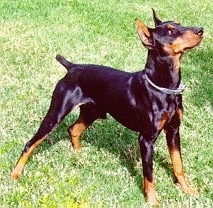 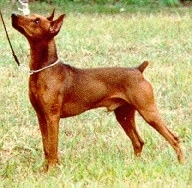 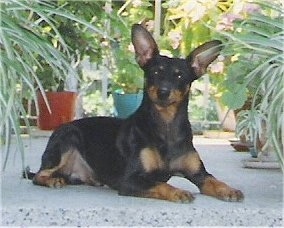 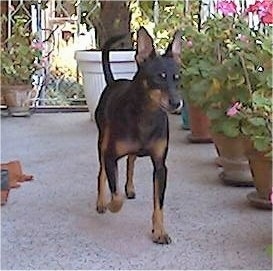