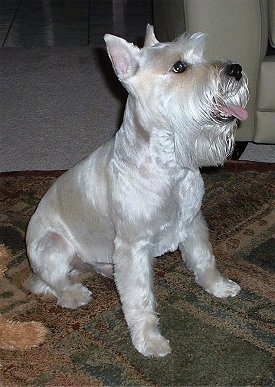 Duc the Mini Schnauzer at 5 years old— "Duc is a 5-year-old Mini Schnauzer. He is listed as salt and pepper but we are hard pressed to find the pepper! We say he is "blonde" but smarter! He was trained not to bark, so when he does we pay attention; there may be something wrong. He loves to play with his toys and frequently plays all by himself. He is very curious and loving, likes to be close to us and know where we are at all times. He loves people, but tends to get cautious when meeting new people. He evaluates dogs on a case-by-case basis and determines if they will be friends or foes. He has big-dog syndrome!"

The Miniature Schnauzer is a small, sturdily built dog. The body is square and in proportion. The strong head is rectangular in shape. The width of the head gets slightly smaller from the ears to the eyes. The muzzle is strong and ends rather bluntly. The nose is black. The bite is scissors. The deep-set, small eyes are dark brown in color. Ears set high on the head are often cropped to a point. When the ears are left natural they are small and V-shaped, folding close to the head. The front legs are straight. The docked tail is set high and carried erect. The tail is cropped just long enough so that it can be seen over the backline of the dog. Note: it is illegal to crop or dock a dog’s ears or tail in most parts of Europe. The Mini Schnauzer has a double coat. The outer coat is wiry and the undercoat is soft. The coat is clipped so it has a bushy beard, mustache and eyebrows. Coat colors include black, white, salt and pepper, and black and silver.

The Miniature Schnauzer is an intelligent, loving, happy dog. It is energetic, playful, gets along well with children and likes to be with its people. Affectionate, keen, devoted and docile. With proper leadership it can get along with other dogs. Socialize this breed well. It makes a good companion and family pet. The Mini Schnauzer will not listen if it senses it is stronger minded than its owner. Owners need to be calm, but firm, possessing a natural air of authority. These dogs do not have a yappy bark, but rather they make sounds like a low, carried-out howl of a voice. This breed makes a good watchdog and vermin hunter. An easy dog to travel with. Some can be reserved with strangers if the humans do not provide stability in their lives, but most love everyone. Do not allow this little dog to develop Small Dog Syndrome, human induced behaviors where the dog runs the home. This can cause a varying degree of behavior problems, including, but not limited to separation anxiety, being willful, nervous, barky, guarding, bold, sometimes temperamental, and not hesitating to attack much bigger dogs. A well-balanced dog that gets enough mental and physical exercise will have a totally different personality. These are not Miniature Schnauzer traits, but rather behaviors brought on by the way the dog is treated by the people around them. It is all up to the humans. As soon as the humans start being true pack leaders, the dog’s behavior will change for the better.

The Miniature Schnauzer is a good dog for apartment life and will be calm indoors so long as it gets enough exercise.

These energetic little dogs need daily, long, brisk, walks or jogs, and love play sessions off the leash. While out on the walk the dog must be made to heel beside or behind the person holding the lead, as in a dog's mind the leader leads the way, and that leader needs to be the human. Dogs that do not get to go on daily walks are more likely to display behavior problems. Teach them to enter and exit door and gateways after the humans.

About 15 years. It shows no signs of age until quite late in life.

The wiry coat is not hard to groom, although it does need attention. Comb and brush daily with a short wire brush to prevent matting. If any mats appear they should be cut out. They should be clipped all over to an even length twice a year, in spring and fall. Trim around the eyes and ears with blunt-nosed scissors and clean the whiskers after meals. On pet dogs the coat is usually clipped short on the upper body and left somewhat longer on the under-parts, legs and head. Show dogs need to be hand stripped and trimmed instead of clipping. This breed sheds little to no hair and is a good dog for allergy sufferers.

The Miniature Schnauzer is a German breed. During the years around the turn of the century, both smooth German Pinscher and coarse-haired Schnauzer pups appeared in the same litters. The German Pinscher Schnauzer Club initiated a policy requiring proof of three generations of pure coarse-haired Schnauzer coats for registration. This quickly helped set type and made them a distinct breed from the German Pinscher. These Schnauzers were given the name Standard Schnauzer. Miniature Schnauzers were developed by crossing small Standard Schnauzers with the Affenpinscher and possibly the Poodle. The Schnauzer name derived from the German word "Schnauze," which means "muzzle." It was used as a ratter and still retains the ability, but is mostly a companion dog today. Some of the Schnauzer's talents include: hunting, tracking, ratter, watchdog, competitive obedience and performing tricks. 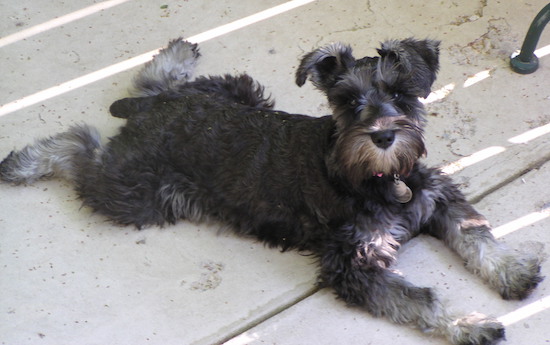 Greta the Miniature Schnauzer at 7 months old—"So far, she's a bit big for a mini. She is already 19 pounds and quite tall. Greta is an eager dog and is very clicker savvy. So far she has learned to sit, down, spin on the spot, give kisses, ring the bell to go outside, shake a paw, and speak. My next goal is to teach her "quiet", as she is very fond of barking in the back yard. She seems to think she is a ferocious guard dog. Greta enjoys the off-leash dog park and has many friends out there. Next summer, I plan to enroll the both of us in agility training. I think Greta will do splendid!" 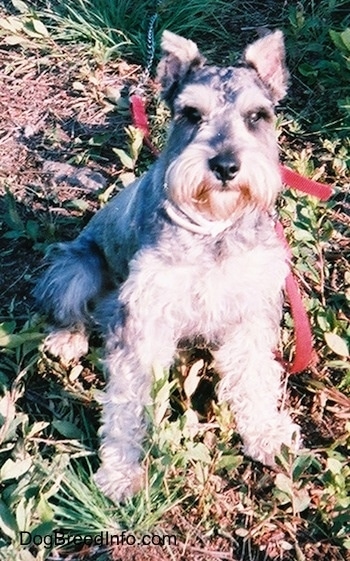 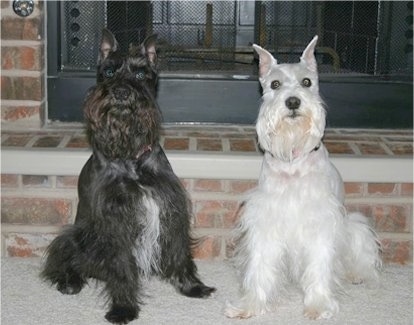 Buba and Boomer the Mini Schnauzers 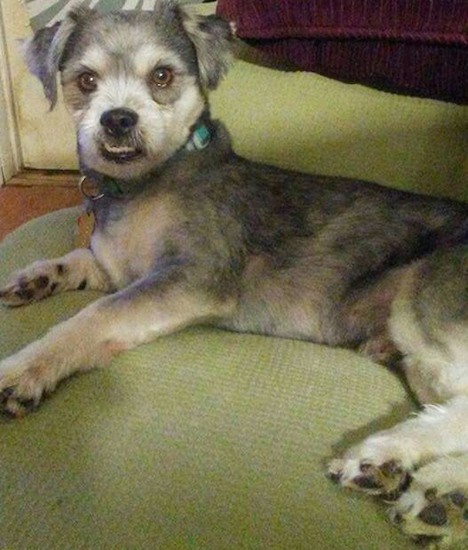 Joseph Dale (Joey) the Miniature Schnauzer at 4 years old—"A friend lost her apartment and asked us to keep him till she could find another apartment. He came to us full of knots! We clipped him and gave him a real short haircut. After about a year she got an apartment but she couldn't afford the extra money to keep the dog so she said we take better care of him then she did so keep him. We got him neutered and checked at the vet. It turns out that he has skin allergies and the vet told us to give him a Benadryl in the AM and PM. We keep him short so we can tell if he's been scratching or licking. His ears were never clipped and his tail wasn't docked but we like him better this way." 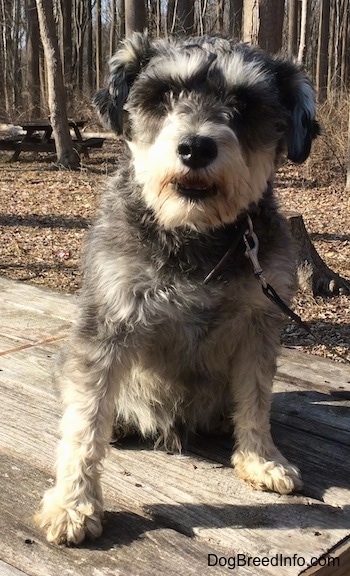 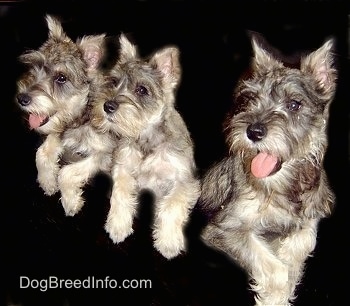 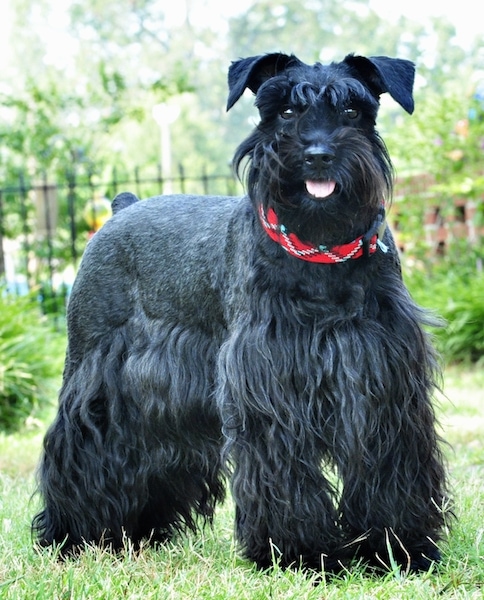 "Hi, My name is SGT Wynston! I'm a black Miniature Schnauzer and I just turned 4 years old. I guess you could say I'm a traveling dog, I have visited KY, TN, GA, FL and Key West just to name a few! I love to ride in the car, talk walks, play with my toys and dance for my treats! My master tells me everyday how smart I am ;-) If you ask me I'm really not a dog at all, I'm a 4 legged human... bark bark!!"