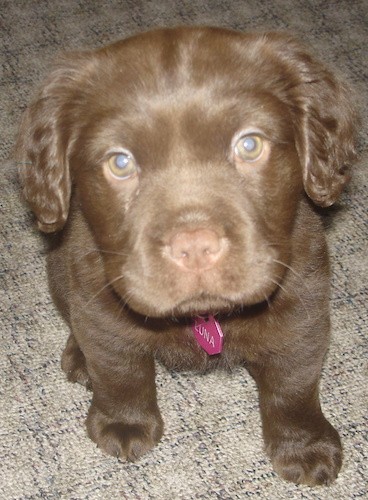 "This is Luna as a 4-month-old puppy. She is a Cocker Spaniel and Shar Pei mix. We got her when she was 7 weeks old. She was calmer than most puppies at first. Once she got home and settled in, she became more rambunctious. She is a great pup. She is very loyal and has attached well to each member of our family. We usually don’t keep her on a leash but recently put up an invisible fence because she is part Cocker Spaniel which is a gaming dog. She will chase anything from rabbits and birds to butterflies and gnats. She doesn’t bark much unless she is really wound up or hears someone at the door when we are all home. She does nip a bit but we have been working with her on that. She has been easy to train as far as house training and learning commands. She can sit, shake and lay down. Although she has been in our home for a few months, she still chases our cat. She was 7.0 lbs at her 1st vet appt and 12.9 3 weeks later. She is expected to be 30-35 lbs when full grown. She has a very soft coat which feels similar to a cat. We have not had to do anything in particular with her grooming other than bathing, cleaning ears and nail clipping. Her mother was Shar Pei and father was the Cocker Spaniel. She is a very cute and lovable puppy. She would not be happy to be alone too often. She is very good with strangers and people of all ages."