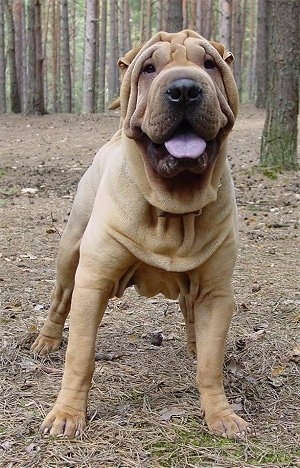 The Chinese Shar-Pei is a large dog with wrinkled skin. It has a square profile with a broad, flat head. The muzzle is wide, padded and full, with a moderate stop. Like the Chow Chow, these dogs have a blue-black tongue. The teeth meet in a scissors bite. The small, sunken, almond-shaped eyes are dark, but may be lighter in dogs with a dilute colored coat. The high-set, triangular ears are very small and slightly rounded at the tips. The tail is thick at the base, tapering to a fine point and set extremely high. The dewclaws are sometimes removed. Both heavily wrinkled dogs with large heads and smaller-headed dogs with tighter-looking skin occur in this breed. Puppies have more wrinkles than adults. Shar-Pei slowly lose their wrinkles as they get older. There are three coat varieties: horse-coat, brush-coat and a rare bear-coat, which is not recognized by the AKC. The bear-coat does not fall within AKC standard because this particular Shar-Pei has an undercoat and a topcoat exceeding 1 inch. The popular theory about the bear-coat is that it's a "throwback" to the Chow-Chow. They are actually quite popular as pet quality Shar-Pei, albeit rare, and often confused with the Chow by unknowing owners as well as animal shelter workers. The unusual horse-coat is rough to the touch, extremely prickly and off-standing. The brush-coated variety has longer hair and a smoother feel. The coat on all varieties can be up to one inch in length. Coat colors include all solid colors and sables. There is also a lowered, spotted and a parti colored (flowered) Shar-Pei coat, which is a disqualifying fault in the show ring according to AKC standard.

The Shar-Pei is very loyal to its handler. Intelligent playful, active, dominant, and brave, It bonds with its family, but is not unfriendly toward strangers. If the dog meets cats and children while it is still young, it usually will not have a problem with them. The Chinese Shar-Pei is easy-going, calm, independent and devoted. It makes a delightful companion and a good watchdog. The Shar-Pei needs a confident handler. If you are uncertain, inconsistent, too soft or mild in the dog's eyes, it will take over as the boss. The Shar-Pei needs a firm, but gentle, extremely consistent authority figure. The dog must be taught all humans are above him in the pecking order. Those who see themselves as above humans will be stubborn and bold. This breed needs firm obedience training to establish your leadership. They may refuse commands from family members who have not established leadership over them. They need an owner who has the ability to be a leader. The Shar-Pei is generally not fond of water and often tries to avoid it. This breed is very clean and one of the easier breeds to housebreak. Mixing other dogs can sometimes be a problem if one of the dogs is displaying dominant behaviors. Socialization is important. However, some Shar-Pei are less dominant then others and show lines tend to be less dog-aggressive, mixing well with other dogs. Some Shar-Pei tend to slobber, especially when in pain. It is important to find a reputable breeder when seeking a Shar-Pei. This breed was very popular in the 1980s. It was referred to as one of the "Yuppie Puppies," meaning it was one of the breeds that were carelessly over-bred. The dog's temperament depends on how the owner treats the dog. Dogs that are allowed to believe they are the boss over humans will develop behavior issues. Dogs that are not taken for daily pack walks will also begin to display a varying degree of issues.

Prone to kidney failure (amolydosis) which causes a fever and swollen hocks syndrome. One misconception is that the Shar-Pei have skin problems due to their wrinkles. Yes, some Shar-Pei have skin problems, but it is not because the dog has wrinkles, but rather a hereditary condition. Due to over popularity in the 1980s, some Shar-Pei do have hereditary skin problems. However, if you buy from a reputable breeder, this condition should not be a problem. Prone to mast cell tumors. Be sure to find a breeder who strives for healthy dogs.

The Chinese Shar-Pei will do okay in an apartment if it is sufficiently exercised. It is moderately active indoors and will do okay without a yard.

The Shar-Pei is sensitive to warm weather, partly due to the wrinkles on its head holding in the heat.

On hot days shade should always be provided. Water should be available at all times. Provided they get enough exercise, they will be very peaceful indoors.

The Chinese Shar-Pei has a considerable need for exercise, which includes a daily walk. While out on the walk, the dog must be made to heel beside or behind the person holding the lead, as in a dog's mind the leader leads the way, and that leader needs to be the human. Do not over exercise them in the heat, as they are sensitive to it.

The Shar-Pei should be brushed regularly. Their coat is never trimmed. This breed does not have an undercoat. The "bush" coat sheds a little year round, but the "horse" coat tends to shed only during molting periods. Molting may leave the dog looking unkempt. Bathing about once a week and brushing the coat daily during this period will remove the old dead hair and allow the new coat to grow in. The harsh coat can sometimes cause a problem with people who are prone to allergies.

The ancestry of the Shar-Pei is uncertain. Pictures on pottery suggest the breed had existed even as far back as 206 BC. It may be a descendant of the Chow Chow; however, the only clear link between the two breeds is the purple tongue. The name "Shar-Pei" means sandy coat. The dogs were used as multipurpose working farm dogs for the Chinese, hunting, tracking, as a ratter, herding, protecting stock, and guarding the home and family. The dogs happily worked all day long. It was also used in dog fighting events where the loose skin and extremely prickly coat made it hard for the other dog to grab onto. The Chinese believed that the image of the wrinkles and black pigmented mouth would scare off any evil spirits. During the Communist Revolution the Shar-Pei population dwindled. In 1973 a Hong Kong businessman named Matgo Law acquired a few of these dogs in an attempt to save the breed. He attracted people's attention through an American magazine. From those few dogs the Shar-Pei's numbers have risen tremendously and it is now one of the more popular breeds in the USA. The Chinese Shar-Pei was first recognized by the AKC in 1992. The breed has over 70,000 dogs registered as foundation stock. 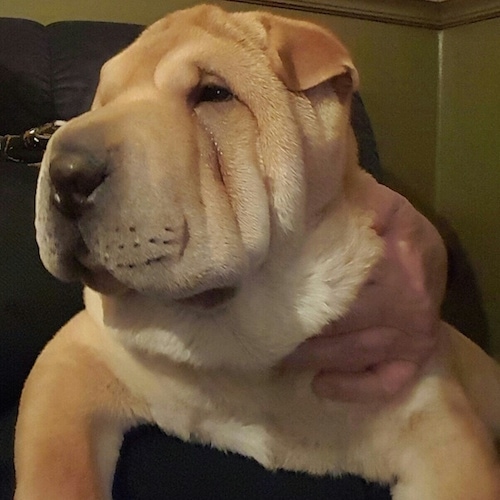 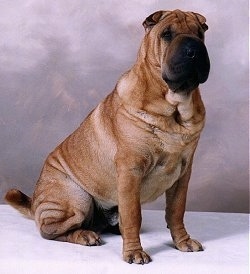 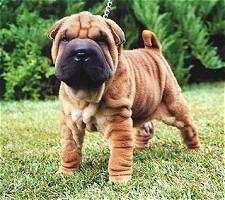 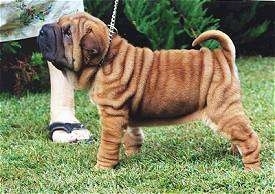 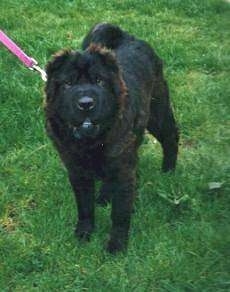 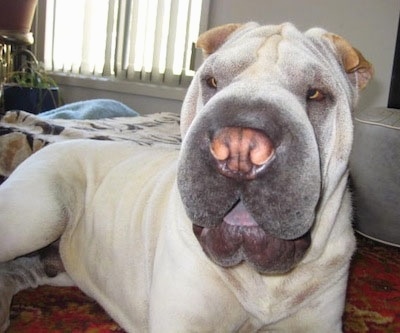 Earl the Shar-Pei at 1 year old—"Earl is disobedient and stubborn, but loyal and loving. This is Earl relaxing. He lives in Australia" 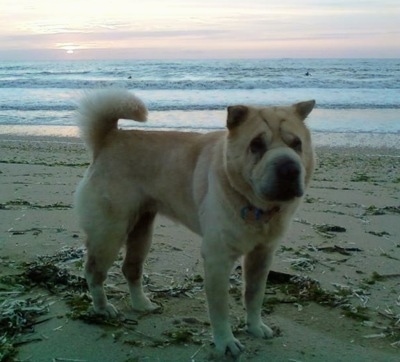 "Miss Maddy Kay is soooooo full of love in both the giving and receiving. Maddy is a rescue dog and has engulfed herself fully in to a new life with me. We have done "mission" work and became involved in the "Read" program at the grade schools and hospitals. Maddy loves kids and chasing butterflies. She is a unique creature—there are two cockatiels in the house that she has been trained to interact kindly with as well as two previous doves." 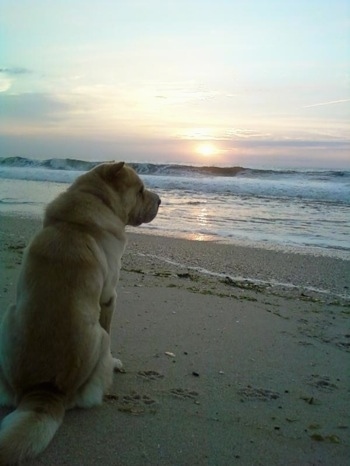 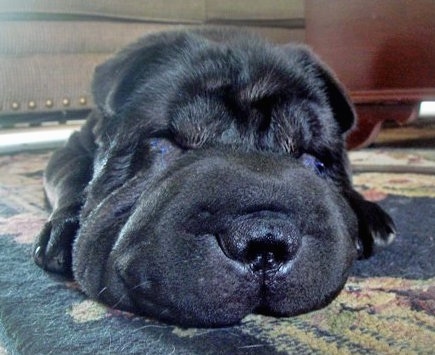 "Sophie is a black Shar-Pei shown here as a 5 month old puppy. She has a lot of personality and is very opinionated about everything. She likes to chase the two cats we have (and be also be chased by them) and play with her squeak toys. Sophie has a lot of energy but uses the energy in quick bursts so once she's spent, she'll pass out on the cold kitchen floor for an hour. She can be bossy and is very much a little lady and princess, but that doesn't stop her from being extremely loving and affectionate. Sophie even talks with a variety of noises! She's really like a furry little person. After my best friend died from acute leukemia, a chocolate Labrador named Molly, who saved my life after we were both in a bad car accident, I was so completely devastated that I didn't want another dog. Sophie has been the polar opposite of Molly, but I couldn't love her anymore." 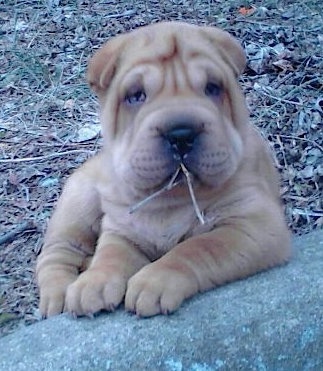 Titus the Chinese Shar Pei puppy at 4 months old— "This is Titus. He is the family dog and when I say family, my mom, dad and my in-laws call him their granddog. He is a wondeful pup. He is very active and loves to run around the football track. I have 4 kids and they are under 10 he is very good around them."