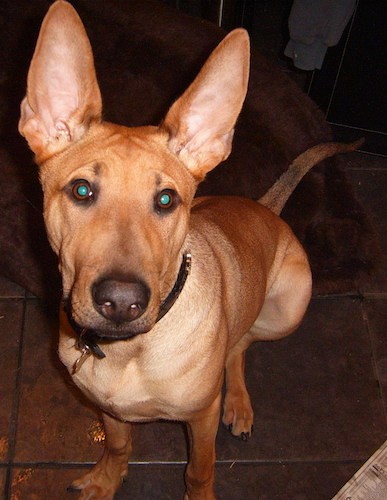 Dave the German Shepherd / Shar Pei mix breed dog at 1 year old—"Dave is very excited and loves other dogs. He will never fight with another dog, even when small ones are hanging off his neck! He starts the fight though as he jumps on them wanting to play but I have never seen him act aggressive towards anyone or anything. He doesn't bark unless he thinks someone is outside, perhaps a very good guard dog but if someone came in the house while I was here he would just jump on them and give them all his toys! At 2 years old he weighs 77 pounds (35kg) and is about 26 inches tall (66 cm)."

The Shepherd Pei is not a purebred dog. It is a cross between the Chinese Shar-Pei and the German Shepherd. The best way to determine the temperament of a mixed breed is to look up all breeds in the cross and know you can get any combination of any of the characteristics found in either breed. Not all of these designer hybrid dogs being bred are 50% purebred to 50% purebred. It is very common for breeders to breed multi-generation crosses. 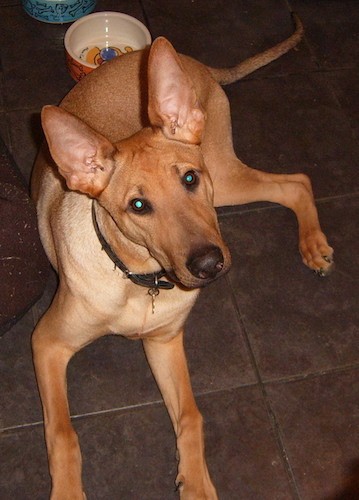 Dave the German Shepherd / Shar Pei mix breed dog at 1 year old—"Dave is very good at training, extremely quick, intelligent and very easy to teach - he has passed his bronze, silver and gold for the Good Citizens Award Kennel Club, but he has a very short attention span and gets bored very easily. He does do as he's told when you tell him. He loves to run, play with other dogs and needs lots of exercise." 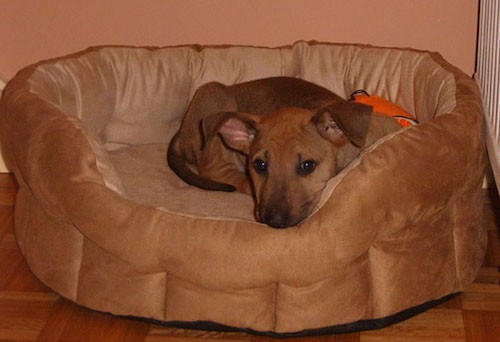 Dave the German Shepherd / Shar Pei mix breed dog as an 8 week old puppy—"Dave is a chewer, has ruined my woodwork in my kitchen and if he finds anything he can get a hold of, like DVD's, computer games, cd's, paper, and especially shoes, he will chew them up. As a puppy he was too excited and wouldn't stay still for longer than 5 minutes, but he has calmed down now. Not completely as he is still excited. He gets on very well with my cats but sometimes he likes to chase them. He had a lot of wrinkles when he was a pup but has lost a lot of them now though he still has them on his forehead. He has the loose skin of a Shar Pei and the horse coat hair. He moults all year round and the hairs are very fine so he needs constant grooming. He is very strong and has the blue tongue of a Shar Pei.

He has a very delicate stomach and can only eat hypoallergenic foods. He can not eat real bones and must eat Rawhide.

The only health problems he has are recurring ear mites. He does not like water but will be bathed when he is told to." 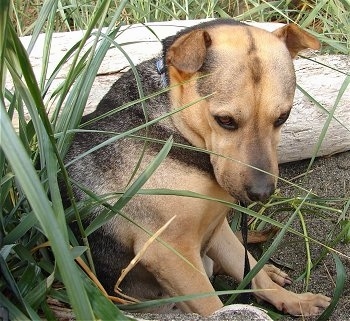 "My family has had 3 Shar Pei mixes thus far—in terms of physical appearance, all of them appear like a mid-sized (Shar Pei-sized) version of the other breed (two were Shepherds, one a Lab). However, they do retain the Shar Pei characteristics of broad shoulders that give them a somewhat bulldoggish stance, and slight wrinkles on the forehead and rear haunches. These were all rescue dogs, and we did not see the Shar Pei parent, but none of our hybrids has the classic Shar Pei ’meat mouth’—they typically have a more Shepherd-like nose and face. Also, our hybrids are all super-shorthairs (a bit shorter than typical shorthaired dogs), and the Shepherd hybrids both retained the classic double-coat of fur (undercoat and overcoat). They appear to shed at irregular intervals, although all shed in the spring, and the undercoat comes out in big clumps over a period of about 2 weeks."

"I really like this hybrid breed, as I am not a personal fan of the Shar Pei ’meat mouth’ appearance, but I LOVE the Shar Pei disposition, which all three of our hybrids share. This includes some unwanted territorial aggressiveness, a hatred of cats, and for our Shepherd hybrids it unfortunately also led to a long-term vendetta with the mailman."

"However, all of these animals were comfortable playing outdoors but equally comfortable indoors during the work-day. Like Shar Pei's, they typically sleep when the family is out of the house, and while all of them received regular daily walks exceeding 1 mile, none of them pressed to go outdoors other than for potty breaks.

"All three of these dogs are very family oriented, and spend their time with family members when we're home. They're also all distinguished by being very intuitive, and very responsive to intuitive gestures and emotive responses—far more so than typical purebred Shepherds or Labs. One of our hybrids growls if disturbed while sleeping at night, but the other two simply groan and go back to sleep."

"We owned these dogs over a 14-year period of time—two have passed on from lymphatic cancer, and the third is now 8 years old but still very enthusiastic, attentive and full of vigor."

"A childhood friend of mine also had two Shar Pei/hound hybrids, and out of these five dogs I would say that as a general rule, if you cross a Shar Pei with another breed, you will end up with a hybrid that retains the Shar Pei's personality but appears like the other breed." 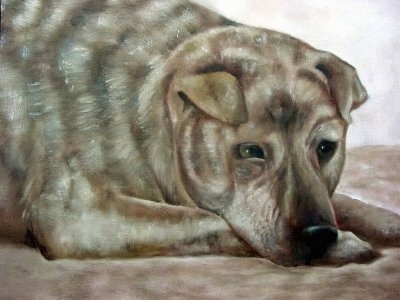