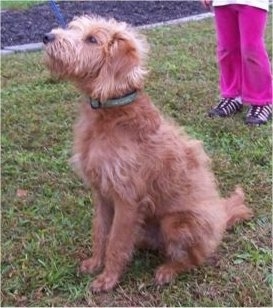 Duncan the Mini Labradoodle at 6 months old—"His fur is deep, dark red and fuzzy. This is as big as he will get. He is about knee height."

The Miniature Labradoodle is not a purebred dog. It is usually a cross between the Labrador Retriever and the Poodle; a Toy, Miniature or a small Standard Poodle. However there are two different ways breeders are breeding the Mini Labradoodle.

1. Some Miniature Labradoodles are being bred as a first cross between a Labrador Retriever and a Miniature Poodle. Some have Toy Labradoodles. These two smaller sizes of Labradoodles are achieved sometimes by surgical insemination or artificial insemination, but not all breeders perform this method of breeding. The resulting puppies may or may not be miniature in size. The theory is that they will be somewhere in between the Miniature Poodle's size and the Labrador Retriever's size.

The best way to determine the temperament of a mixed breed is to look up all breeds in the cross and know you can get any combination of any of the characteristics found in any breed. Ask the breeder you contact which method of breeding they used to produce the Mini Labradoodle. Not all of these designer hybrid dogs being bred are 50% purebred to 50% purebred. It is very common for breeders to breed multi-generation crosses.

There are a few different ways breeders are producing Labradoodles.

F1 = 50% Labrador and 50% Poodle: This is Lab to Poodle cross; this is first generation, resulting in healthier offspring! Hair type can be smooth like a Lab, wiry like an Irish Wolfhound or wavy/shaggy; they can shed or not shed; pups in the same litter can vary. This is not the best cross for people with severe allergies.

F1-B = 25% Labrador Retriever and 75% Poodle (F1 Labradoodle and Poodle cross): This is Labradoodle bred back to Poodle; wavy curly shaggy look doodle very consistent in coat types. F1B is the MOST likely of any to be non-shedding and allergy friendly than ANY doodles and is the easiest coat to take care of. 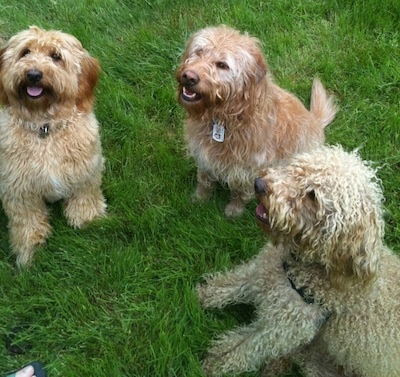 "These are three Miniature Labradoodles, representing the three coat types. Bailey, on the left, is a multigenerational Labradoodle with a fleece coat. Bailey is 9 months old and a wonderful dog—smart, easy to train and very affectionate and playful. His fur is so luxuriously soft! Hawi, in the middle, is a first generation Labradoodle with a hair coat. Hawi is 5 years old and very calm (except he loves to run and play at the park!), and smart—he's learned to sneeze on command! Cooper, on the right, is another multigenerational Labradoodle with a wool coat. Cooper is the most loyal dog, loves to be cuddled and loves to play and run. His ringlet curls are amazing! All three have great personalities, very low shedding, and are amazing pets. All dog breeds were shaped and designed by humans...our dog breed is just more recently developed. And no doggy odor! What more can you ask for? - Proud parents, Summer & Matt, Ashley & Tim, and Liz & Brian, all from the Seattle area." 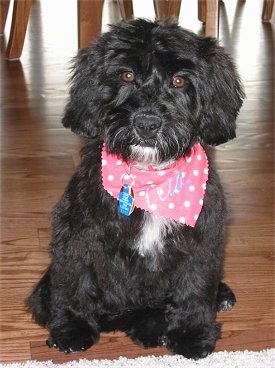 Pita at 4 ½months old—Pita is a F1b male Mini Labradoodle (25 % Lab 75% Mini Poodle). His adult weight is expected to be 20 to 25 pounds. Photo courtesy of Burr Oaks Dood Ranch

Litter of F1 Mini Labradoodles as they are growing up. They are a 50 / 50 cross of 37-pound female Lab Elly May and Pierre, a 47-pound male Standard Poodle. Photo courtesy of Burr Oaks Dood Ranch 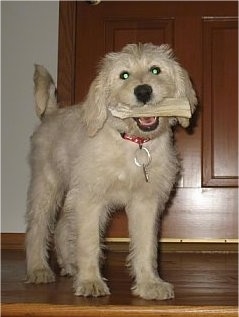 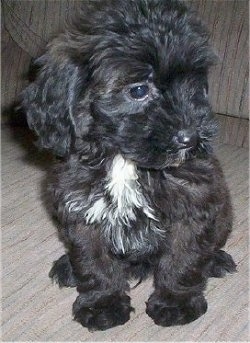 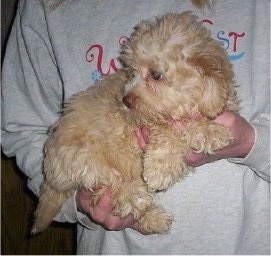 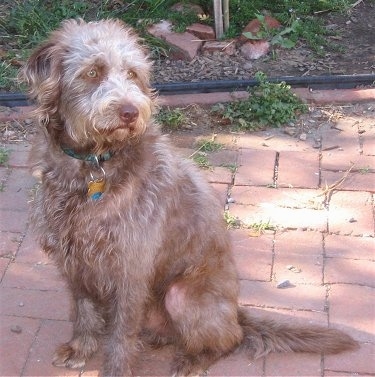 Jeb the café-colored F1 Mini Labradoodle at one year old 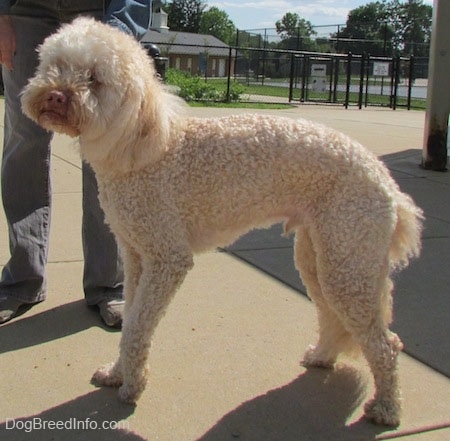