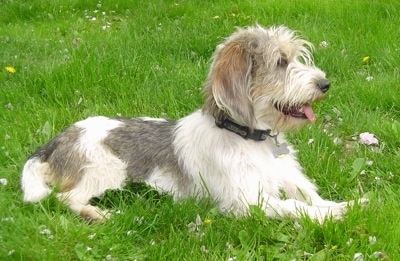 The Petit Basset Griffon Vendeen is a small, low to the ground dog, and is about 50% longer than it is tall. The topline is level. The head is in good proportion with the rest of the body. The domed skull is oval in shape when viewed from the side. The stop is clearly defined. The black nose is large with wide nostrils. The teeth meet in a scissors or level bite. The oval eyes are large and dark. The thin, long, oval, hair-covered ears reach almost to the tip of the nose. The tail is medium in length, set high and carried like a saber well covered with hair. Dewclaws are sometimes removed. The long, outer coat is harsh to the touch with a thick, short undercoat. The dog has shaggy eyebrows, beard and mustache. The coat is white with any combination of lemon, orange, black, sable, tricolor or grizzle markings.

The Petit Basset Griffon Vendeen is sometimes called the "Little Griffon Vendeen Basset." Cheerful, friendly and intelligent, this little dog is comical to watch. This delightful bugger is curious and self-assured. Bold and lively, compact and robust, it loves to explore. He's a dog that needs firm leadership and will become demanding and willful if his owner does not provide it. The PBGV is basically a pack animal and much of his behavior reflects this heritage. It has a casual appearance, but is always alert. Loves to dig and is an escape artist. These dogs are generally good with other dogs, but should not be trusted with non-canine pets, however can get along with cats. The PBGV is intelligent and can be trained for many purposes. He also has a great desire to please. The problem arises when the owners are not as strong minded as the dog and the dog believes he is the leader of the home, needing to come up with his own agenda (which may not be the same as the owner’s!). They are good with children and are fairly friendly with strangers. A bored or lonely PBGV will make his own 'entertainment'. Giving your dog daily long pack walks, proper human to canine communication, along with a variety of toys and things to chew on, a safe environment and eliminating the opportunity to be destructive will control this potential problem. The use of a crate not only provides this safety, but it also becomes his own special place. A PBGV that is provided with the proper amount of mental and physical exercise along with strong leadership from the humans will be less likely to get himself in trouble.

The PBGV is generally a healthy and carefree breed. Hereditary eye abnormalities include persistent pupillary membranes and retinal folds, neither of which commonly effect vision. There have been a few cases of glaucoma recently reported, a condition which usually results in blindness. Some juvenile animals may suffer from an aseptic meningitis characterized by lethargy, fever and neck or back pain. This syndrome, known as PBGV pain syndrome, varies in severity among affected animals and in rare instances can be fatal. Seizure disorders and epilepsy are infrequently reported within the breed, as are hip dysplasia, patellar luxation and elbow dysplasia. Hypothyroidism, food allergies and skin allergies have also been reported.

Will do okay in an apartment if sufficiently exercised. They are very active indoors and prefer cooler weather, but will do okay in warmer weather. This is one breed that should not be allowed to be off lead. The hunting instinct is too strong. All that is needed is one small scent and your hunter will be off on the chase. Having a secure, fenced-in yard is a very good idea. The PBGV like to dig and can be great escape artists. Watch for small holes and/or signs of interest along the fence line. He would as soon go under as he would to go over.

They need to be taken on a daily walk. While out on the walk the dog must be made to heel beside or behind the person holding the lead, as in a dog's mind the leader leads the way, and that leader needs to be the human. If under- exercised, this breed can become restless and destructive.

About 14 or more years

His coat should be thick, wiry and somewhat casual looking. A weekly brushing will remove loose and dead hair and help to control shedding. A pin brush, comb and possibly a mat breaker are the only necessary tools. Bathe him as needed. Properly groomed, this breed sheds little to no hair. Nails need to be clipped regularly. Ear canals should be kept free of excess hair and wax. Teeth should have regular care to keep them clean and free of tarter. Trim long hair on the bottom of the feet and check between the pads for foreign material and mats. 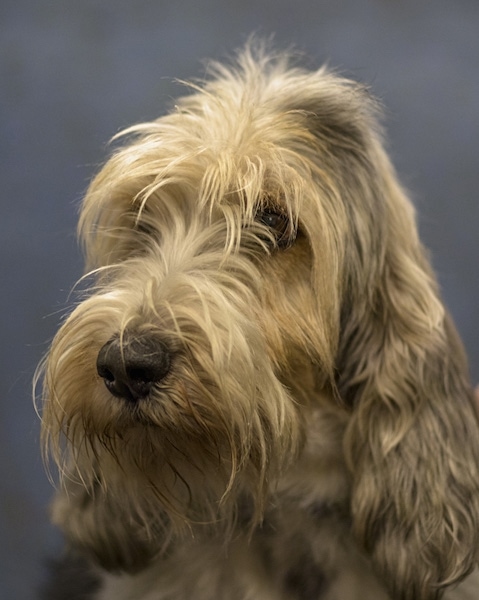 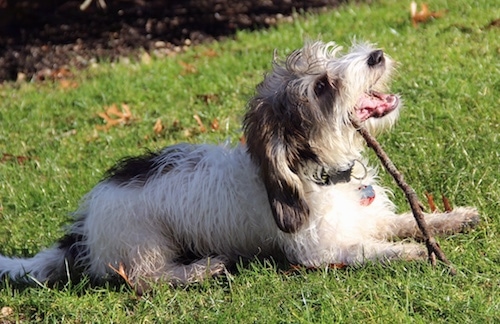 Hannibal the Petit Basset Griffon Vendeen as a 6-month-old puppy chewing a stick—"Hannibal is the sweetest, smartest and friendliest puppy you will ever encounter. He greets every stranger on the street as if he's been waiting an eternity to meet them. Loves all people, kids and most of all, other dogs." 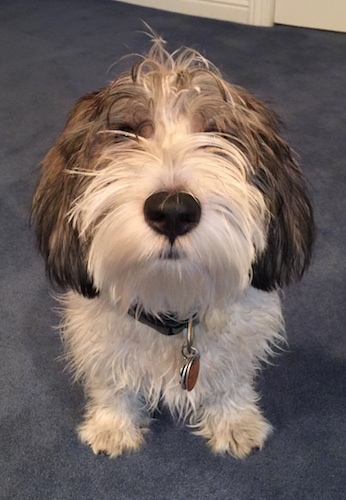 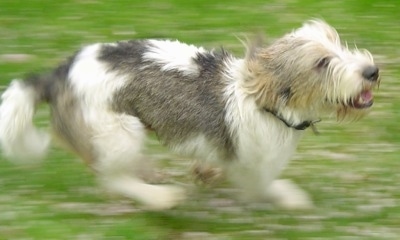 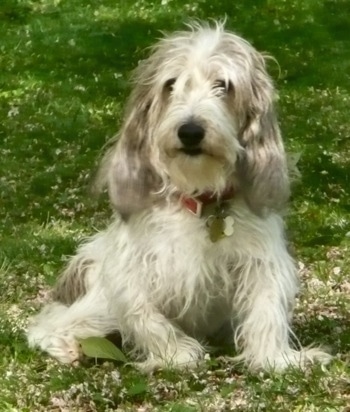 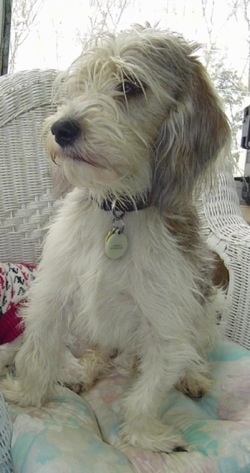 "Humphrey the PBGV at 7 years old—elbow dysplasia doesn't slow him down at all." 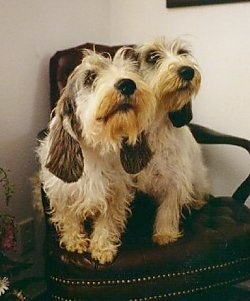 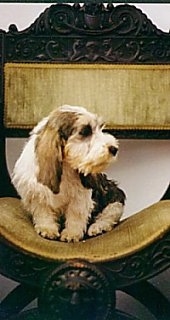 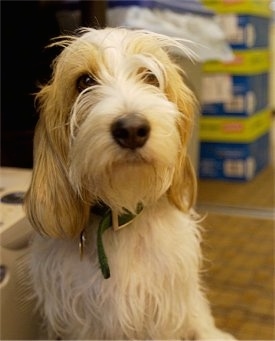 Chowder the PBGV at 2 years old—"She is the sweetest, friendliest dog anyone could ever meet. She's curious and playful and loves attention." 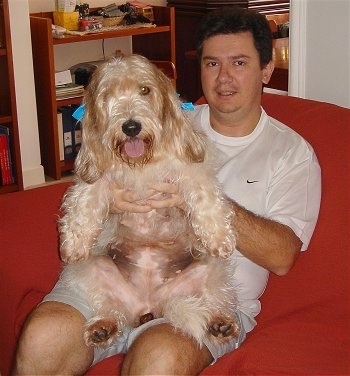 PBGV Trudy (female) at 3 years old in one of her favorite places, her owner's lap! 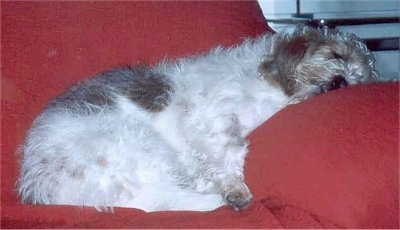