Raising a Puppy: The 43rd Week in his New Home—Spencer the Blue-Nose Brindle Pit Bull

A day in the life with Spencer the American Pit Bull Terrier puppy. Spencer's 42nd week—52 weeks old (1 year), 79 pounds, 22 1/2 inches from the ground to the highest point of the shoulders (the withers). 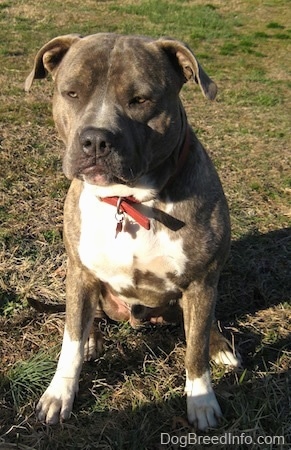 Getting the Profile Pic 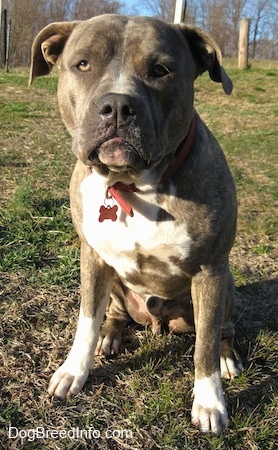 I always bring treats out with me when I take Spencer's Profile picture. I usually have to make kissy sounds or hope a cat comes over, or get Sara to come out and do tricks with him so he perks up his ears. Otherwise he puts his ears slightly back as I go from holding the camera back to getting a treat out. As soon as I go for the treat he perks up, but when I go for the camera he will often get a pathetic look on his face. He's not sad, just submissive enough not to get a begging look on his face and wait patiently.

It only took me until he was a year old to realize that if I got him used to me tossing the treat at him he would perk up with anticipation knowing the treat could be tossed at any time, rather than waiting for the normal, sit there for a bit, then a command to come get the treat. Dang, I should have been throwing the treats at him all this time! Now if only that cat would move. 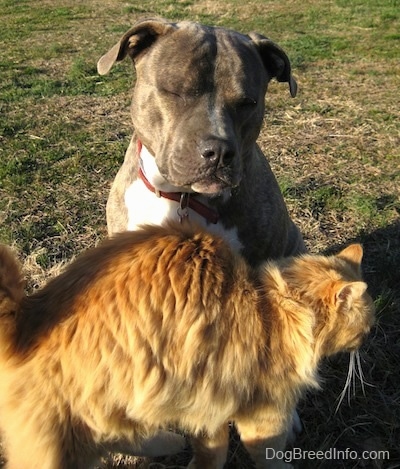 Oh, and about the cat. That's Pumpkin. It looks like Pumpkin is really loving up on the Spencer-pup, but a little cat psychology: when a cat rubs all over something it does not mean love. That cat is marking Spencer as "his." Yep, the cat rules the Pit Bull and the Pit Bull has no other choice but to accept it, ‘cause that cat is no weenie. That's one tough kitty. If Spencer even tries to get out of line he knows he'd get a scratch across the face. 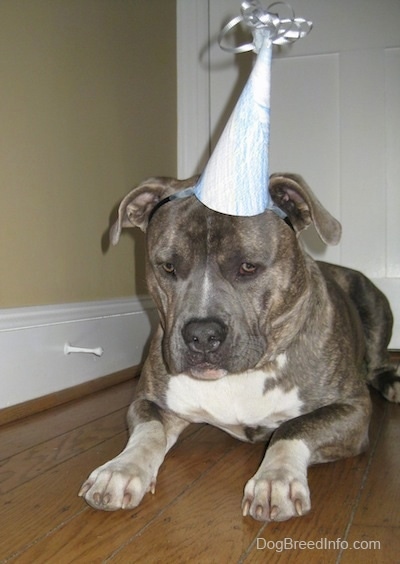 Today's your birthday! Happy Birthday to you! Sara made Spencer a party hat. He didn't much like it but he tolerated it so I could get a picture. 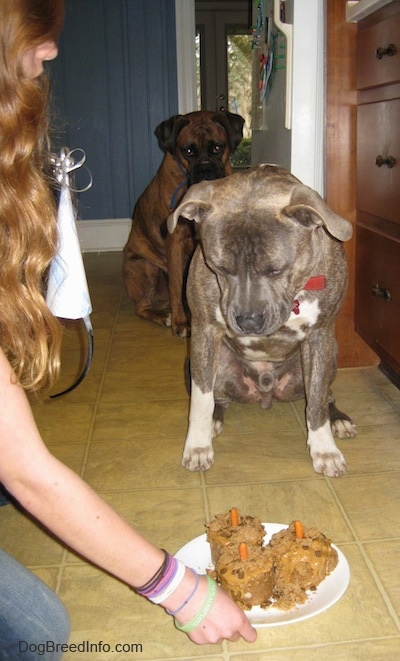 Sara also made him a peanut butter birthday cake with baby carrots sticking out of the top as candles with some sprinkled dog food from a doggie treat recipe. 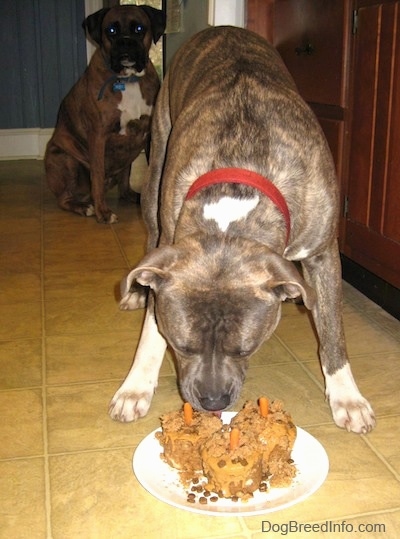 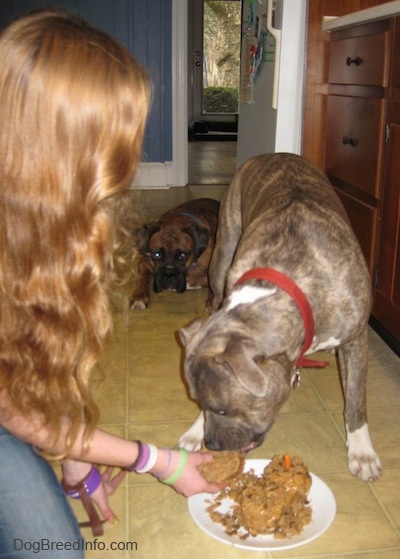 He didn't even mind when Sara helped him out and handed him a piece. 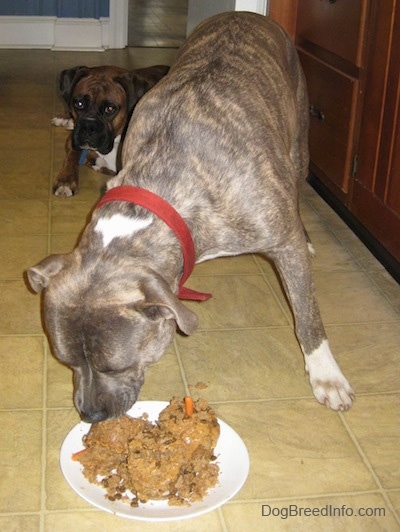 As much as he would have loved to, he was not allowed to eat the whole thing, though. It surely would have made him sick if he did. 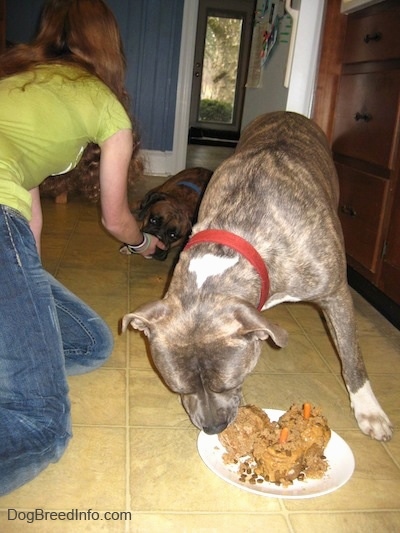 No worries, Bruno got some too. Just not too much because that boy has got some mean gas in him that he loves to share if he eats too many treats.

Now this is what I call Lazy Dog Play. Watch Bruno the 3-year-old Boxer play with his 1-year-old brother Spencer the PIt Bull. A good tug-of-war game. This is Bruno's idea of play without much effort. Hey whatever keeps the kid brother happy, right? ;-) Even though Bruno's joints have been sore he still enjoys playing with Spencer.

Bruno does get up to play sometimes, however. If he does not go for a walk his play gets on the rough side. It's a tricky thing giving him the right amount of exercise so he does not go mentally nuts and watching that he does not injure his hip, knee or back any more than they already are. I think the play is harder on his body than the walk. Hoping to get Bruno feeling better soon so he can get his normal walks in. He was having a good day when this clip was taken. 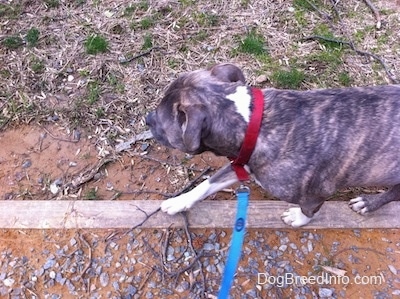 This silly pup, who is no longer a pup the nickname just stuck, still likes to walk on curbs. If he can get close enough to one during the walk he will hop right up and walk it like a tightrope. Here he starts walking a piece of wood that divided the grass from the stone path. It was not exactly a curb but the thin line somehow enticed him to carefully walk it.

Video of Spencer walking the wood and then walking a curb. 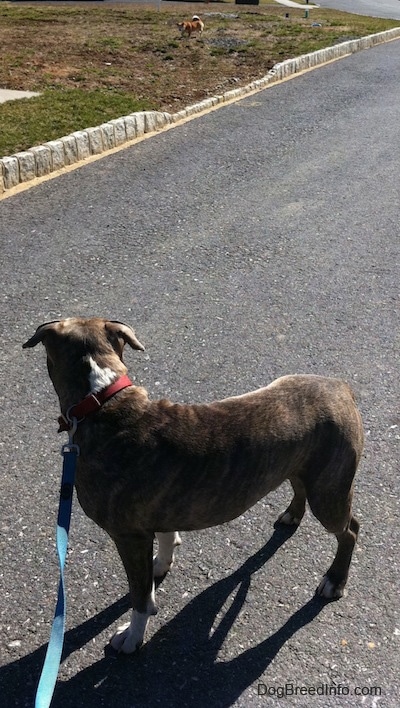 On one of our walks a little Shiba Inu came running over into the street barking and growling. This little fellow was baring his teeth as he ran at us. Spencer turned to look at the dog and I just kept walking, encouraging Spencer to keep going. Spencer kept trying to look behind him and he may have been a little unsure about the situation. After all, there was a dog smelling his rear baring its teeth, but he kept walking with me as he tried to turn to also look behind him. Spencer didn't show any signs at all of aggression. His tail was down but not curled under, and he was not puffed out at all. He didn't make any sounds; he was silent. I think this Shiba sensed he meant no harm because he growled his way back to his yard and didn't try and run over again, even when I stopped to take a picture. Either that or the Shiba considered our action of continuing to walk as him winning the battle of who owns that yard. It was most likely both. However, continuing to walk when a dog runs at you barking and growling is your best bet at avoiding any negative confrontations. I need to continue to teach Spencer that you do not challenge a dog back. He must leave it up to me to handle the situation.