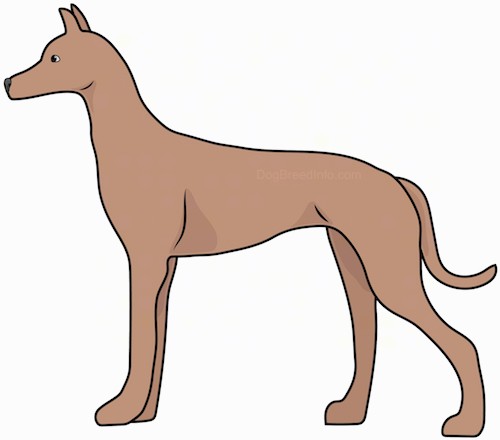 These dogs had a short coat that was usually a tan or light color. They were known to be tall, thin, and lanky with extremely long legs. Their ears were triangular and stuck straight up on their heads. Their thin tails were medium length and curled above their backs. Their long snouts were also thin and their heads were long rather than wide and placed on top of their long necks.

Since these dogs are extinct, there is no way to accurately know the temperament of the Tesem. We can only speculate that they were fierce hunters, loyal, friendly companion dogs.

There are no records of this dog’s height and weight.

There are no records that show the dogs health issues.

All we know for certain about the Tesem is that they lived among the Ancient Egyptians.

There is no way to know for certain what exercise would be best for this now extinct breed.

We have no way of knowing how long these ancient dogs used to live.

There are no records that show the litter size of these extinct dogs.

Since they had a short coat, they probably only needed to be brushed or bathed when necessary.

The word Tesem translates to “hunting dog” and was considered a type of dog rather than a breed. They were around during the time of the Ancient Egyptians and had many tasks. Tesem dogs were used as hunting dogs, guard dogs, and companion dogs. While this dog is long gone, they have influenced many breeds throughout the years. Basenji and Africanis were both descendants of the Tesem and the Tesem also influenced Middle Eastern and African sighthounds such as Azawakh dogs, the Saluki, and the Sloughi.

Egyptians commonly used hieroglyphics of the Tesem that dated back to around 3000 BC. We know that they were valued by the Egyptians because these dogs were often mummified and buried with their master when they died. This dog was known to represent the god Anubis, a jackal headed god known for watching over the dead.

While these dogs are ancient, there are some that believe the Tesem is simply the known as a different name and living in Northeast Africa under the name of Pariah Dogs.