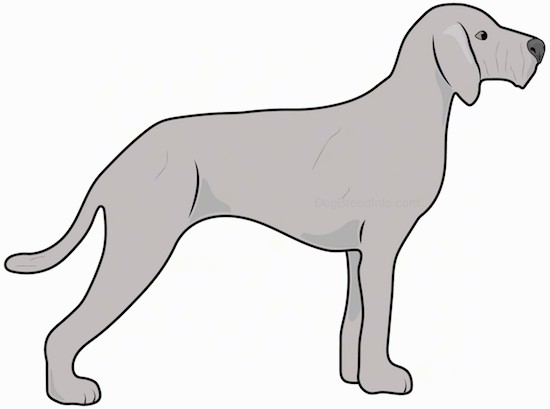 The Chien-gris, also known as the Gray Dog, had mostly gray fur with spots of red, tan, or white along their medium length, wiry coats. Although some say the breed was of medium size, they were known to be large dogs standing between 20–27 inches tall and anywhere between 55–95 pounds. Their legs were thin and tall while their chests were muscular. Compared to other sighthounds, the Chien-gris was more delicately built than others. They were also known for their long snouts with longer hair under their chin, giving the dog a beard or goatee.

This breed was known to be very friendly with an affectionate personality. Because they were used as hunting dogs, they were loyal to their owner and followed commands easily. Because this dog is extinct, not much else is known about the temperment of the Chien-gris.

This dog is extinct therefore there are no proven records of their health issues although because they were an active hunting breed, they most likely would have had issues regarding knees, hips, and joint pain.

Because this dog needed a lot of exercise, the Chien-gris would have prefered a large open space to run. Being a high energy dog, they would not have done well in small spaces such as an apartment with no backyard.

This hunting dog would have needed a considerable amount of exercise in order to calm their minds. They would have needed to be outside with a job to perform in order for them not to misbehave because of their energetic personality.

Their wiry coats needed to be brushed every once in a while and check for burs and thorns after a hunt. They needed a bath only when necessary.

The Chien-gris, also well known as the Gray Dog is an extinct dog breed that originated from France during the Medieval times and was prefered by King Louis. This dog was used as a scent hound for the king and royal nobility from around 1200–1470 because of its large stature, big ears, and well rounded hunting instincts. There is not much confirmed information on the Chien-gris because the Griffons are a fairly unknown group of dog breeds. The information on how the Chien-gris came to be were all born from speculations, theories, and rumors. Most say that the Chien-gris was bred by the Gaulish tribes who used to rule the land that is now modern day France and Belgium. The dog that they originally used was called the Canis Segusius which was known for their wiry coat and hunting instincts, much like the qualities of the Chien-gris. Their wiry coats were prefered as they acted as an extra layer of protection against the swampy regions of the land while also protecting their skin from animal attacks while hunting. The theory is that the Canis Segusius was the original breed in which all Griffon breeds descended from, including the Chien-gris.

Another theory states that the Spinone Italiano was the original Griffon in which the Chien-gris descended from although there is no historical evidence to support this as others claim that the Spinone Italiano also stemmed from breeding the Canis Segusius. Others say that the Chien-gris came from the Irish wolfhound or Irish Terrier that were imported into France from Britain, but this theory has been debunked because the dogs used in Britain originated from the scent hounds related to the Beagle.

Nobility in France made the Chien-gris immensely popular throughout the country, resulting in a plethora of mixed breeds that were descendants from the Chien-gris including the following:

As time went on, the ruling nobility of France began to prefer slightly different breeds such as the descendants of the Chien-gris. The Chien-gris breed was on a slow decline in popularity, especially towards the end of the 1400’s. Because the Chien-gris was once a famous breed held by the rich families, the poor would slaughter them in anger for eating the food that the humans could have eaten instead.

After the French revolution, the Chien-gris was most likely extinct as no one cared about keeping the breed alive anymore. By the mid 1800’s, the breed was most definitely extinct. 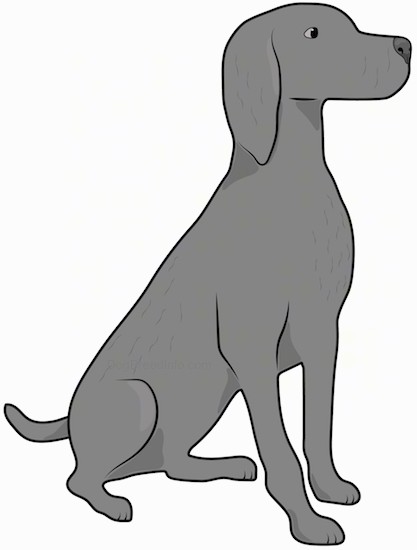