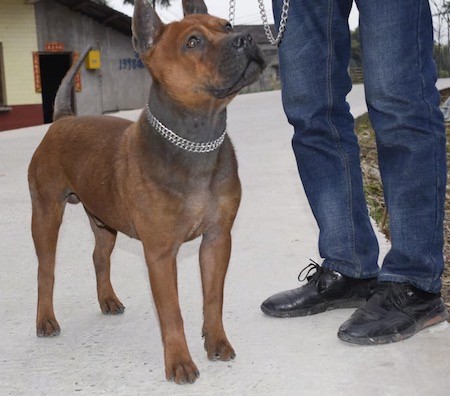 The Chuandong Hound is a medium sized dog with a deep red/mahogany (orange) color in a thin coat. Its ears are erect. The jaw is strong. The teeth should meet in a perfect scissor bite and be set square. The teeth should not be visible when the mouth is closed in a natural position. The tongue can be blue, dark blue or with spots (blue points). The Chuandong Hound's muscles are well developed, and its anatomical structure is suitable for activities. The dog's body has a level topline and is rectangular and slightly longer than it is tall. The head is a fair length, powerful without being coarse with well developed cheeks, finer in the females. The skull is flat between the ears. The forehead is slightly loose with fine wrinkles without excess on the skull. The length of the skull is equivalent to the length of the muzzle, divided by the stop, as equally as possible. The stop is clearly defined but moderate. The muzzle is broad from the root to the tip of the nose, but not snipy. It could have a black mask as a puppy and the colour will fade out as the dog matures. The height to the elbow is about half the height at the withers. Males should be muscular and well defined, whereas females tend to be more streamlined with an air of femininity.

The Chuandong Hound is noble, loyal, courageous, alert, intelligent and dignified. It is good with respectful children, but can be aloof with dogs it is not familiar with. Proper leadership and canine to human communication will resolve this. Socialize this working breed well as a puppy with other dogs and non-canine pets. They are natural non-canine pets. The Chuandong Hound is fearless, powerful and muscular, tough and active with excellent jumping ability. In the past, it has been used for hunting. They are natural guard dogs with high drive but are not suitable for competitive or police bite work. If its owner is not with it and a stranger approaches, the Chuandong Hound will heighten watchfulness and make its presence known. If its owner is present, and it sees the stranger is friendly, it will drop its guard even if the owners leave. They are independent and can be a little standoffish with strangers at first but are extremely devoted to their family. Since the Chuandong Hound is an evolutionary breed and not “manmade,” their natural instincts are extremely keen and require a dominant owner that isn’t heavy-handed. They do best with an owner who is calm, but firm, confident and consistent with the rules.

Because the dog's coat is very short and sparse, some Chuandong Hounds can develop skin problems, but it is not common in this breed. A premium diet, preferably human grade, will significantly reduce the chance of skin problems. Natural selection has successfully eliminated undesirable traits in the breed. Furthermore, there has been no inbreeding among the Chuandong Hound. Therefore, no known major health problems exist in the Chuandong Hound.

The Chuandong Hound will do okay in an apartment if it is sufficiently exercised, but it isn’t ideal. Breeders in the U.S. usually won’t sell to anyone living in an apartment. This is a dog of medium size; it does not need a large space, but it does need regular exercise and loves a nice, grassy yard. The Chuandong Hound tends to prefer quieter moments when at home with its family and will not do well in a “rowdy” household.

This breed needs at least 30 minutes of vigorous exercise a day. They make good jogging and hiking companions or at least need to have a daily, brisk, long walk. Whether you are walking or jogging it is important that the dog is made to heel beside or behind the human holding the lead. Never in front, as instinct tells a dog the leader leads the way, and that leader needs to be the human. The Chuandong Hound is a natural hunter with an exceptional sense of smell and should never be allowed to roam without supervision.

This breed does not require a lot of grooming. Bathe only when necessary.

The Chuandong Hound originated from the ancient Chinese Chongqing Dog, an old, unique breed, thought to have been in existence since the Han Dynasty in China. The origin of this breed is Chongqing, located in the southwestern region of China.

The Chinese Chongqing Dog was divided into two breeds: the Chuandong Hound and the Chongqing Dog. They are not the same breed but came from the same ancestors and both are commonly called Chongqing dogs.

The Chuandong Hound has a longer muzzle and is a scenthound used in the mountains for hunting. It is seeking FCI classification group 6.

Whereas the Chongqing Dog looks more bully and is a molosser dog. It has a shorter muzzle, rounder head and a flat, wide skull shape. It is seeking FCI classification group 2.

Chuandong Hounds are used for protection of the home; they are good working dogs and family companions. 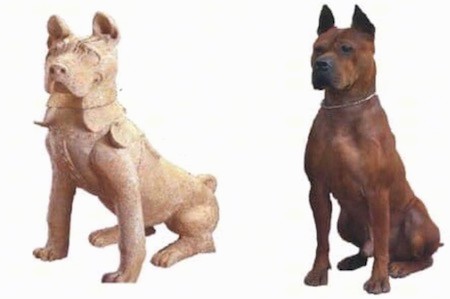 This comparison shows the Chuandong Hound breed then and now. On the left an ancient artifact and on the right, a dog from today. 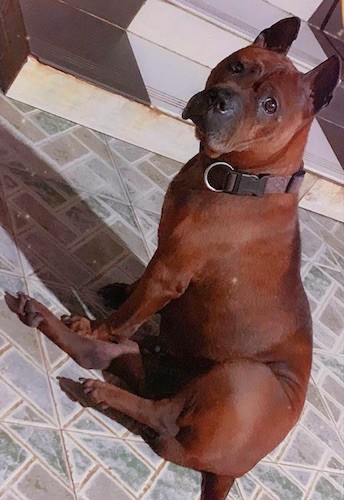