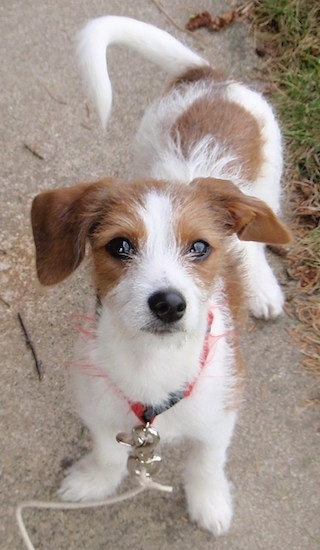 Sassy the Chiweenie at 6 months old—"Sassy is a very active puppy, who came to live with us at 7 weeks old. We have two 6-year-old Bichon mix dogs that just tolerate her. She likes to pick on our female. She is very head-strong but very smart. She does chew on everything. We have made sure she has a lot of chew toys. She is pretty skiddish to meet anyone, and barks at strangers. She does well on puppy pads -although she poops where ever she wants. (mainly on the carpet.) She is showing improvement on that as she gets older. Her favorite place to be is on my shoulders... (she thinks she's a cat.)" 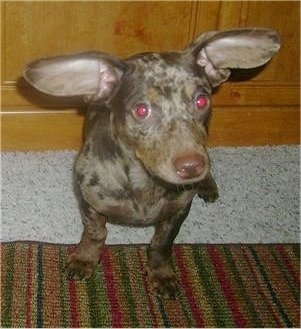 "Spots is a dappled brown/light brown Chiweenie. My 3½-–year-old daughter named him and when she said Spots, I said "You mean Spot." She said, "No mommy...he has more than one Spot!" She said it as if I was crazy. Spots is about 5 months old in this picture and very mischievous. He has energy about 22 hours a day. He chews up everything and especially enjoys pooping and peeing on my carpet!! He also enjoys playing hide-and-seek when it is time for me to go to work. His ears used to hang down but they are up all the time now like a Chihuahua's. His body is more like a Dachshund's." 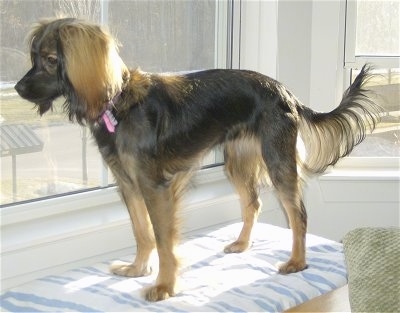 Nestle, a Chiweenie at 11 months old—"Nestle (longhaired Chiweenie) loves to stand guard in the window. She loves to smell the air when the window is open and will "point" when people walk by. You can really see in this picture how tall she is for a Chiweenie!" 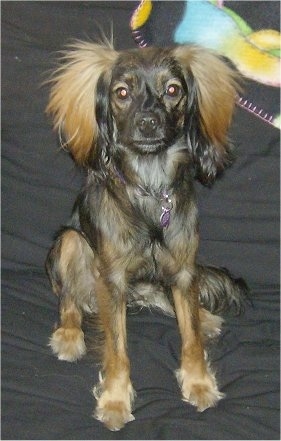 Nestle the longhaired Chiweenie (longhaired Dachshund / Chihuahua hybrid) at 11 months old—"She is really unique! Moments before this picture, she used the couch as a napkin, like most dogs do! Her ears tend to get a lot of static, as you can see in this picture!" 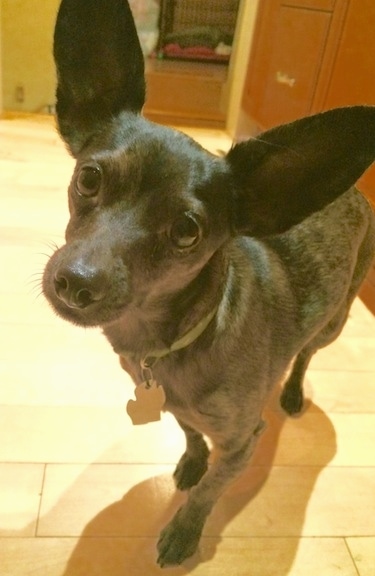 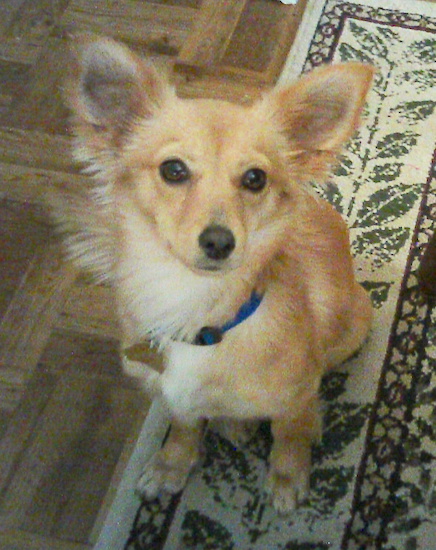 "This is our Chiweenie Taffy. She is half longhaired Dachshund and half Chihuahua. She is 1 year old, and is an animal shelter rescue. Taffy is calm, submissive, warm and loving. She is shy around new people, but rarely barks! She loves to sunbathe on our front porch, and sleeps right next to us as close as she can. She is relaxed but attentive. Really enjoys her daily walks with us. We have successfully used some of The Dog Whisperer's techniques to train her. She learns quickly. Gets along well with our 2 cats (who are bigger than her!). No maintenance is needed except an occasional washing. This dog is great!" 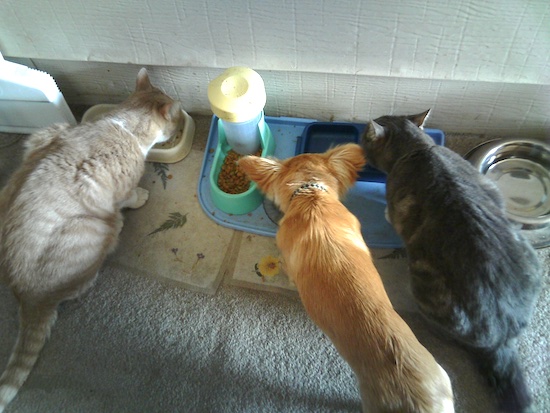 Taffy the Chiweenie, half longhaired Dachshund and half Chihuahua, in the middle eating with two of his cat friends 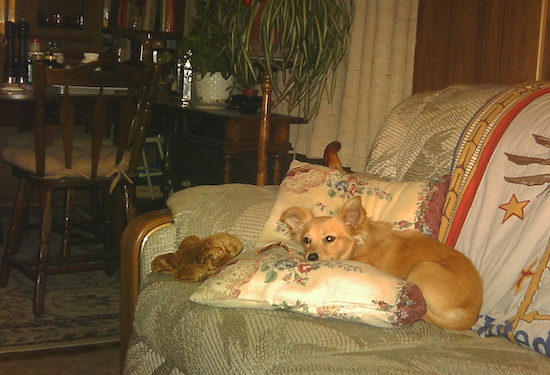 Taffy the Chiweenie, half longhaired Dachshund and half Chihuahua, on the couch 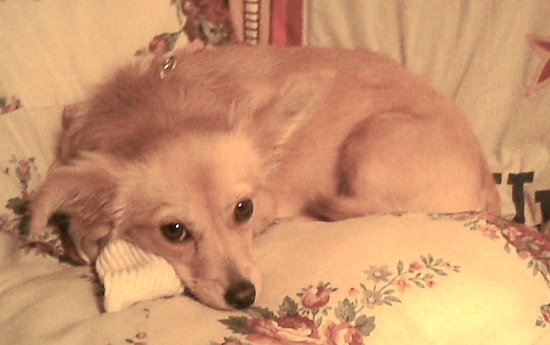 Taffy the Chiweenie, half longhaired Dachshund and half Chihuahua at 1 year old on the couch 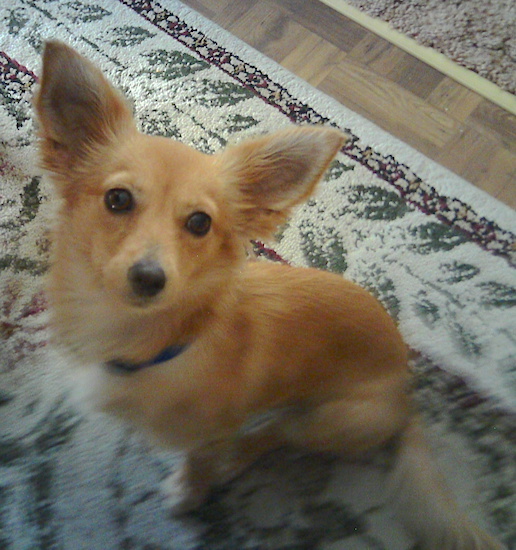 Taffy the Chiweenie, half longhaired Dachshund and half Chihuahua at 1 year old 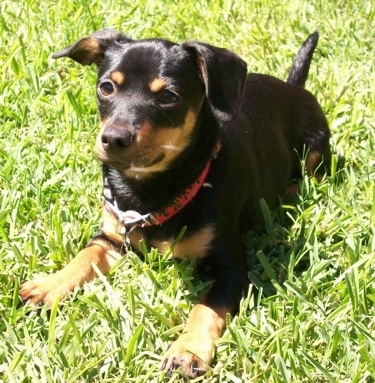 "This is our Chiweenie Sham Wow! (We just call him Sham.) We adopted him from a local animal shelter when he was about 10 weeks old. He had been taken from his original owner because that person had more animals than allowed by city ordinance. We realized that the shelter had rescued dozens of other small purebred dogs and puppies from that person’s house. Many of them were in very bad condition —covered in fleas, dirty and un-groomed, but in spite of the bad environment they had been living in, they were still friendly and social.

About a week after we brought Sham home he became very sick, and we almost lost him. The shelter had given him a vaccination, but it was too late to prevent him from contracting distemper. The vet worked very hard to save him and help him get better, but for a few weeks we did not think he would make it. Sham is certainly a fighter—he recovered from the disease, but sadly, some of his littermates were not so lucky. The distemper also caused a permanent twitch in his left leg, so that he is constantly “bobbing” up and down when he stands.

"He is now 10 months old, and he’s a rowdy, enthusiastic, and feisty little "teenage" dog! Other than the twitch in his leg, you would never know that he had been so terribly sick.

"Now that he is a healthy teenage Dachshund / Chihuahua mix, we are working diligently to make sure that he does not become the king of the house. We watch The Dog Whisperer all the time—Cesar's advice has worked wonders with our Beagle (and we all know how those Beagles can be!), so now we're making sure that Sham grows up to be a "balanced dog" too.

"I try to share Sham’s story as often as possible for two reasons. First, to help discourage people from buying from puppy mills or other disreputable breeders. I believe that his original owner may have been using all those small dogs for breeding and selling puppies. Obviously the owner could not properly care for all of them, and sadly, several of them died as a result of the disease and parasite infested environment. Secondly, to encourage people to get their dogs vaccinated—and to keep their vaccinations up-to-date! Canine Distemper is a horrific disease—dogs don’t usually survive, and they suffer unimaginable physical deterioration as the disease progresses. Please don’t risk losing your family’s loving companion—be sure to get them vaccinated!!" 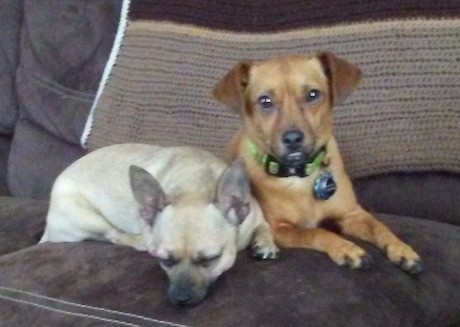 "The little red guy (right) is our rescued Chiweenie, Bentley. He is 6 years old and the best dog I've ever had! The little fawn girl (left) is his sister, Sookie and she is a pure Chi. We got her when Bentley was 3 and they are totally inseperable! They are quite the funny couple and have helped each other with little quirks they each have. I've had Doxies my entire life and discovering a Chiweenie is even better than all my lovable Doxies! For smaller dogs, they are fun, snuggley, and they have pretty good endurance for outdoor activities. I had no trouble potty training him and thanks to his sister, he now loves the car! He used to get carsick until we got her and she showed him car rides were fun! His only quirk is he is petrified of fireworks but so is his sister! I LOVE my little buddies and would recommend a Chiweenie to anyone!"