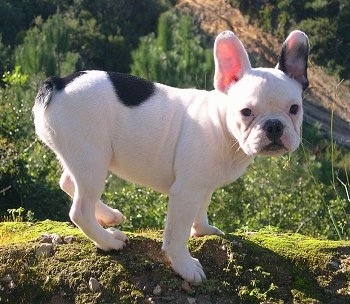 "Rosa the French Bulldog can do retrieving until she is worn out. She has a very strong grip on things, even if she needs to jump into the air to get them. She is extremely loyal and affectionate. She is excellent with children."

The French Bulldog is a sturdy, compact, stocky little dog, with a large square head that has a rounded forehead. The muzzle is broad and deep with a well-defined stop. The nose is black, but may be lighter in lighter colored dogs. The upper lips hang down over the lower lips. The teeth meet in an underbite and the lower jaw is square and deep. The round, prominent eyes are set wide apart and are dark in color. The bat ears stand erect, are broad at the base narrowing in a triangular shape and rounded at the tips. The height at the withers to the ground should be approximately the same as the length from withers to the base of the tail. The tail is either straight or corkscrew. The chest is broad and deep with the front of the dog being wider than the back end, forming a pear shape. The dewclaws may be removed. The medium-fine coat is short and smooth. The skin is loose, forming wrinkles around the head and shoulders. Coat colors include brindle, brindle and white, cream, cream and white, fawn, fawn and white, fawn brindle, white, white and brindle, white and fawn, black, black and fawn, black and white, fawn and black, fawn brindle and white and gray and white. It can have a black mask, brindle markings, be piebald, spotted and/or have white markings.

The French Bulldog is a pleasant, easy-care companion who is playful, alert and affectionate. It is enthusiastic and lively, without being yappy and loud. Curious, sweet and absolutely hilarious, it has a very comical personality and loves to clown around. It is bright and easygoing. The Frenchie gets along fairly well with strangers and other animals and enjoys being with its owner. It plays well with other dogs. Those Frenchies that are allowed to believe they are alpha may become dog aggressive. This breed needs leadership and will not thrive without it. The Frenchie cannot be owned and ignored. When it senses an owner is meek or passive toward it, it will become very stubborn and even snappish. They can be trained if the owner is calm, but firm, consistent and patient. Proper human to canine communication is essential. Do not give them affection or sweet talk them if they are displaying any type of unwanted behaviors; instead correct them sternly with an air of calm authority. French Bulldogs are clean, and most will try to avoid puddles. Most cannot swim

so take caution around water. This breed does best with considerate children who know how to display proper leadership. This breed may drool and slobber; however a good percentage of them do not. They are also a relentless hunter of mice. Do not allow this sweet little bully to develop Small Dog Syndrome.

French Bulldogs are prone to joint diseases, spinal disorders, heart defects and eye problems. Dams often have to deliver pups by cesarean section, because pups have relatively large heads. They often have respiratory problems. They tend to wheeze and snore and have trouble in hot weather. Prone to heatstroke. An overweight Frenchie may have trouble breathing, because of a swollen abdomen. Do not overfeed this breed. Putting them under anesthesia is risky because of their breathing issues. French Bulldogs are high maintenance and potential owners need to be aware that their vet bills may be high. Take this into consideration before choosing a Frenchie puppy.

Frenchies are good for apartment life. They can be fairly active indoors and will do okay without a yard. They do not do well in temperature extremes.

The French Bulldog needs to be taken on a daily walk, where the dog is made to heel beside or behind the person holding the lead, as instinct tells a dog the leader leads the way, and that leader needs to be the human. Simply running around a large yard is not going to satisfy their migration instinct. Take care in hot weather. They love to run and play and can play for hours if you let them. Some have higher energy levels than others.

Very little grooming is needed. Regular brushings will do. This breed is an average shedder.

The French Bulldog originated in 19th Century Nottingham, England, where lace makers decided to make a smaller, miniature, lap version of the English Bulldog that was referred to as a "toy" bulldog. In the 1860s, when the Industrial Revolution drove the craftsmen to France, they took their dogs with them. The toy bulldogs became popular in France and were given the name the "French Bulldog." The breed eventually made its way back to England for dog shows. The Brits were not happy with the name "French" given to a dog that was originally from England, however the name "French Bulldog" stuck. 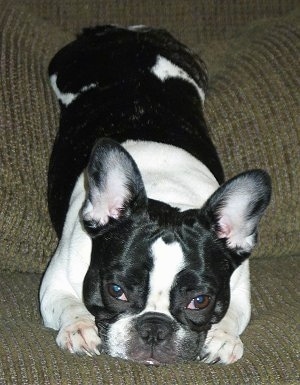 Moxie the 10-month-old black and white French Bulldog doing what she does best...lounging. 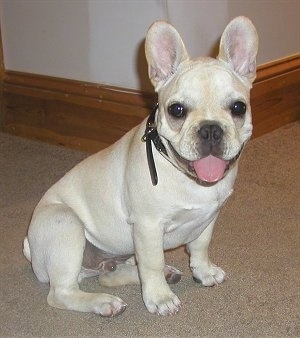 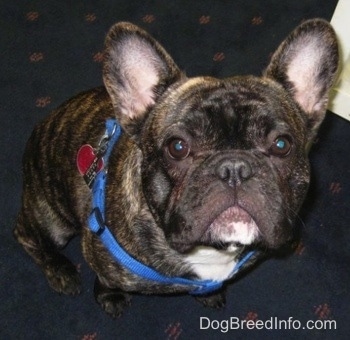 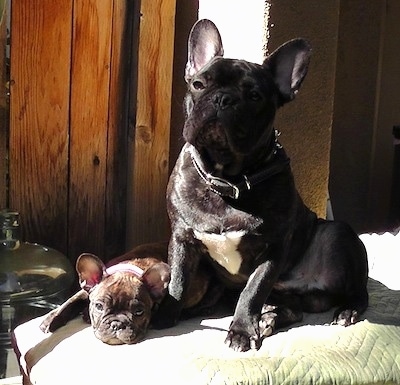 "These are my 2 Frenchies. Capone is the large black male, Kona is the little brindle. Capone is 10 months old in this picture and Kona is a 4-month-old puppy. Capone is a gentle giant. He is 35 lbs. and full of energy. Kona is much smaller right now, but is the roughest little puppy I've ever had. She chases Capone around all day nipping at his heals." 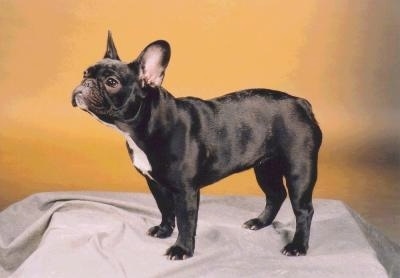 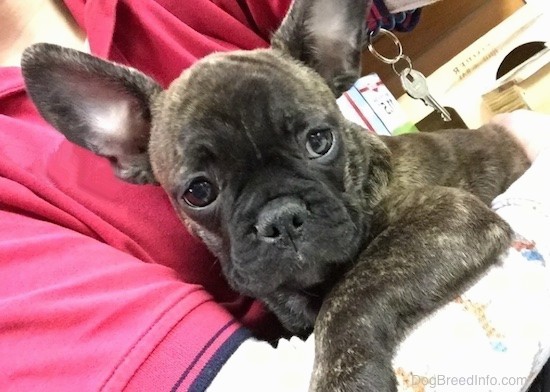 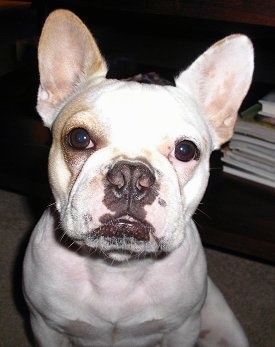 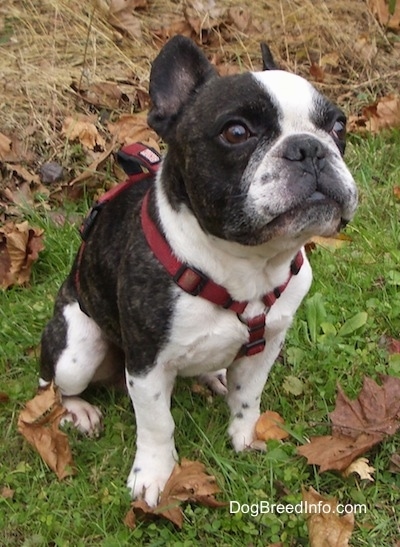