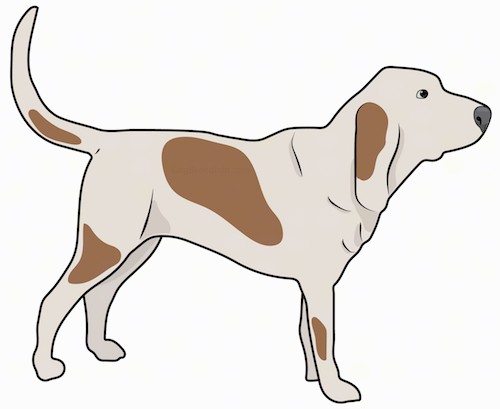 The Southern Hound was a large breed and was known to appear as a mixture of both a bloodhound and an English Foxhound. They were thick boned and an average of 25 inches tall. They had a broad chest and a barrel like ribcage. They would walk in a way that made them look like they were wobbling and their legs would often appear bent because of this. They had a longer tail that would often be held up while they were following a trail and were also known to be quite muscular. Their snout was long and they had wide, thick skinned ears that would fall at the side of their head. A large dewlap of extra skin formed on their chest along with extra skin around their back although there were no obvious wrinkles. They came in a variety of colors including the famous tricolored patterns of Beagles along with a number of mixed colors of black, browns, tans, white, etc.

This dog was a loyal scent hound that found enjoyment in following a scent trail for long periods of time without becoming bored. Often they were known to become so excited by the scent trail that they would wag their tail and lick the ground. They were pack dogs and had a low level of aggression toward other dogs. They were mostly relaxed dogs that moved at a slower pace than other scent hounds. After following a trail for hours, they would also hunt down the animal meaning that they were able to show aggression toward other animals.

There are no records showing whether this dog had health issues.

There are no records for how long the Southern Hound lived.

There are no records for how large their litter size was.

These dogs had a short coat and probably only needed to be brushed and bathed when necessary. Their long drop ears would have needed to be kept clean.

During the Renaissance, only the wealthy in the nobility were able to afford hunting dogs, not to mention it was illegal for the lower class to own them as well. The nobility set aside land specifically for hunting as it was a means of political, social, and personal status. During their hunts, they would bring along packs of hounds that would ride alongside their horses.

While there are many theories of where this dog came from, the most popular is that they were brought to England in 1066 by the Norman armies. The Norman armies were related to the Vikings and had made their way to Northern France and eventually stayed there. France was known for their prime hunting dogs, especially the dogs that were created and kept by the monks. We can credit the monks at Saint Hubert Monastery for creating what is now known as the Bloodhound and was then known as the Saint Hubert Hounds.

The Normans brought several british dogs to England including the Bloodhound, Talbot, and the Grand Bleu de Gascogne. While some say that the Talbot was simply a white Bloodhound, others claim that it was its own special breed. Anyhow, these three breeds that were brought over were all mixed along with possibly a few unknown british dog breeds in order to create new breeds. This included the Southern Hound. People who believe that the Southern Hound was bred from French breeds believe that the Southern Hound was originated sometime between the 1200’s to 1400’s.

There are people who also believe that the Southern Hound was actually the original scent hound in Britain. This would mean that the Southern hound had been around before the Norman Invasion and before the Roman Empire in 43 A.D. It is unclear whether this is true although the Southern Hound was said to resemble the same hunting dogs that were Britain's main trade at the time. Others say that they resembled little to nothing of the hunting dogs back then and instead that they were actually Terriers or Spaniels.

There is also a theory that combines the last two theories above. Some say that the Southern Hound was a cross between hounds that were native to England at the time with dogs imported by the Normans from France. This theory suggests that they were bred and became there own breed around the year 1100 A.D., maybe earlier.

The Southern Hound was known to have the best nose to sniff out trails other than the famous Bloodhound. They were able to follow a trail that was days old and be able to follow it for hours or even days without tiring. They were known to walk very slowly while following the trail although this wasn’t a problem for the nobility as they could easily follow on horseback. Once the trail was followed to the end, the animals, usually deer, were either shot with an arrow or hunted and killed by the Southern Hound. This dog was most likely used by the nobility from the 13th–17th century, up until the economy, environment, and government changed drastically.

Because of the political and agricultural changed in England, hunting was changed forever. New crops were being imported meaning more land was being farmed and less land was being used as hunting land. The population of deer, boar, and other game that was frequently hunted was now smaller than it ever was before. This meant that hunting was less frequently done than before. These changes did however make it easier for the red foxes to grow in population. Red foxes were now seen as vermin as they would destroy crops, hunt farmers lamb, steal eggs, harm the horses and cattle, and kill chickens. Because the red fox were now compared to rats and other vermin, the red fox was not hunted by the nobility until the 1500’s.

Since the red foxes were a huge problem for the farmers, they began to illegally keep scent hounds such as the Southern Hound in order to get rid of the pesky vermin. Many poor farmers only owned one or two Southern Hounds although in the 1500’s farmers began to come together and keep packs as large as 10–20 scent hounds. Most of these scent hounds were probably North Country Beagles while others were mixed breeds. The new popular sport became fox hunting, created by the farmers. The nobility would soon make this sport their own although Southern Hounds were not well equipped for the job. 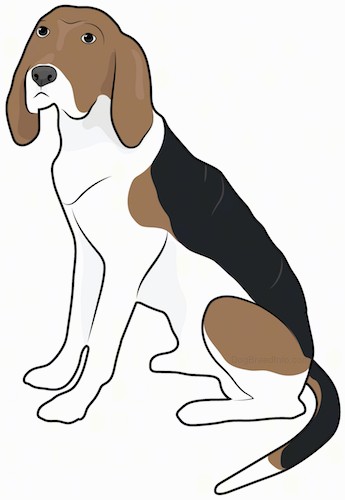