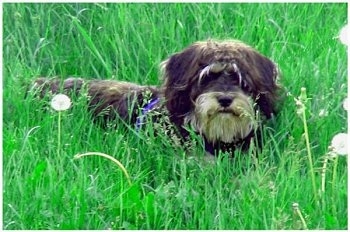 Jasper aka Jazz is an intelligent, curious, playful and friendly 9-month-old Miniature Schnoodle. He eagerly learns whatever I teach him. The one exception is untangling himself when he has wrapped his line or lead around anything in reach (like trees, picnic table legs, lamp posts or fences). Because he moves in circles and jumps up and turns in the air, he is often in this predicament. I can't help but wonder if this is a game he plays, a ploy for attention. 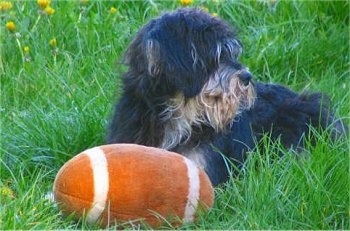 He does not bark very often but he converses with other dogs with a variety of sounds in a wide range of notes and tones. 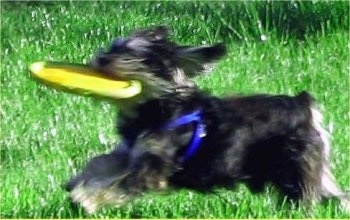 Jasper runs like the wind and has been described as a blur crossing a field. With the undersides of his ears white, white eyebrows and white mustache and beard he looks much older than his 9 months, but it is apparent he is a young puppy when his short (docked) tail waggles furiously at the prospect of attention from just about anyone. 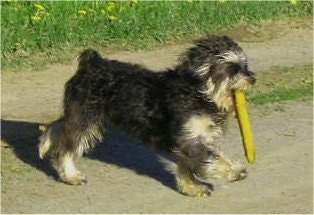 He is patient, accepting, affectionate and nobody's fool. He will run circles with the fastest of dogs—be they large or small. Sweating and panting, he needs just 2 minutes rest before he is at it again. 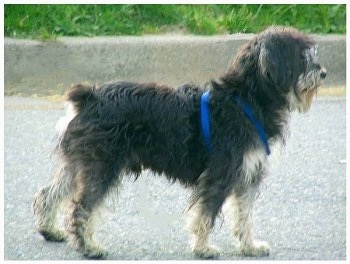 Jasper likes to take me for walks, but he has learned "heel" after only two sessions of my casual instruction. He is headstrong and doesn't always obey on the first command, but he will in time. 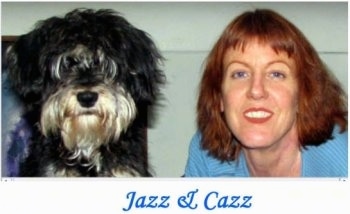 Jazz is his nickname, which make us Jazz and Cazz. 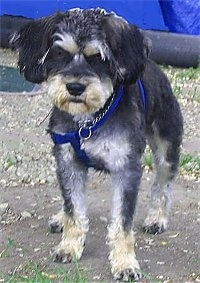