Spike and the Kids

Spike just loves kids. He and my 4-year-old are like two peas in a pod. They are constantly at play. She calls him Buddy. When they are outside together he follows her wherever she goes. Kind of like a personal bodyguard. There are times when I am calling Spike and he is not coming, so I tell her to call him. She yells "Buddy, come here my Bud Boy" and he comes running as fast as he can. Honestly, I wouldn't want to be the stranger that attempts to get in between the two of them. 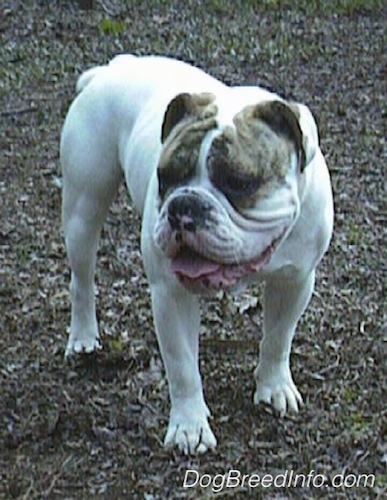 Speaking of a personal bodyguard...

Just this past holiday weekend my daughter was out playing by the road. A man taking his morning stroll was walking by. Spike was off in the yard just doing his own thing. He saw the guy but was ignoring him. The guy stopped and started to talk to my daughter, when suddenly this 59-pound mass of muscle came snarling and growling to the rescue. Staying close to her, he put himself in between my daughter and this dangerous man trying to talk to her. My husband, who was down in the yard, tried to call Spike away, but he would not budge from his post. The guy decided she was not worth the conversation and went on his way. Of course there was no real danger; the man was just being friendly. But as far as Spike was concerned there was a need to guard. My daughter later came inside with a big smile on her face and said to me, "Spike was protecting me." Then she gave her Bud Boy a big hug.