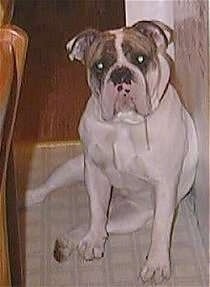 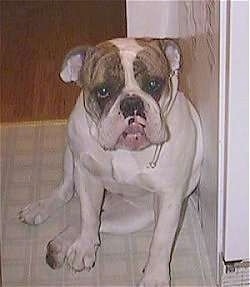 My English Bull is the most affectionate dog you will come across. However, there is a price to pay for the intense affection he wants to give to you in the worst way: THE SLOBBER. I feel sorry for him sometimes. (Actually, I feel sorry for my clothes.)  He wants nothing more than to be your best friend and yet I hear all day "Spike, get away" from everyone, except for his Aunt Ginny. She loves him, slobber and all. When Spike comes to say hi to you, you are left with a huge wet spot on your leg. You might as well dump a cup of water, gooey water at that, on your leg. If he just got a drink, try dumping two cups. Actually, he's not that bad. But I do find myself wiping the walls all the time. When Spike shakes his head you can see the slobber fly and where it lands...your guess is as good as mine. I don't want to scare anyone away from owning one of these truly amazing animals. Not all Bulldogs slobber, I just happen to have one that does. They are one of the most loving, protective, and tremendously strong dogs I ever owned. When it all comes down to it, every ounce of the slobber is well worth it.

Update November 18, 1999 — from Sharon's proofreader: Besides drool flying on the walls when this dog shakes his head, and the wetness he can leave on your pants when he rests his chin on your leg, this dog makes terrible farts! It is awful, almost skunk-like. And he can stink up the house all day long! Thankfully, Spike is now on Beano, and it is helping, but he still has occasional smelly episodes.

WE LOVE YOU, SPIKE!!

Update January 2, 2000 — we have cut Spike’s treats and table scraps way down. His gas problem is much better. Bulldogs cannot handle a change in food. As much as Spike loves his treats, we have to spare the rest of the house and not give him any! 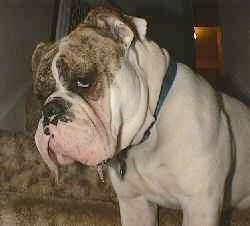 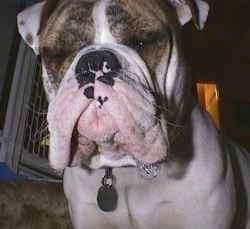