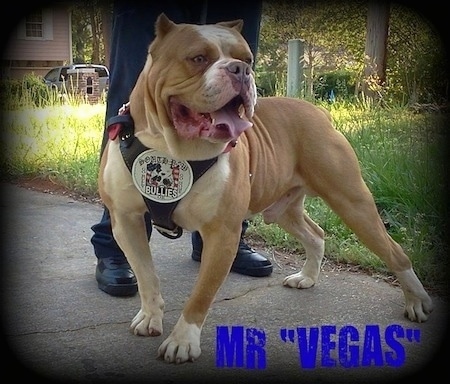 Mr. Vegas the Bandogge Mastiff at 4 years old—"Mr. Vegas is my best friend. He's exactly what an American Bandogge is: loyal, obedient and protective with those guard dog instincts. He won first place in the Bully Breed class at the Bully Palooza Dog Show in March 2012. He has produced some beautiful offspring. We are so proud of him. His specs are: weight 115 pounds of pure muscle and 21 inches at the withers. He is very agile and athletic."

The word "Bandogge" is the generic name for any Bulldog-type Mastiff breed. The Bandogge has a very prominent musculature and an angulation that gives the dog a very athletic and agile look. Most are black brindle but others colors include black, blue, red and tawny.

The Bandogge is an extremely intelligent dog. It is confident and very docile. Like all Mastiffs, they should have owners who are capable of staying dominant over the dogs. They are not usually recommended as good choices for first-time dog owners, because they need someone who truly understands canine instinct and how to properly communicate what it is you want from him. Although not bred as fighting dogs, if they are with a passive owner who does not know how to communicate aggression is not acceptable, they may become dog aggressive. Some people, mainly on the East Coast, still use this dog as a fighting dog. Luckily, there are more folks breeding these dogs for protection than for combat. As a protection dog, they are as a whole, excellent. They have a great deal of drive and are very tractable. The only temperament drawback to protection work is their unwillingness to perform the "bark" portion of the "bark and hold." As they are borne of fighting extraction, most dogs from this lineage do not bark as a warning; this is typically a difficult task. The American Bandogge is a breed that loves attention and thrives on leadership. If you are not this dog’s 100% pack leader and/or if you do not provide enough mental and physical exercise it will become very upset when left alone and will be hard to control. While they are happy to receive any attention and gladly accept whatever you give them, they absolutely need an owner who displays authority over them. They prefer to be with their owners and live to please and protect them, loving their families and protecting their domain. Bandogges can get along with other animals if they are raised with them, including kittens, cats and other dogs, but can be aggressive with animals they haven't been socialized with. They will protect themselves and their families to the end. Confident and very obedient, they are excellent with children. Bandogges seem to have a sense of when to be gentle. They are excellent family members as well as an intruder's worst nightmare. They are said to be "The Silent Peacekeepers." This breed may drool and slobber.

Bandogges will do okay in an apartment if sufficiently exercised. They are relatively inactive indoors and a small yard will do. This breed likes to be with its owner and would not enjoy life in a kennel.

These giant, short-haired dogs are easy to groom. Remove loose, dead hair with a rubber brush. This breed is an average shedder.

American Bandogges are not purebred dogs in the way we know the word "purebred." Their ancestry is of American Pit Bull Terrier and Neapolitan Mastiff. There are some kennels that do produce Bandogges successfully in many generations, without adding blood from other breeds, and have gained a homogeneous type. In the late 1960s a veterinarian by the name of Swinford began a breeding program which was ultimately to produce the greatest of all protection dogs. Though breeders of Bandogges today disagree on just what breeds went into Swinford's original breeding scheme, the general compromise is that it was 50% American Pit Bull Terrier and 50% very large molosser. The most common method employed to produce a Bandogge is to cross a good game male American Pit Bull Terrier with a large and strong Neapolitan Mastiff female. Another somewhat common method used in breeding the Bandogges is to cross an English Mastiff with an American Pit Bull Terrier. The American Canine Hybrid Club recognizes the American Bulldog crossed with a Mastiff as an American Bandogge. The Designer Dogs Kennel Club recognizes the American Bulldog crossed with the Mastiff as the American Masti-Bull. Also, a similar cross is the Pit Bull Terrier and the Bullmastiff cross, however this cross is not called a Bandogge, but rather a Pit Bullmastiff. The name Bandog was used in the old England by the Saxons and comes from the word Banda, a Saxon word for chain. It was common practice to tie the dog by day and release him at night to enable him to carry out his guard duties. 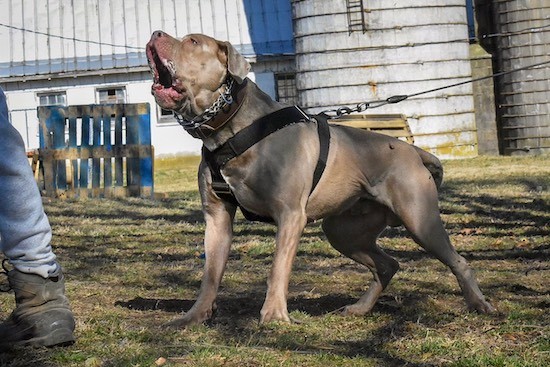 "Pictured is Savant’s Cairo, a 4 year old Bandog. He’s a deep generation hog dog cross out of Queensland Australia who excels in hog hunting and personal protection sports. He’s a true throwback to the functional Neapolitan Mastiff. He’s an extremely prey driven Mastiff, with strong nerves and strong defense drives. He’s social, stable, and a very biddable dog. Sitting at 28.5” and 120lbs, he’s surprisingly fast and agile on his feet. He produces well and is the foundation male at SavantK9."—Courtesy of SavantK9 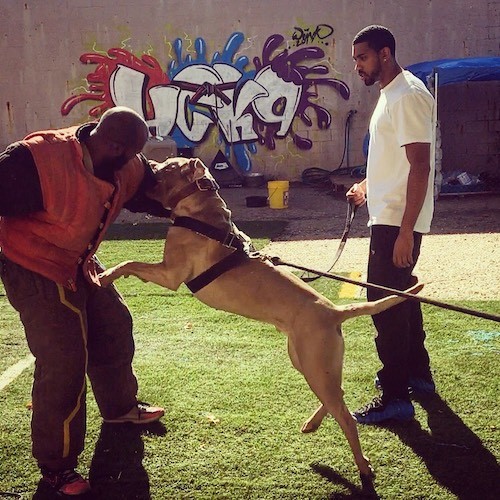 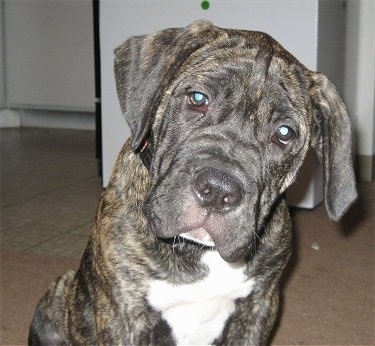 Radley the brindle male American Bandogge at 12 weeks; father is a Mastiff and mother an American Bulldog. 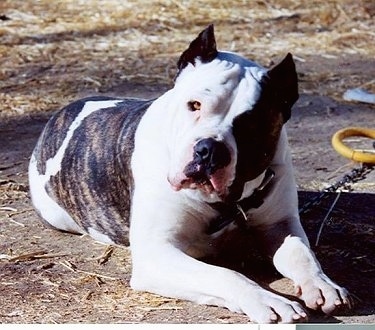 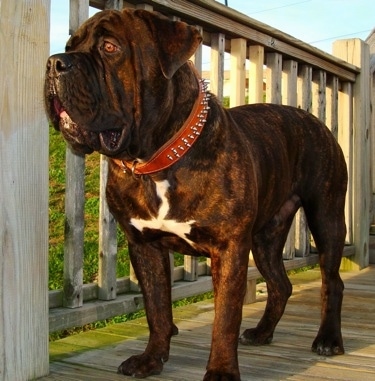