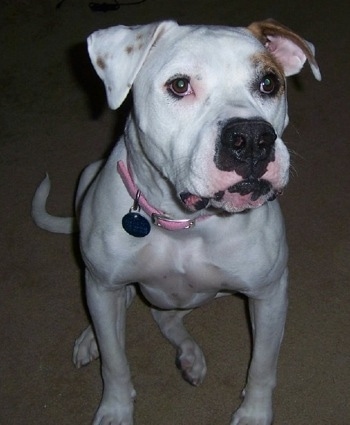 "We adopted Doja from a rescue center. She was skin and bones, and absolutely abused. She is very sweet, and she loves both of my two children, ages 3 and 9. We began walking her every day and started trying to bulk her up."

"We love watching the Dog Whisperer. I employ the techniques of Cesar Millan by pulling upward to the side on her leash, which does cause her to stop in her tracks. However, she is very tall (2'3" approx.), and I am very short (4'11"), so I can't pull up very far."

"We just wanted to share our pix of the new addition to our family of 3, which now is a family of 4!! We love Doja!!" 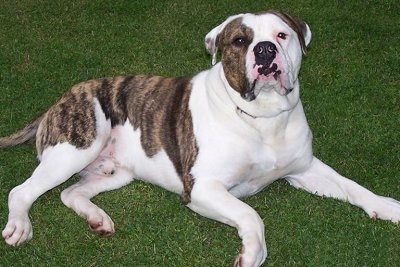 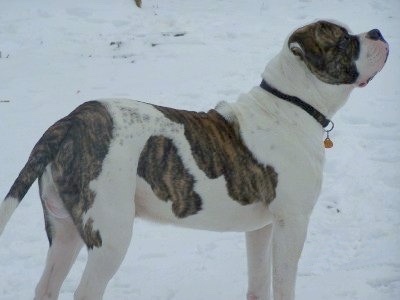 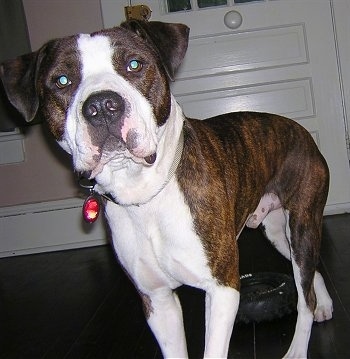 "Emmett, an American Bulldog rescued from a shelter, shown here at 2 years old. He is highly respectful of cats, very curious about making friends with them. Bowls you over if they cut an eye at him (my kitty did not want to play). They're tentative friends—she "head butts" her hello and he licks her head. He's about 75 lb., an incredibly fast learner. True to breed, doesn't bark, very stable, even when faced with aggressive dogs. A bit skittish when it comes to having his nails clipped, ears cleaned, and absolutely quaking scared of drums. Very strong—he picked me up and walked me across the floor when I was cleaning his ears; I'm about twice his size. On play dates he lets the other dog drink water first but he'll take the alpha role if you abdicate. He's not a runner, but he adores a good body check, owing to the breed’s original use as a catch-dog for hogs and cattle. He is very, very pain tolerant, which means I'm constantly checking his feet. He had gone on a run around the block with no limps, and I found a piece of glass in his foot. He has a 3' vertical leap (at least so far). He is still very much a puppy, and skips whenever we pass a porch someone might be on. He *loves* everyone, and can think of nothing better than making new friends." 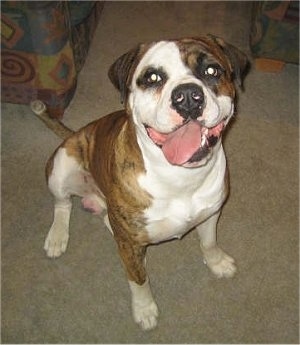 Joe Dirt Buckeye the American Bulldog at 1 year old—"The Joe Dirt name came of course from the movie with David Spade. This movie always makes me laugh and so does my dog. The Buckeye part of his name came from my boyfriend who is from Cleveland, Ohio and is a huge Buckeye football fan."

"Joe Dirt is a wonderful dog. He has a very playful but loving personality. Joe Dirt is also called Joe-Joe or Joey. He is a HUGE "sock-oholic" meaning that he loves to eat socks. He is also very fond of children. We live in a very family-oriented housing complex. Joe will sit at the front door and cry until we let him out if he hears the kids on the block playing without him."

"Joe Dirt is currently 97 lbs. and still growing. His father is 135 lbs. and gorgeous."

"Joe came from a litter of 10 which we raised. We have his mother also. Her name is Gixxer Cleveland and she is 4 years old." 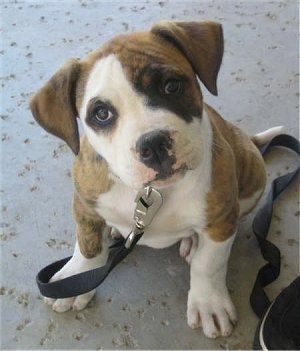 Joe Dirt Buckeye the American Bulldog as a puppy 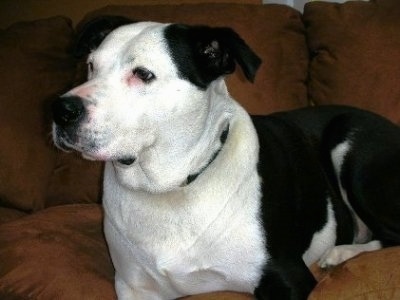 Malachi, a 3-year-old American Bulldog rescue—"He's so handsome. I am partial because he's my baby boy. He was a rescue with a sad story (previous owners burnt his face on an exhaust pipe!)" 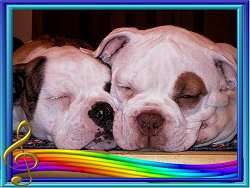 This is Chump the American Bulldog getting hugged by J. 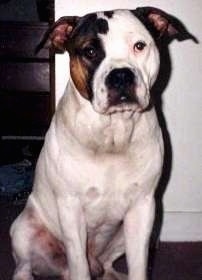 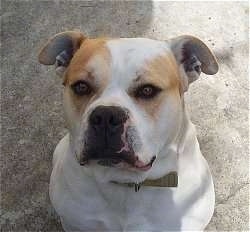 This is Leo, a very friendly American Bulldog. 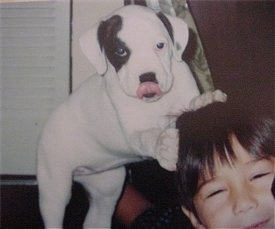 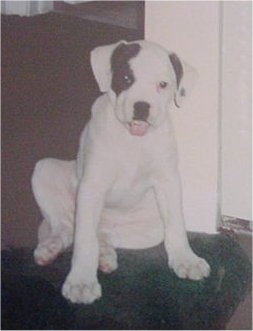 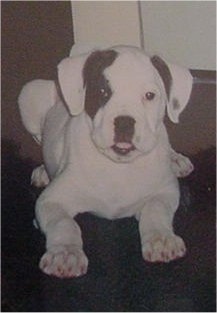 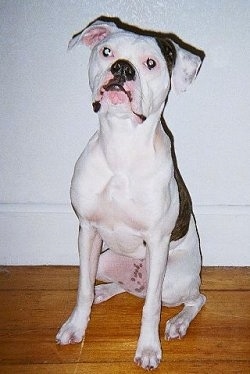