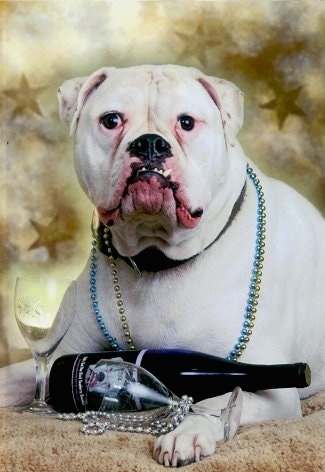 "This is SBK Bulletproof Brown—or, as we call him, Kevlar. This is a photo we had taken of him for labels for our homemade "Bad Dog" wine. He is the biggest clown imaginable, snores like a water buffalo, is incredibly strong and also incredibly clumsy. If you look closely at the label on the wine bottle, you will see another picture of him." 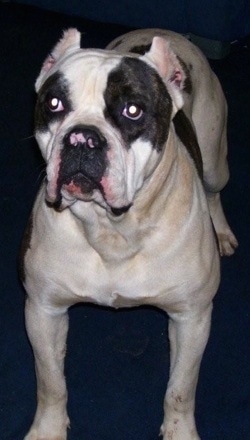 "Chili is a one-year-old American Bulldog with cropped ears. He has a great disposition and loves his exercise. He is very active which is why he is nice and calm around us. He loves to play with his spring pole and has been a pleasure to train." 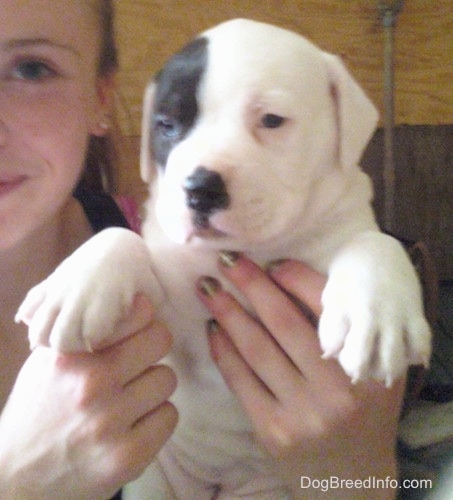 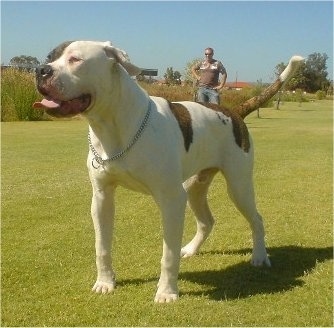 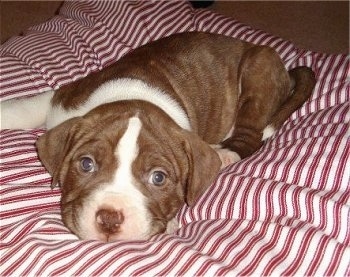 "Dozer the American Bulldog at 6 weeks old; both of Dozer's parents are from Johnson lines. Krajewski D335A KillDozer aka Dozer the first night home."

"Dozer at 9 weeks old; both of Dozer's parents are from Johnson lines. Krajewski D335A KillDozer aka Dozer relaxing—he walks great on a leash, sit, lay, roll over, and stay at 12 weeks old. He is the first dog I have ever had, and I am definitely impressed with his progress. I am waiting till he gets a little older, but I think he has a great temperament, and hopefully he will be able to become a therapy dog. I think that would not only be fun for him, but would also paint a very positive picture of this breed and the things they can accomplish." 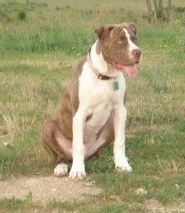 Tank the American Bulldog at 9 months old—"Tank is 9 months and weighs 96 pounds. He has a very laid-back personality. Very friendly with other dogs. Loves people, loves the water. Just started obedience training. Before any formal training he easily learned the basics (sit, stay, lie down ,shake, etc.). Although he is very large, he is a very good inside dog. In the six months that I have had him, he only has had one accident in the house. He is CKC registered. He was also crate trained in a matter of days. He is exercised daily. Extremely loyal to me and loving with anyone he meets. His mostly brindle markings I have been told and researched to be on the rare side." Harlee the American Bulldog at 7 months old—"She is the BIGGEST baby in the world. She thinks she is a lap dog. I've never been a big "dog person" until we got her. I never imagined myself loving a dog as much as I love her; I look at her as if she was my own child...she is the sweetest, funniest, most lovable dog in the world! Everyone tells me she is the best-looking dog they have ever seen, and I agree!" Buddy the 114-pound American Bulldog—"This is our Bully. This is what he thinks he was put on this earth to do. His registered name is "The Game's Tankus Maximus.” We just call him Buddy. He weighs 114 pounds and lives with a female mixed breed that is 45 pounds lighter than he is. She is the alpha dog. I guess he just doesn't know he is bigger than she is." Cassius, seen here wearing a lifejacket made for humans, is a purebred American Bulldog with champion bloodlines. He was 18 months old when this picture was taken. I took this picture of him when we took him out on the Puget Sound on a boat. We didn't expect him to get so excited about the water; he leaned very far over the edge of the boat, so to be safe we put a flotation device on him since he is not a very strong swimmer. He is a very sweet and well-behaved dog, although he can get overly excited in some situations. He has a lot of energy.