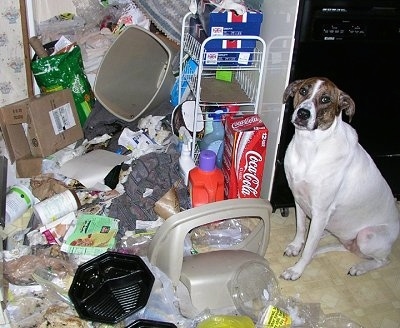 "I took this picture when I came home from a short errand this morning. Maya, a 2-year-old English Pointer mix appears to think that emptying the entire trash basket from the closet onto the kitchen floor is the way to get even when I leave the house without her." 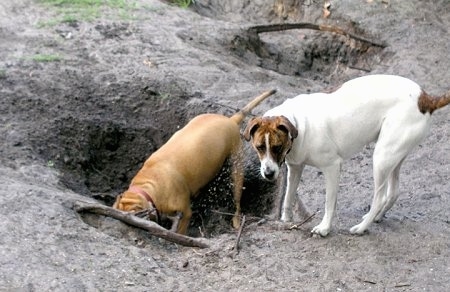 My backup dog, Baby J, a 6-year-old Pit Bull mix has another way of venting her frustrations. She is trying to set a world's record for digging the largest holes in the shortest time in the places she is not supposed to dig. Like the front yard only a few feet from the stairs. Not too long ago, this was all grass. I took this from a hall window. Here she uses Maya as a lookout." "Baby J taking a break from her excavation. Her objective, it seems, is to break as many tree roots as she can on the way to China."

"When I came outside, she hid herself in another hole. Like, "Pretend you can't see me."" 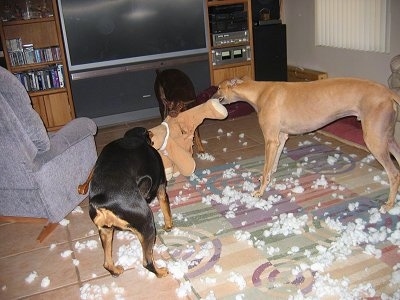 "I love this picture of three of my four dogs (we have one more black Doberman). Wendy (red Doberman): very sweet, timid and very submissive dog. Stewie (the best  Greyhound ever ): the only boy of the pack and perfect couch potato. Lucy (black Doberman): alpha female, leader of the pack right after me. Instigator and troublemaker until Dina came along. Dina is winning (not in the picture). The stuffed bear was around for a while until they made a tiny little hole in it. That was all it took for them to realize that it was more fun to take all its guts out. LUCY, as usual, was the instigator and the other two the followers. All three had a blast. A month later I still found beads under the couch." 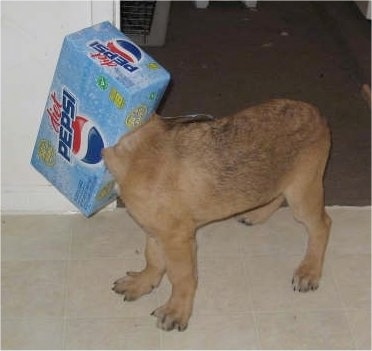 "I heard some banging in the kitchen and when I looked in I saw Diablo, my 3½-month-old Saint Bernard / German Shepherd puppy stuck in an empty pop box! I know I should have grabbed the box off before I grabbed the camera, but who could have resisted this?!!" 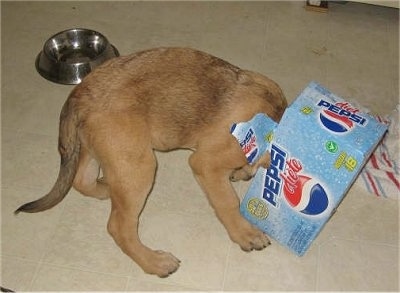 Maggie Mae the Shih-Pom puppy at 10 weeks old. "I was watching football and enjoying some Wheat Thins. I left the living room to answer the phone and when I returned, Maggie's head was buried in the box of Wheat Thins. She managed to eat over half the box. I know eating half a box of Wheat Thins is not good for her but it was so hilarious that I just had to take a photo!"

"The following photos are of my Shih-Pom puppy, Maggie Mae. She is a nosy little girl that gets into EVERYTHING! The first two photos are of her drinking coffee out of two of my coffee mugs. Both times she had been sleeping while I was enjoying my cup of coffee. Without thinking, I left my unfinished coffee cups sitting out and when she woke up, she went to town drinking the remainder of the coffee. I've never seen a dog who LOVES coffee so much! When she sees me drinking out of a coffee mug, she literally begs for it.... She stands up on her hind legs and whimpers." 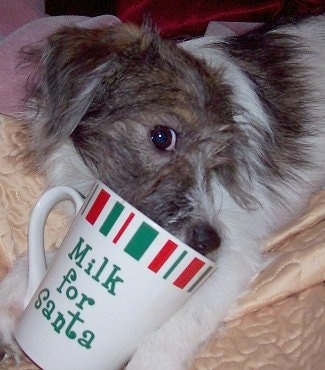 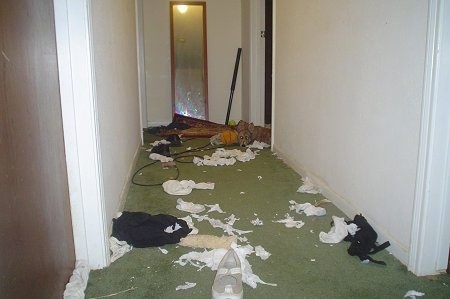 "Lance's Hall of Destruction: I got Lance from a shelter when he was about 8 weeks. He might be some kind of cattle dog mix. I came home from working overtime and decided to take a nice, long nap. I guess Lance was a little disappointed that I didn't play with him as I usually would do, so he took matters into his own jaws. He's barely visible, at the end of all the trash, clothes, etc., by the open door." "Molly, my two-year-old Chihuahua caught in the act of disemboweling a stuffed bunny. She sure had fun!"