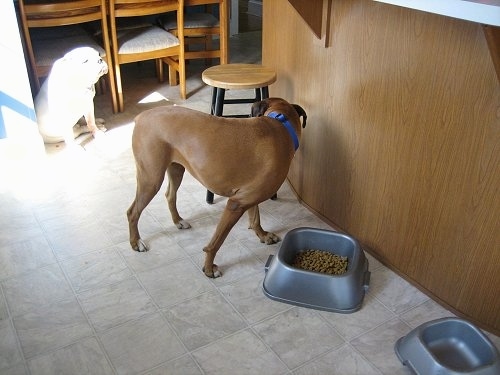 "The following story is of Allie the Boxer and Spike the Bulldog. Allie was a pretty dominant alpha female. A few years after this page was written, I began to concentrate on a natural dog behavior aproach and was able to get all of Allie's dominant behaviors under control, including her attacks on other dogs."

Allie the Boxer does not like to let her brother Spike the Bulldog eat. The two of them are constantly fighting over the food bowl. Allie is a female and Spike is a male. I have to say it is Allie who is the major instigator. Spike the Bulldog is pretty laid back. Allie is a typical female dog, wanting to be the boss and have things her way. If Spike really decides he wants to eat he puts her in her place, however they usually just growl at one another during meal time.

Allie will do anything to keep Spike from being able to eat. 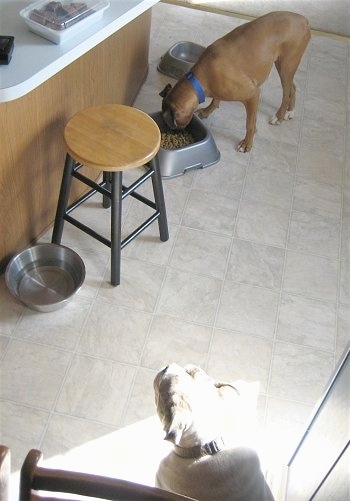 The first thing she does is try to eat all of the food herself. 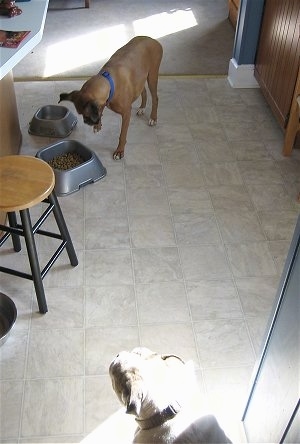 Of course there is too much food in the bowl for her to do that so she resorts to the only other thing she can think of...getting rid of that food bowl! 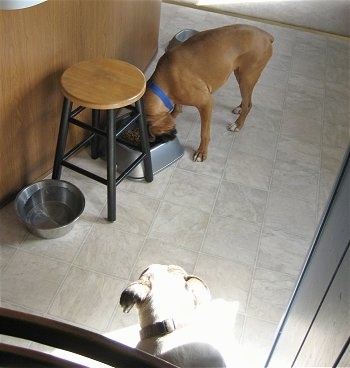 She starts pushing it around with her snout. She often spills her water in the process. 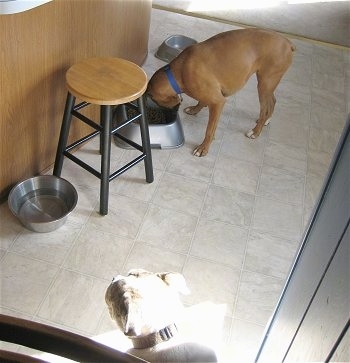 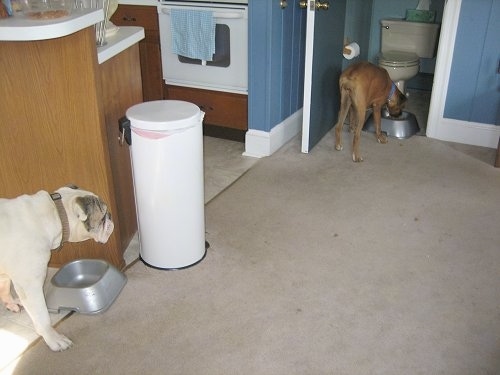 Here Allie has successfully pushed the food into the bathroom, a place neither dog is allowed to go. They are not allowed in the carpeted parts of the house. Allie will sneak in there; Spike is usually good and stays out. 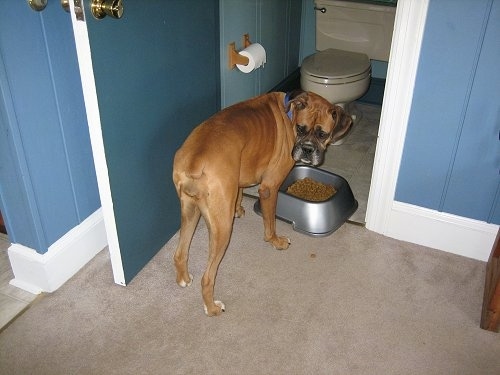 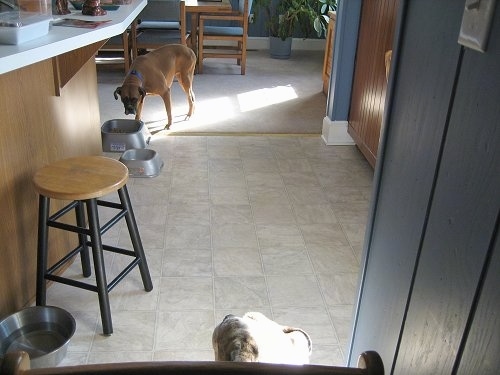 I put the food bowl back and tell Allie to get out of that room. 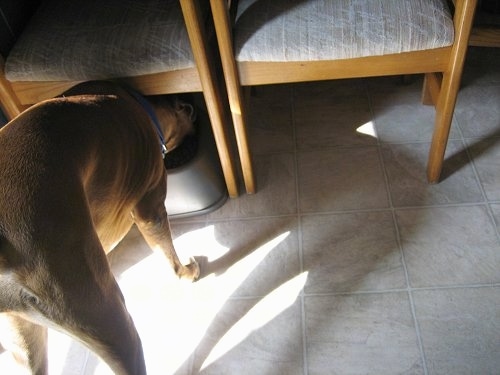 So she pushes the bowl under the kitchen chairs. Once again I put the bowl back where it belongs. 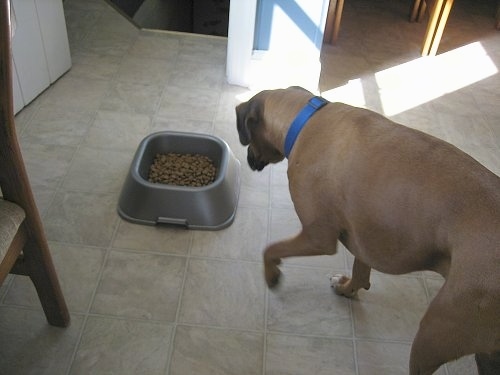 Allie is still stuck on getting rid of that bowl, so she decides to push the bowl down the basement steps! The best spot for her and worst spot for me! 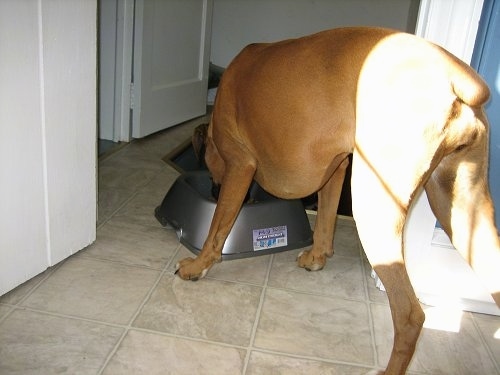 Allie is nosing the bowl closer to the steps. 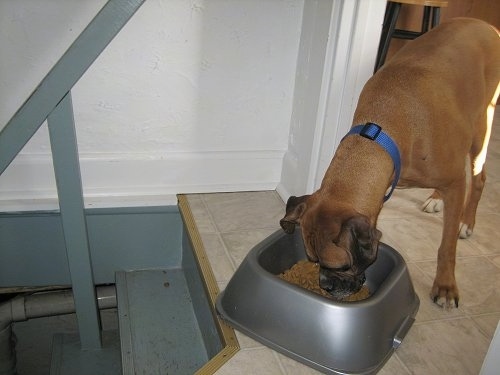 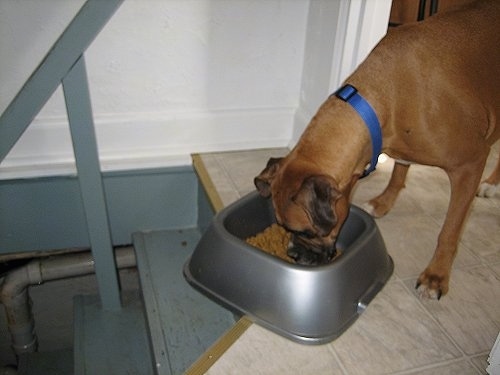 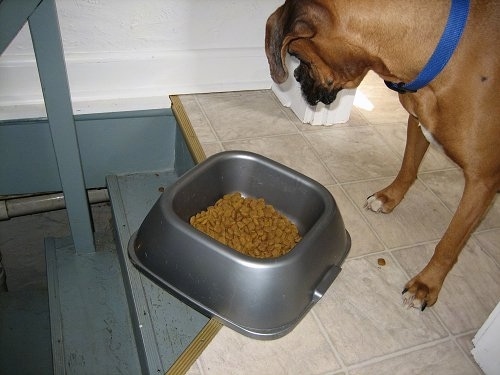 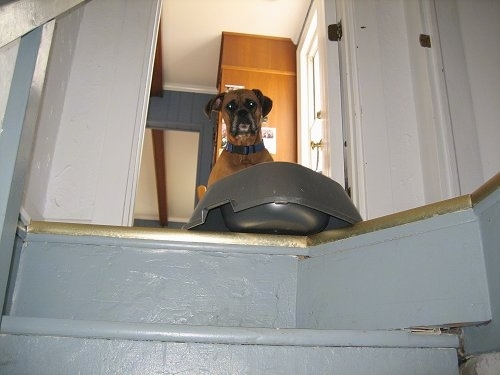 One more push and this bowl would have been GONE! She's pushed the bowl down these stairs many times! In this house you never know WHERE you will find that food bowl. We often have to go looking for it when it's time to feed the dogs. I have even found the bowl in the living room! 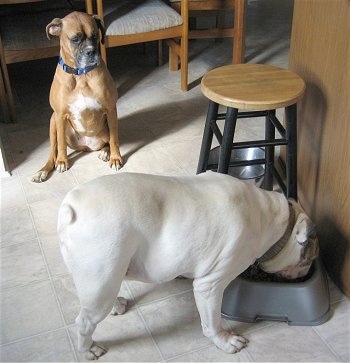 I put the bowl back once again and this time Spike decides he is going to eat once and for all! Allie is not happy about this. 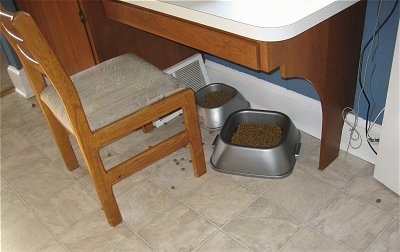 Allie decided today she would hide the food under the kitchen desk. Maybe Spike won’t see them under there!? 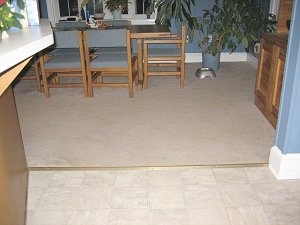 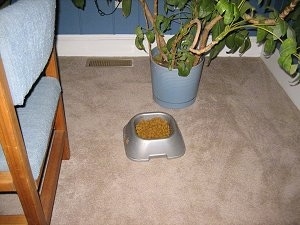 Another place Allie hid her food—remember, the dogs are not allowed on the carpeted area. Spike will not go in this room for the food; Allie on the other hand... 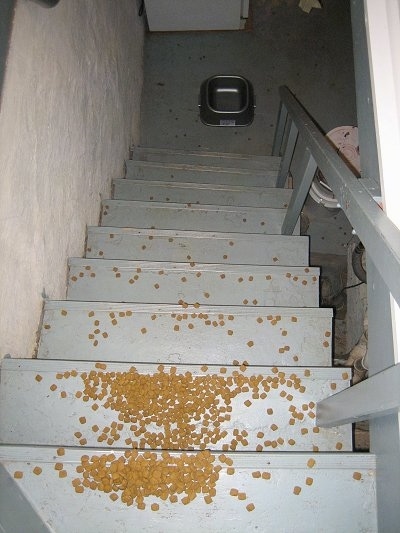 My family and I were about to sit down and watch a movie on a Saturday night when we hear "CRASH" and we knew Allie succeeded in getting "rid" of the food. To top it all off, this was right after she got herself sprayed by a skunk, and my daughter and I spent the last half hour with a dog, bathtub and a bottle of Skunk Off! 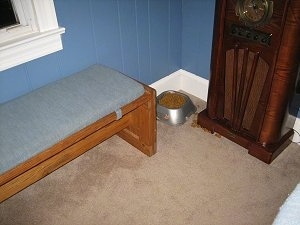 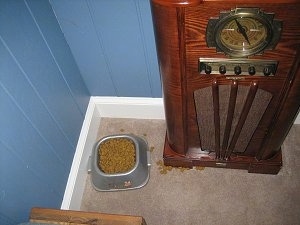 BTW, this is where I later found the second food bowl—in the far back corner of the dining room, a room neither dog is allowed to go into.

Friends have told me since Allie was sprayed by the skunk, maybe she will learn not to chase the skunk. Well, Allie has been sprayed twice by a skunk and this is her the very next day after getting sprayed for the second time. She wants to go outside. I opened up the door and what do you think I smelled? You guessed it, SKUNK! So I didn't let her out. Does it look like Allie has learned her lesson? Take a look at this video clip of her wanting to go out and chase the skunk. She is non-stop relentlessly asking!