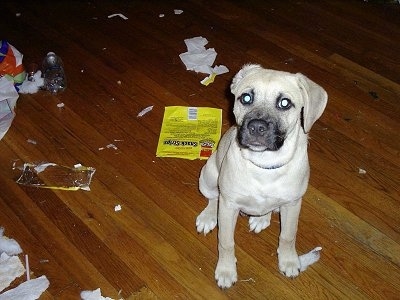 Orson the Puggle caught in the act! "Or rather after the act... This is a photo I took of Orson at 8 months old when I returned home one day and found trash strewn across my kitchen floor. There sat Orson, looking like nothing was wrong. How could I be upset with him looking like that?" 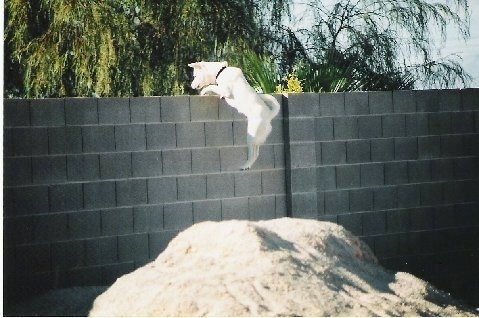 Wedah the Jindo. She is jumping the wall—a big no-no! She has never made it over but has really tried. She just wants to see the dog on the other side. She is actually jumping from ground level on the other side of that hill you see. The wall is 6' tall. She has been bitten by the dog next door...the other dog did some jumping of her own and bit my dog’s foot. We no longer let her go outside alone.

Wedah's owner further states, "My Wedah is awesome...she is my second Jindo. My last one lived 15 1/2 years. We just had to have another. And I have to say they both are wonderful with kids. We have two young children and have taught them to respect all animals." 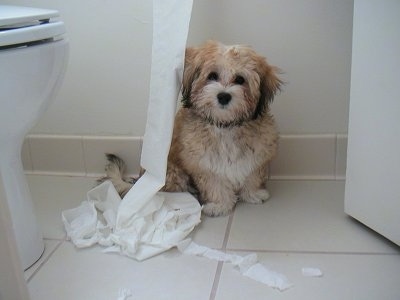 Zoe the Havanese at 4 months old caught in the act of a toilet paper raid. 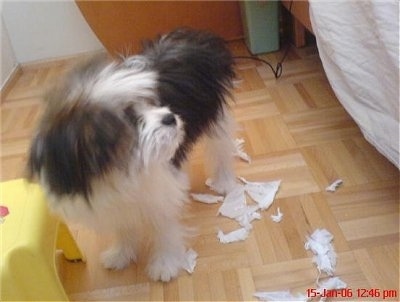 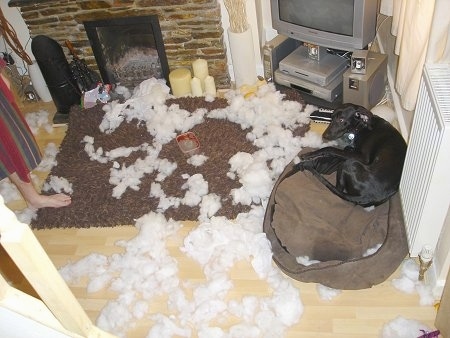 Boris the Labmaraner (Weimaraner / Lab cross) puppy at 5 months, up to no good. His owner states, "He wasn't impressed with us staying in bed on a Sunday morning so he shredded the sofa cushions! Much to our amusement, we covered him in the fluff and he looked like a sheep!!" 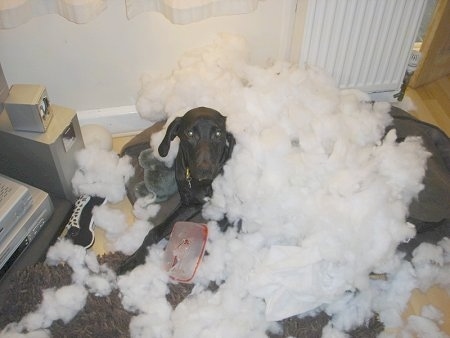 Boris the Labmaraner (Weimaraner / Lab cross) puppy at 5 months, up to no good 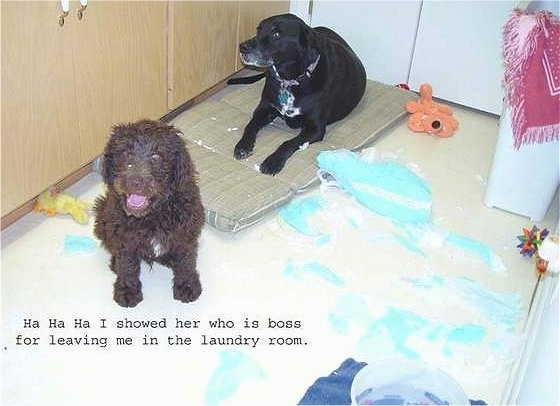 “Ha ha ha, I showed her who is boss for leaving me in the laundry room.” thinks the Goldendoodle puppy from Yabbadabbadoodles (and somehow we all know the nice old Lab in the background didn't do it—it was the puppy!) One might think the looks on their faces give it away. The Lab looks guilty, but most people who own more than one dog know it's usually the GOOD dog that looks guilty. The culprit of the crime is usually the one with the big happy smirk on its face! "Who, me? Naaaa, HE did it! I'm too cute to do something like that!" ;-)