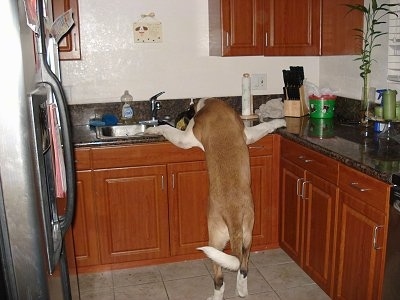 "This is Ceasar, our St. Bernard. It was in the middle of the night and I kept hearing strange sounds coming from the kitchen so I got my camera and went to investigate. With just using the flash I took this picture and discovered him licking the dishes clean from dinner!" 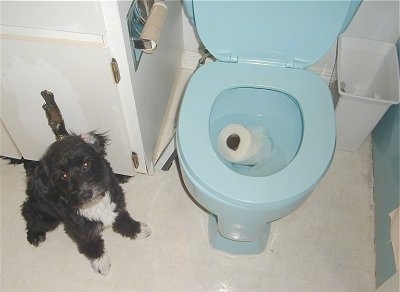 "Rozzi, my Poodle / Bichon / Scottie mix after she knocked the whole toilet paper roll into the toilet. I guess the counter wasn't high enough anymore!!!" 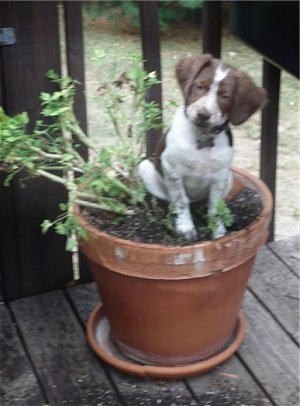 "My wife took this picture when she caught Zoey, our 12-week-old Brittany doing a little gardening of her own. Her brother Zach was sitting a few feet away with an ’I'm going to tell’ look on his face. She is always the one getting into trouble while he sets back waiting for dinnertime to roll around again. Hopefully Zoey's desire to ’garden’ goes away before next spring. She and my wife may come to a showdown over the Geraniums!" 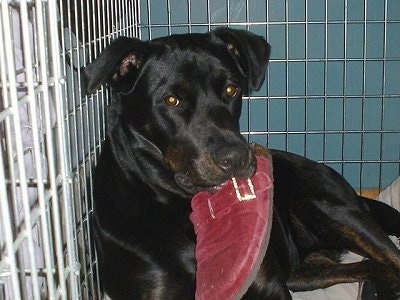 "This is a picture of my dog Lila caught in the act of stealing a shoe!! This dog is a Lab / Rottie mix and is being raised by my girlfriend and I; two college students. We are having major discipline problems with our dog and are on our last nerves!! She is the worst dog I've ever seen—she steals things and runs under the table and chews them up, barks/growls/bites when you're even close to her while she is eating, jumps and digs and almost everything you can think of." 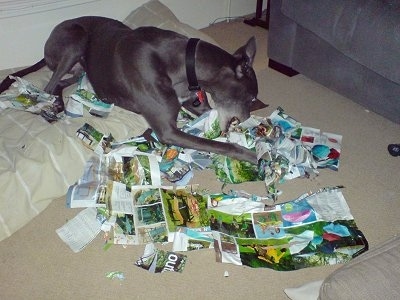 "Razor caught in the act of ripping apart one of our magazines, having lots of fun! He is a rescue greyhound who used to race (racing name 'Next for Shaving') but wasn't very quick. We adopted him 6 months ago and he is wonderful!" 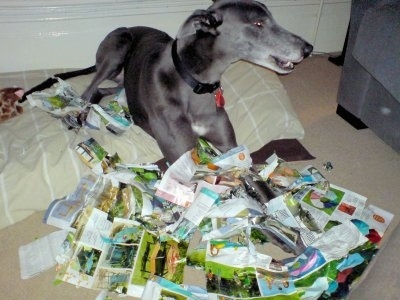 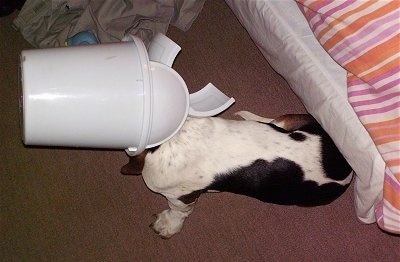 "This is a photo of my dog Zoë, a Basset. In this photo she was 4 months old. She is very nosy and always wants to check that everything is OK and just wants to make sure that we do not need her help for whatever reason. On this day she decided that she must inspect the trash can, like a few times before, and as I walked into the room I noticed this. The second thing I did after laughing a lot was to get the camera and take a photo." 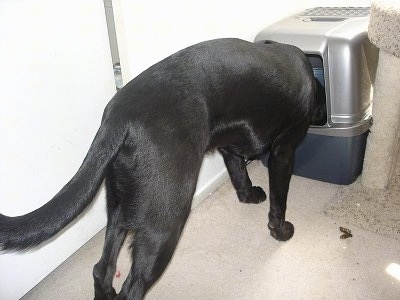 "A funny picture of my dog eating what she's definitely not supposed to. This is my crazy dog Nyx (pronounced Nicks ). She is always getting into the cat litter boxes!!!! She is a Lab mix (with some Mallorquin Shepherd her) and is about 11 months old." 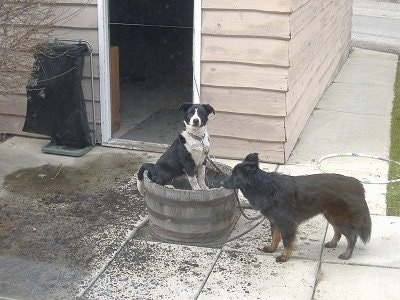 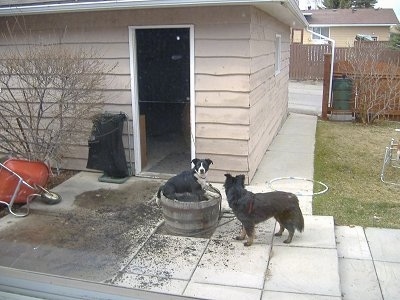 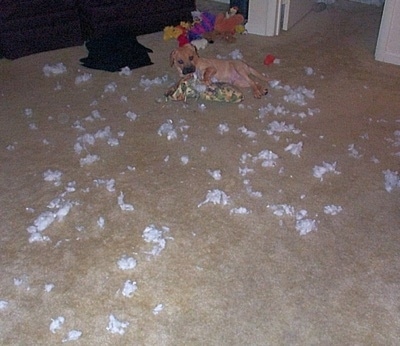 "I've always had purebreds, but after a checkup with my doctor, she asked if I wanted a dog. No way!! But...what kind are they? My biggest mistake! ;)"

"She knew someone that was taking 11 puppies to the pound that very day to have them put down, and that's what tugged at my heart. I told her to call the lady, which she did, and she brought the puppies by the doctor's office on her way to the pound. Hence how I became the owner of Boudreaux (we call him Boo). The previous owner had no idea what breed this dog is, but my vet and I have decided it must be a mix between a Rhodesian Ridgeback and a Lab, with possible other breeds."

"Very soon, we found out this poor guy was born without a hip joint and at about 2 months old, had major emergency surgery on his hip. Going into the surgery we had no idea if he would even come out alive. There were only three possibilities and this surgery was not something normally done. He could either do okay, be a three-legged dog, or have to be put down. We took our chances because the pain level was way too high to just let go."

"Here he is at just past 3 months old, getting into more mischief than any one dog has a right to!!  ;)"

"Although I provide my dogs with loads of chew items and toys, he can't resist anything that he shouldn't have. He has torn up two of my dining room chair cushions, numerous pillows, shoes, slippers, moldings, door facings, and even my carpet! He even chewed up the original cushion on top of my 38-year-old hope chest.  He may be big and clumsy, but he sure is fast."

"Here he is, spreading more pillow filling from another dining room chair cushion. Of course, he usually sits up straight and looks at me as if to say ’I didn't do it!’ before I can grab the camera, so I got lucky this day. Something about the filling in toys, pillows and cushions that he simply cannot resist."

"It's a good thing we love him so much, but patience is another story. He had better hope it holds out. ;)"

"I hope you enjoy seeing a picture of one of my loved ones. This is my third puppy, so I went in to this eyes wide open, but not sure my back is going to hold out much longer. ;)"