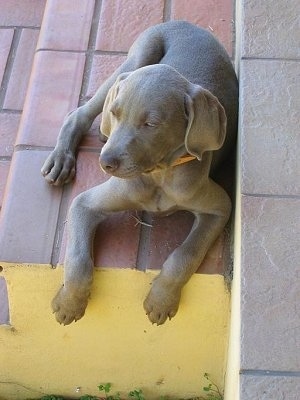 Otto the Weimaraner as a puppy at 3 months 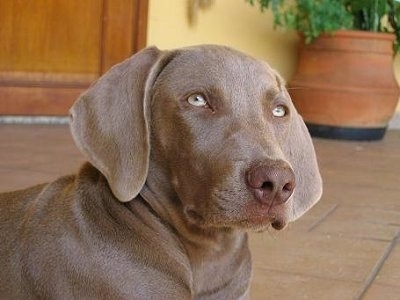 Otto the Weimaraner as a puppy at 5 months 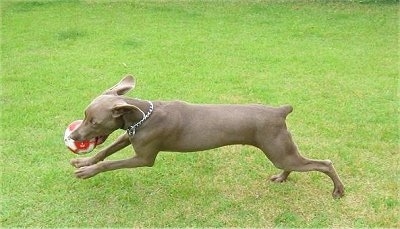 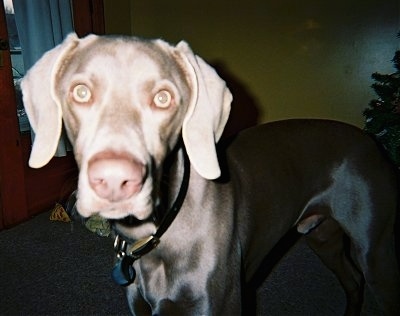 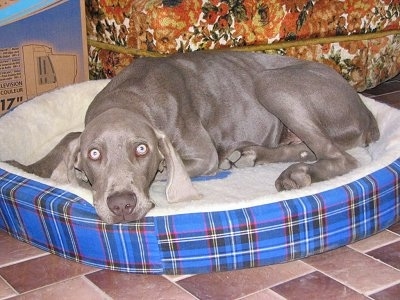 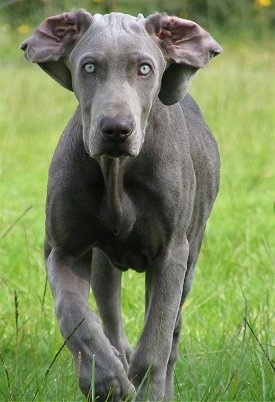 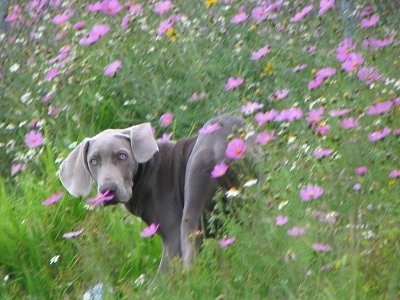 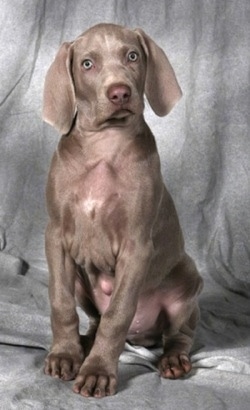 "This is our Weimaraner at 2 1/2 months old. His name is Charlie! He has a very good temperament. He is extremely smart, great with people, cats, dogs and is a momma's boy! Hey absolutely loves playing with our 10-month-old cat. Charlie will lie on his back with his feet up in the air and let the cat pounce, play and roughhouse on his stomach, head and ears. Charlie mimics what the cat does, too. Charlie will paw at the cat's face and body, just like cats paw at floor model balls on a tall spring. It is very funny and cute to watch.

"Charlie likes pretty much anything that he can play with such as...regular dog toys, cats, paper towel rolls

and ribs. Those are his favorite!

"There isn't much that Charlie doesn't like. However, he isn't too fond of being in his crate (we are working every day to get him used to it). He is a puppy still and as for all puppies, the one thing they don't like to hear is "no"!!! Ha! He knows what it means and 95% of the time he obeys. Every now and then he likes to push his limits, but quickly learns that he is part of the pack and not the pack leader (thanks, Cesar!).

"Good habits: He knows where to go to the bathroom. That's always a plus!

"Bad habits: Every chance he gets when he is outside is loves to find rocks to chew on. He also loves wood.

"Exercise: He gets lots of it! We live on a large hobby farm with a 5-acre fenced-in yard. In addition, he gets lots of walks and loves to run!

"I believe that Charlie is making great strides every day to becoming a well-balanced dog. He's a puppy, so every day is a new learning experience, adventure and new path to becoming well balanced.

"I watch Cesar Millan aka the "Dog Whisperer." I think what he does is fascinating and wonderful. One of the many things I learn and use by watching his show is that if the human is calm/assertive your dog will have a waaaay better chance of being calm/assertive. Especially when you are trying to raise a puppy. Charlie has responded very well with me using the calm/assertive technique. He listens much better and the most important thing is that Charlie and I are much happier!"